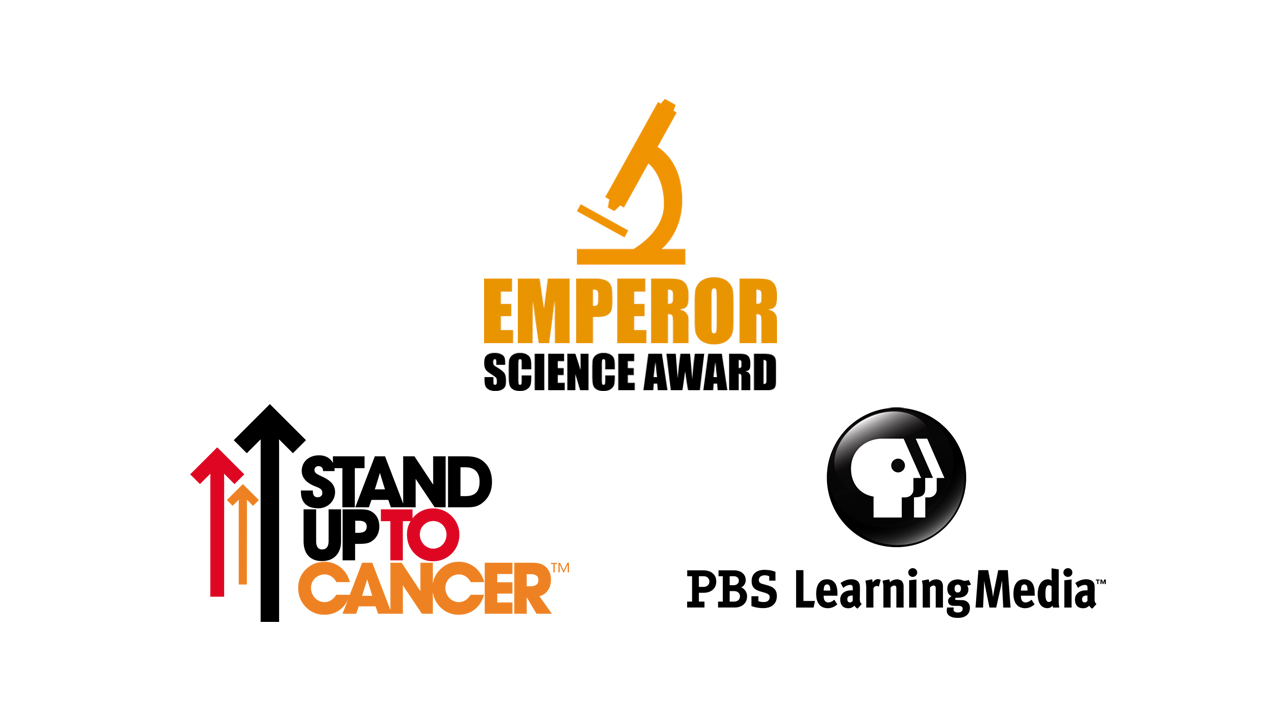 January 10, 2017: Stand Up To Cancer (SU2C), a program of the Entertainment Industry Foundation, and PBS LearningMedia, a media-on-demand service designed for pre-K-12 classrooms, announced today the opening of applications for the second year of The Emperor Science Award program. The Emperor Science Award program is an initiative designed to encourage high school students to explore careers in science, specifically cancer research and care, through a unique mentoring opportunity. The program aims to empower high school students to become the next generation of cancer researchers and will award 100 students this year, the second year of a three-year commitment, with an opportunity to work with an esteemed university-level research scientist on a rewarding multi-week cancer research project. The inaugural year of the program received more than 1,200 entries from eligible students throughout the U.S.

The education initiative was first announced in spring 2015 by SU2C co-founder Katie Couric at Columbia University in connection with Ken Burns Presents CANCER: THE EMPEROR OF ALL MALADIES A Film by Barak Goodman, a three-part film on the history of cancer that aired on PBS in the spring of 2015.

“From the outset, it was an important goal for the documentary not only to inform, but also to engage and empower young people to pursue scientific careers, particularly in cancer research. As we open the application process for the second year of Emperor Science Awards, the documentary continues to have an impact as we encourage students to explore the possibility of becoming the next generation of cancer researchers,” said SU2C co-founder Sherry Lansing, who led the committee that conceived and implemented this plan.

Entry is open to 10th and 11th grade students in the U.S. who have a strong scientific interest, especially in cancer research and care. Students from all socio-economic backgrounds and from anywhere in the continental U.S. are encouraged to apply. Entries will be accepted from January 10 through March 17, 2017, 11:59 pm ET. In addition to the mentoring opportunity, students will also be awarded a Google Chrome Notebook to enhance their studies and to extend the reach of mentors to students living beyond reasonable travel distance to their medical research centers, a $1,500 stipend for expenses, and the opportunity to continue the mentoring program, through high school, to further their academic pursuits. All students, including those who receive Emperor Science Awards, will be eligible to re-apply in subsequent years.

“The Emperor Science Award has been an amazing and rewarding experience for me and helped to reiterate my passion for science. As a result, now I am considering conducting biological research as my career,” says Nafilah C., 2016 award recipient.

Students, teachers, guidance counselors, administrators and parents can visit The Emperor Science Award website (www.EmperorScienceAward.com) to learn more about the program and to apply. The webpage contains an overview of the program and associated resources for students and educators. To enter, students will be asked to complete an application and submit a 750 maximum word essay on the following topic:

“Cancer has been referred to as ‘The Emperor of All Maladies’ and millions of people around the world are looking for a cure. In America, more than 1,600 people die each day. Tell us why scientific research is so important in helping to find a cure for cancer. And if you could be a scientific researcher, what would you study and why?”

Essays will be judged on sincerity, creativity, clarity and persuasiveness.

Winning students will be connected with science mentors from a host of high-profile medical research centers, including more than 100 SU2C-affiliated institutions, universities and industry leaders in cancer diagnosis and treatment.

The Emperor Science Award Program has been made possible by generous support from Founding Donors Genentech, Bristol-Myers Squibb Company and Novartis. Their support will fund a total of 300 awards through the first three years.

This initiative was organized by the CANCER: THE EMPEROR OF ALL MALADIES Education Subcommittee, chaired by Sherry Lansing, SU2C co-founder, chairperson of the Entertainment Industry Foundation’s Board of Directors and founder of the Sherry Lansing Foundation. The Emperor Science Awards are administered by PBS LearningMedia, a national expert in curriculum and student engagement.

About Stand Up To Cancer
Stand Up To Cancer (SU2C) raises funds to accelerate the pace of research to get new therapies to patients quickly and save lives now. SU2C, a program of the Entertainment Industry Foundation (EIF), a 501(c)(3) charitable organization, was established in 2008 by film and media leaders who utilize the industry’s resources to engage the public in supporting a new, collaborative model of cancer research, and to increase awareness about cancer prevention as well as progress being made in the fight against the disease. As SU2C’s scientific partner, the American Association for Cancer Research (AACR) and a Scientific Advisory Committee led by Nobel Laureate Phillip A. Sharp, PhD, conduct rigorous, competitive review processes to identify the best research proposals to recommend for funding, oversee grants administration and provide expert review of research progress.

For more information on Stand Up To Cancer, visit www.standup2cancer.org.

About PBS LearningMedia
As America’s largest classroom, PBS offers digital content and services for teachers of children from pre-K through 12th grade that help bring classroom lessons to life. PBS LearningMedia, a partnership of PBS and WGBH Educational Foundation, is a free and paid media-on-demand service offering educators access to the best of public media and delivers research-based, classroom-ready digital learning experiences to engage students in exploring curriculum concepts that align with National and Common Core State Standards. Nationwide, more than 1.8 million teachers and users have registered access to more than 120,000 digital resources available through PBS LearningMedia.

For images and additional information on Ken Burns Presents CANCER: THE EMPEROR OF ALL MALADIES A Film by Barak Goodman and other PBS programs, visit PBS PressRoom at pbs.org/pressroom.