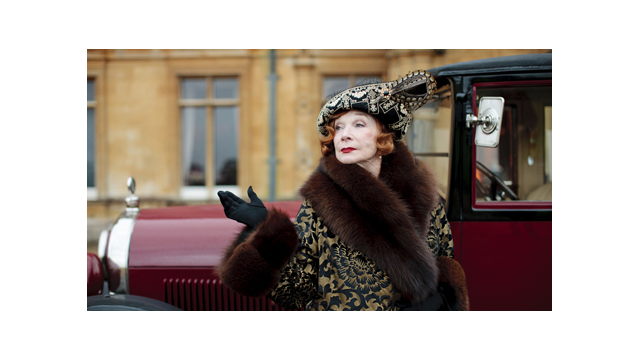 – 7.9 Million Viewers Tuned In For Premiere –

ARLINGTON, VA; January 7, 2013 – PBS and WGBH announced today that the premiere of MASTERPIECE CLASSIC “Downton Abbey, Season 3” captivated viewers nationwide, building on the love affair with the series that started two years ago. An average audience of 7.9 million viewers tuned in for Sunday’s premiere. (Nielsen Fast National data, 5.1 household rating.) The third season premiere of the Emmy® and Golden Globe® Award-winning series, a Carnival/MASTERPIECE co-production, quadrupled the average PBS primetime rating, and exceeded the average rating of the second season premiere of “Downton Abbey” by 96 percent (based on metered market averages).

“Downton Abbey’ continues to enthrall audiences nationwide, and this season is especially riveting with the addition of Shirley MacLaine to the cast and the lively interaction between her and Maggie Smith,” said PBS president and CEO Paula Kerger. “I’m so pleased that audiences have returned to ‘Downton Abbey’ on their local stations to continue to enjoy some of the best drama on television.”

“The well-loved characters that made Season 2 the most-watched series in MASTERPIECE history continue to delight us,” said MASTERPIECE executive producer Rebecca Eaton. “I’m thrilled to see so many viewers return to the Crawley family’s delicious drama and intrigue.”

The new season, which rejoins the story as the Great War is over and the long-awaited engagement of Lady Mary and Matthew is on, will be available on the PBS Video Portal after each national broadcast for a limited time (watch the season premiere here). All three seasons can be purchased on shoppbs.org, iTunes, Amazon Instant Video, Xbox, Google Play, and Vudu.

Beginning Wednesday, December 26, “Downton” fans were given the opportunity to watch a sneak preview of the opening minutes of Season 3 on the PBS and MASTERPIECE Facebook pages. Available for only two weeks, the preview apps earned more than 150,000 fan views. The frenzy on Facebook grew on January 6, with more than 42,500 user “likes” and 5,000 shares on a single post asking if they were excited about the premiere.

Fans continue to engage with the show and each other on Twitter, as PBS and MASTERPIECE insiders — as well as moderators from Austenprose (@austenprose), The Daily Beast (@televisionary), Tom and Lorenzo (@tomandlorenzo) and Vulture (@vulture) — host live discussions during each broadcast. According to SocialGuide Intelligence, the conversation for Downton Abbey garnered nearly 100,000 tweets during the premiere evening. In addition, since January 1, there have been more than 20,500 individual check-ins to “Downton Abbey” using the GetGlue entertainment social network, with a social media reach of more than 8.5 million people.

Since the premiere of “Downton Abbey, Season 1” on January 9, 2011, the critically acclaimed series has gained popularity across a diverse audience and has been honored with nine Primetime Emmy®Awards, including Outstanding Supporting Actress in a Drama Series (Dame Maggie Smith). It has also garnered a Golden Globe® Award for Best Miniseries, a PGA (Producers’ Guild of America) Award and a TCA (Television Critics Association) Award.

“Downton Abbey” is a Carnival/Masterpiece Co-Production.

About MASTERPIECE MASTERPIECE is presented on PBS by WGBH Boston. Rebecca Eaton is Executive Producer for MASTERPIECE. Funding for the series is provided by Viking River Cruises and Ralph Lauren Corporation with additional support from public television viewers and contributors to The MASTERPIECE Trust, created to help ensure the series’ future.

About WGBH WGBH Boston is America’s preeminent public broadcaster and the largest producer of PBS content for TV and the Web, including Masterpiece, Antiques Roadshow, Frontline, Nova, American Experience, Arthur, Curious George, and more than a dozen other prime-time, lifestyle, and children’s series. WGBH also is a leader in educational multimedia, including PBS LearningMedia, and a pioneer in technologies and services that make media accessible to the 36 million Americans who are deaf, hard of hearing, blind, or visually impaired. WGBH has been recognized with hundreds of honors: Emmys, Peabodys, duPont-Columbia Awards…even two Oscars. Find more information at www.wgbh.org.