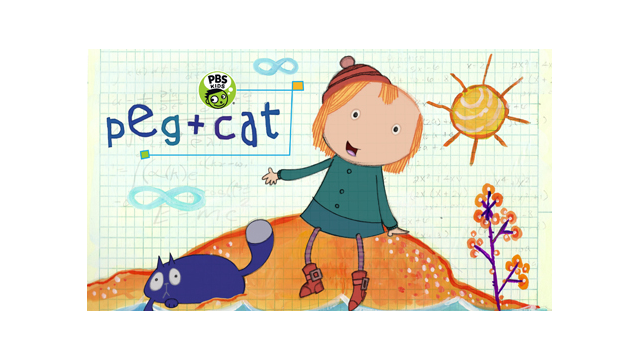 Media property focuses on problem-solving and foundational math concepts and skills on-air, online, on mobile and in the community

PEG + CAT was created by Billy Aronson (Rent, Postcards from Buster) and Jennifer Oxley (Little Bill, The Wonder Pets!) of 9ate7 Productions, and is a production of The Fred Rogers Company. Each episode features a story in which Peg and Cat encounter an unexpected challenge that requires them to use math and problem-solving skills in order to save the day. Their adventures take viewers from a farm to a distant planet, from a pirate island to a prehistoric valley, from Romeo and Juliet's Verona to Cleopatra's Egypt to New York's Radio City Music Hall. While teaching specific math lessons, the series displays the value of resilience and perseverance in problem-solving.

PEG + CAT is a multiplatform media experience that includes interactive mobile and online content. The property offers games and other resources online at pbskids.org/peg, and additional interactive features, including more games, streaming video, parent and educator resources and a mobile app, are slated to launch along with the on-air premiere in fall 2013. PBS stations across the country will also bring the series to their local communities by providing PEG + CAT educational resources for families.

“We are thrilled to bring PEG + CAT to the PBS KIDS audience this October, not just because it is a smart, funny and engaging series, but also because it meets a critical need for today’s kids,” said Lesli Rotenberg, General Manager, Children’s Programming, PBS. “Over half of our nation’s children are performing below proficient levels in math by the 4th grade, which is why we need to start early to give young children the foundation they need to succeed in this important curricular area. Peg also promises to be a positive role model for girls; this is critical because research shows that kids identify math as being for boys and not for girls as early as second grade.*  With her sense of humor, problem-solving skills and eagerness to collaborate and persevere, Peg will help encourage both boys and girls to explore math.”

PEG + CAT is funded in part by the U.S. Department of Education through the Ready To Learn Initiative, a program that supports the development of innovative educational television and digital media targeted at preschool and early elementary school children and their families, and by the Corporation for Public Broadcasting (CPB). PEG + CAT is the first original preschool transmedia property developed as part of the federal Ready To Learn Initiative.

PEG + CAT is part of PBS KIDS’ ongoing commitment to helping kids build the skills they need to succeed in school and in life. PBS KIDS serves young audiences wherever they live, learn and play — through educational apps, on TV, online and in the classroom.

About CPB
The Corporation for Public Broadcasting (CPB), a private, nonprofit corporation created by Congress in 1967, is the steward of the federal government's investment in public broadcasting. It helps support the operations of more than 1,300 locally owned and  operated public television and radio stations nationwide, and is the largest single source of funding for research, technology and program development for public radio, television and related online services.

About The Ready To Learn Initiative
The Ready To Learn Initiative is a cooperative agreement funded and managed by the U.S. Department of Education’s Office of Innovation and Improvement. It supports the development of innovative educational television and digital media targeted at preschool and early elementary school children and their families. Its goal is to promote early learning and school readiness, with a particular focus on reaching low-income children. In addition to creating television and other media products, the program supports activities intended to promote national distribution and effective educational uses of the programming, community-based outreach and research on educational effectiveness.