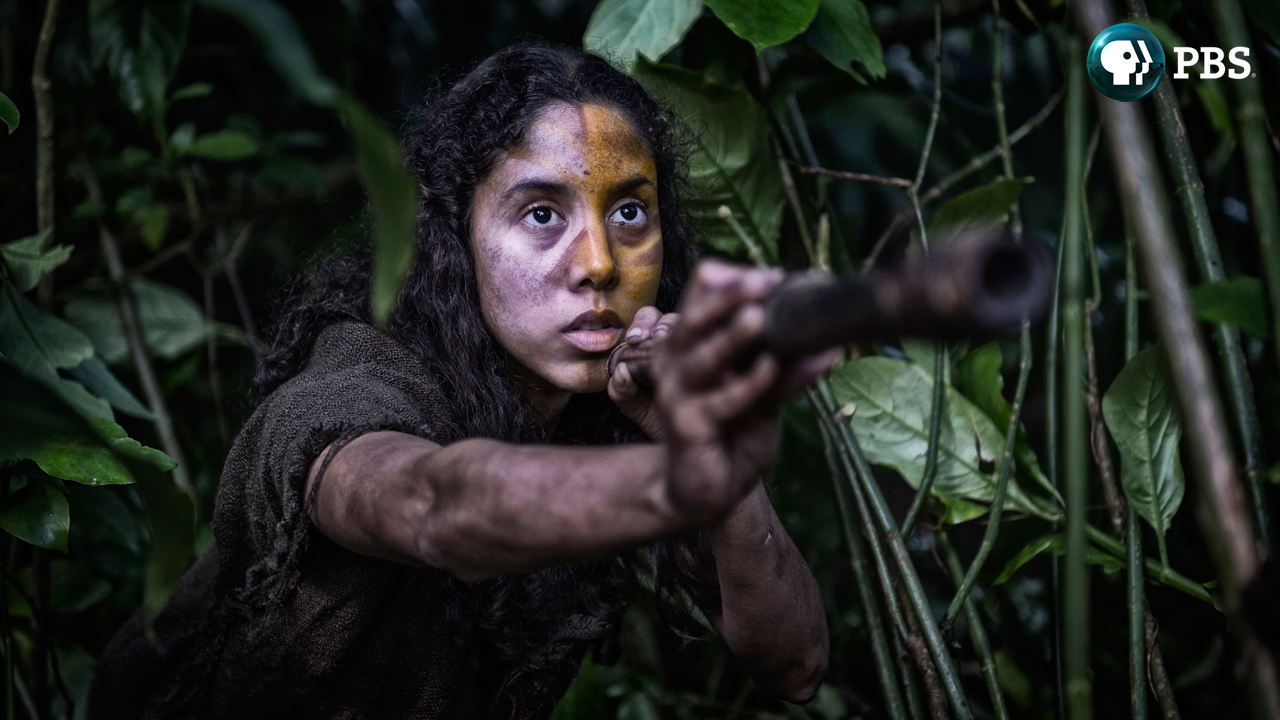 – CALL THE MIDWIFE and VICIOUS Return for New Seasons -

This spring, PBS will premiere FIRST PEOPLES on Wednesday, April 29, at 10:00 p.m. ET, a five-part series that features the latest research exploring how early humans evolved. Highlights of anchor programs in the schedule this season include the broadcast premiere of award-winning filmmaker Rory Kennedy’s LAST DAYS IN VIETNAM, presented by AMERICAN EXPERIENCE, on Tuesday, April 28, at 9:00 p.m. ET and timed to the 40th anniversary of the fall of Saigon (watch a clip here). It is complemented by special programs that link thematically to the film. The stunningly shot EARTH A NEW WILD, hosted by leading conservation scientist Dr. M. Sanjayan, bows Wednesday, February 4, at 9:00 p.m. ET, as part of PBS’ “Think Wednesday” science and nature night (watch a clip here). The fascinating three-part “biographical” film CANCER: THE EMPEROR OF ALL MALADIES — executive produced by Ken Burns and directed and produced by Barak Goodman — premieres Monday, March 30, at 9:00 p.m. ET (watch a clip here). With a focus on offering more new hours of exceptional content and scheduling like-minded shows on the same night, PBS’ strategic placement of programs led to a significant increase in viewership to finish the 2013-2014 broadcast season with the fifth-largest primetime household rating among all broadcast and cable networks.

“Our diverse schedule includes everything from award-wining documentaries to fascinating science shows to ovation-worthy arts performances. More than ever before, I can say that this winter/spring season, there’s something exceptional on PBS every night of the week,” said Beth Hoppe, PBS’ Chief Programming Executive and General Manager of General Audience Programming. “What’s more, the expansion of Sunday night drama gives our audience more of what they are looking for — thrilling, gorgeous, quality storytelling. PBS offers the very best content on television and across digital platforms.”

Returning for Season Four is the critically acclaimed CALL THE MIDWIFE on March 29 at 8:00 p.m. ET. Inspired by the beloved memoirs of nurse Jennifer Worth, the series relates heartwarming stories of the nuns and midwives in London’s Poplar neighborhood. And back this summer is VICIOUS for a second season.

MONDAYS
One of PBS’ most-watched series, ANTIQUES ROADSHOW, is back for its 19th season with a million-dollar find! Premiering on January 5 at 8:00 p.m. ET, ROADSHOW kicks off with its first trip to New York City in 13 years, showcasing an archive of early Boston baseball memorabilia appraised for a record-breaking $1,000,000, the largest sports memorabilia find in the show’s history (watch a clip here). Also on the schedule is INDEPENDENT LENS, offering a new season of original documentaries from some of the best independent filmmakers working today. “Evolution of a Criminal,” executive produced by Spike Lee and airing January 12 at 10:00 p.m. ET, features filmmaker Darius Clark Monroe’s return to the scene of the crime to explore what led him to rob a bank as a teenager in Texas. In A PATH APPEARS, airing in three parts beginning January 26 at 10:00 p.m. ET, Nicholas Kristof, Malin Ackerman, Mia Farrow, Jennifer Garner, Ashley Judd, Blake Lively, Eva Longoria and Alfre Woodard uncover gender oppression and human rights violations in the U.S. and around the world.

PBS will air several programs in late April beginning Monday, April 27 related to the Vietnam War. THE DAY THE 60’s DIED, premiering April 27 at 9:00 p.m. ET, chronicles the nation's upheaval during May 1970, the month in which four students were shot dead at Kent State, and DICK CAVETT’S VIETNAM on April 27 at 10:00 p.m., will feature a look back at the thought-provoking conversations Cavett had about the war with a range of public figures, including Muhammad Ali, Billy Graham and Henry Kissinger.

TUESDAYS
Tuesdays on PBS are steeped in heritage and history as AMERICAN EXPERIENCE presents the broadcast premiere of Rory Kennedy’s documentary LAST DAYS IN VIETNAM on April 28 at 9:00 p.m. ET. The film chronicles the chaotic final days of the Vietnam War and tells the story of an unlikely group of heroes who took matters into their own hands. LAST DAYS IN VIETNAM follows the 8:00 p.m. ET premiere of THE DRAFT, a vivid, contemporary and probing look at the history of the military draft in America, including its turbulent Vietnam War peak and the searing stories of people who lived its realities. LAST DAYS IN VIETNAM and THE DRAFT are part of the PBS’ Stories of Service initiative (watch a clip here).

WEDNESDAYS
PBS’ lineup of great nature, science and technology programming — “Think Wednesday” — returns with “event programs” such as the five-part series EARTH A NEW WILD, hosted by leading conservation scientist Dr. M. Sanjayan, who takes a fresh look at humanity’s relationship to the wild places and fascinating species of our planet. The series premieres February 4 at 9:00 p.m. ET. A Ken Burns-produced adaptation of the best-selling book, CANCER: THE EMPEROR OF ALL MALADIES debuts March 30 at 9:00 p.m. ET. The program traces the disease from its first documented appearance thousands of years ago to the present day, when scientific breakthroughs have put a cure within reach. FIRST PEOPLES premieres April 29 at 10:00 p.m. ET featuring the latest research to uncover how the mixing of human genes in prehistoric times helped us survive and ultimately thrive globally.

Also on Wednesdays this winter, NATURE returns at 8:00 p.m. ET with “Animal House Hunters,” (w.t.) a three-part series that investigates just how animals build their amazing homes, and the intriguing behaviors and social interactions that take place in and around them. “The Nest” explores how birds carefully select their materials, and craft their homes for the all-important task of protecting their eggs and raising their young, April 8. “Location, Location, Location,” on April 15, shows animated blueprints and tiny cameras that chart the building plans and progress of beavers, tortoises, hummingbirds and woodrats, examining layouts and cross sections as they evaluate the technical specs of their structures. “Animal Cities” explores how some animals find that living in the midst of huge colonies of their own kind is sometimes a matter of necessity and sometimes the most secure and rewarding housing arrangement, April 22.

NOVA returns at 9:00 p.m. ET with a new three-part series, BUILDING WONDERS "Mysterious Miracle Building" investigates Istanbul's Hagia Sophia and how this magnificent shrine has survived centuries of earthquakes, February 11; "Petra - Lost City of Stone" explores how a metropolis of tombs and temples was created in the Jordanian desert, February 18; and "Secrets of the Colosseum" features a daring reconstruction of the machinery behind the bloody spectacles staged in Rome's iconic ancient arena, February 25. Another NOVA special, "The Great Math Mystery" poses the riddle of math's extraordinary power to penetrate the secrets of our universe, April 15.

FRIDAYS
PBS’ commitment as America’s home for the best arts on television continues unabated on Fridays. Highlights include Season Two of SHAKESPEARE UNCOVERED, bowing January 30 at 9:00 p.m. ET with celebrity hosts, including “Downton Abbey” star Hugh Bonneville, Christopher Plummer, Morgan Freeman, Kim Cattrall, David Harewood and Joseph Fiennes exploring the Bard’s greatest works. GREAT PERFORMANCES offers audiences several new programs this season, including “La Dolce Vita: The Music of Italian Cinema” on February 27. Josh Groban, Renée Fleming and Joshua Bell perform with the New York Philharmonic, led by music director Alan Gilbert, in selections from film scores by composers like Nino Rota and Ennio Morricone for groundbreaking movie classics by directors such as Frederico Fellini, Franco Zeffirelli and Sergio Leone. Featured films include Amarcord, Once Upon a Time in the West, Cinema Paradiso, Life Is Beautiful and more. AMERICAN MASTERS brings four new shows, including “August Wilson: The Ground on Which I Stand,” February 20 at 9:00 p.m. ET, with film and theater luminaries Viola Davis, Phylicia Rashad, Laurence Fishburne and others sharing stories of the late African-American playwright’s rich theatrical canon; and Ric Burns’ new documentary “American Ballet Theatre at 75” (w.t.), May 22 at 9:00 p.m., which delves into the history of one of the world’s preeminent ballet companies through intimate rehearsal footage, dazzling performances and interviews with past and present stars, including Misty Copeland.

To support the variety of shows debuting in the upcoming Winter/Spring season, PBS LearningMedia will add content to their collection of more than 87,000 resources. Updates include new content in the “Soldiers, Veterans & War in American Life” resource collection to extend AMERICAN EXPERIENCE’s LAST DAYS IN VIETNAM and THE DRAFT into classrooms. PBS LearningMedia will also feature content from EARTH A NEW WILD, CANCER: THE EMPEROR OF ALL MALADIES and THE DAY THE 60’s DIED, among others. For more information on the latest digital resources for classroom instruction, please visit pbslearningmedia.org.