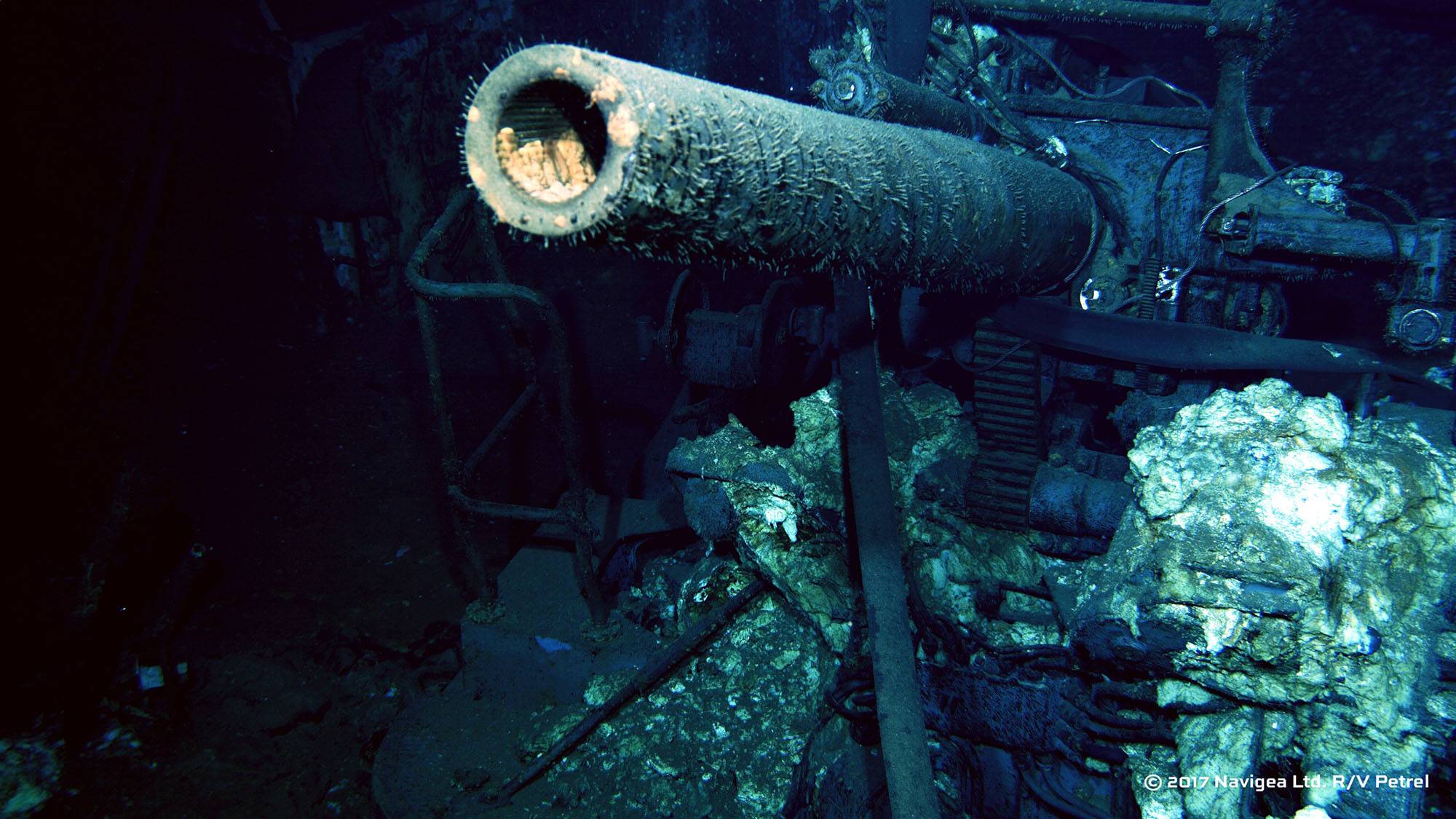 One of the five-inch 25 caliber anti-aircraft gun mounts from the USS Indianapolis. Photo courtesy of Paul G. Allen

− LIVE never before seen video of the decades-old wreckage from three miles below the surface airs Wednesday, September 13, at 10:00 p.m. on PBS stations and digital platforms −

ARLINGTON, VA; September 8, 2017 – PBS will give viewers a live tour of the wreckage from the USS Indianapolis, the World War II vessel that has rested at the bottom of the North Pacific Ocean since its sinking in 1945. Lost for more than 72 years, the U.S. Navy cruiser was found and positively identified in August through careful analysis of wreckage and markings by the expedition crew onboard the Research Vessel (R/V) Petrel, owned by Microsoft co-founder and philanthropist Paul G. Allen. The one-hour live exploration is produced by Vulcan Productions, Inc. and Miles O’Brien Productions, LLC for PBS.  Physical production services provided by Peacock Productions. It premieres on Wednesday, September 13, 10:00-11:00 p.m. ET (check local listings) on PBS member stations, PBS.org, PBS Facebook page, and on PaulAllen.com.

Hosted by Emmy Award-winning broadcast journalist Miles O’Brien from a New York studio, USS INDIANAPOLISLIVE – FROM THE DEEP will allow viewers to see parts of the wreckage of the Fifth Fleet’s naval flagship, which lies more than three miles below the surface of the Philippine Sea. As video and images are transmitted from a state-of-the-art remotely operated vehicle (ROV), Robert Kraft, Vulcan’s director of subsea operations, will provide live narration direct from the R/V Petrel. O’Brien will be joined by experts and scientists, including William Toti, retired U.S. Navy captain and final commanding officer of the Los Angeles class submarine USS Indianapolis (SSN-697) to comment on what viewers are seeing, as well as to discuss the history of the ship, its missions and crew, its sinking and the significance of the expedition.

“To be able to honor the brave men of the USS Indianapolis and their families through the discovery of a ship that played such a significant role during World War II is truly humbling,” Mr. Allen said. “As Americans, we all owe a debt of gratitude to the crew for their courage, persistence and sacrifice in the face of horrendous circumstances. I hope everyone connected to this historic ship will feel some measure of closure at this discovery so long in coming.”

“The fact that the mystery has been solved and the wreckage of the USSIndianapolis has been found after 72 years is amazing,” said Beth Hoppe, Chief Programming Executive and General Manager, General Audience Programming at PBS. “Equally amazing is that the video feed from the ROV will allow PBS viewers to see what the expedition crew sees three miles below on the ocean floor. The use of this technology powerfully connects us to what happened in 1945, allowing us to reflect on the sacrifice of the hundreds of men who lost their lives in the defense of our nation.”

The Indianapolis was lost in the final days of World War II when it was hit by two torpedoes from a Japanese submarine in the early morning hours of July 30, 1945. It sank in 12 minutes, making it impossible to deploy much of its life-saving equipment. Of the 1,196 sailors and Marines onboard, about 300 went down with the ship, and nearly 900 sailors were set adrift. Prior to the attack, the Indianapolis had just completed a secret mission to deliver components of one of the two nuclear weapons that were dropped on Japan. Due to a miscommunication with the ship’s destination port, no one realized the Indianapolis was missing. A patrol eventually happened to spot the survivors and a rescue was undertaken. After spending more than four days in the water amid what is said to be the deadliest sustained shark attack in history, only slightly more than 300 survived. The incident is considered the greatest loss of life at sea from a single ship in U.S. Navy history.

The USS Indianapolis remains the property of the U.S. Navy and its location will remain confidential and restricted by the Navy. The crew of the R/V Petrel has been collaborating with Navy authorities and other experts throughout its search operations and will continue to work on plans to honor the 19 crew members still alive today, as well as the families of all those who served on the highly decorated cruiser. Care will be taken to ensure preservation of this historic site during the live feed on PBS.

USS INDIANAPOLIS LIVE – FROM THE DEEP will re-air on PBS member stations on Sunday, September 17, 7:00 PM, as a lead-in to the premiere of Ken Burns and Lynn Novick’s THE VIETNAM WAR, which begins at 8:00 p.m. ET.


About Paul G. Allen and Vulcan Productions
Paul G. Allen
Four decades after co-founding Microsoft, entrepreneur and philanthropist Paul G. Allen is still exploring the frontiers of technology and human knowledge, and acting to change the future. Mr. Allen is also committed to honoring our past and the lessons it holds, having created public spaces including the Flying Heritage and Combat Armor Collection, MoPOP and the Living Computer Museum + Lab to allowwhere people learn and interact with historic, cultural and musical heritage. The inaugural Seattle Art Fair helped put the city on the map as one of the premier art destinations in the country. His father having served in World War II, Mr. Allen is especially interested in collecting and protecting artifacts that speak to the heroism and service of those who protect our country. His recently acquired Research Vessel “Petrel” provides a platform to search for historic artifacts lost at sea and also helps collect data essential to improving ocean health. To learn more, visit PaulAllen.com.

About Peacock Productions
Peacock Productions, a division of NBC News, is a nonfiction production company that combines the editorial expertise, vast resources and seasoned talent of NBCUniversal to create series, documentaries and special events. Known for its compelling storytelling and versatility, Peacock Productions reaches more than 300 million people worldwide every year across broadcast, cable, syndication, and emerging platforms with its award-winning and highly-rated programming.