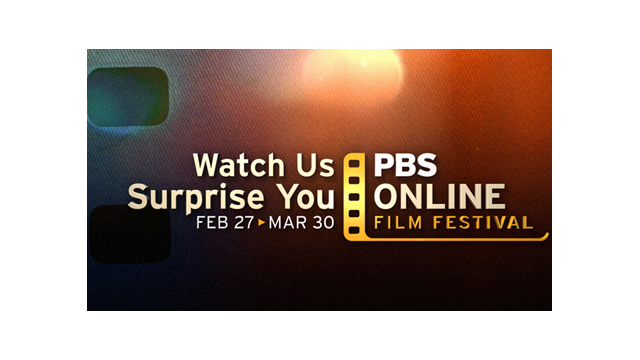 ARLINGTON, VA – February 22, 2012 – PBS today announced that it will launch its first Online Film Festival and showcase of 20 short films from independent filmmakers. The Festival, featuring award-winning films with a wide array of styles, perspectives and subject matter, will run from February 27 through March 30 and can be accessed via the PBS Online Film Festival website and the PBS YouTube channel.

“The theme of the PBS Online Film Festival is ‘Watch Us Surprise You,’ as we think many will be surprised by the depth and breadth of video content that’s available on PBS.org,” said Jason Seiken, Senior Vice President of Interactive, Product Development and Innovation for PBS. “PBS and member stations have always been a home for independent film and we’re excited to launch this first Festival and introduce viewers to these diverse stories and voices.”

A People’s Choice award will be given to the film with the most votes. Visitors can vote for their favorite film by “liking” it either on the Festival’s page on PBS.org or the PBS YouTube channel. The overall winner will receive top placement on the PBS.org homepage, video portal and YouTube page, promotion on PBS’s social media channels and an official badge for their site.

Each Monday, the festival will showcase a new group of short films under a common theme. Those themes and films are:

The Festival will be hosted by filmmakers Patrick Epino and Stephen Dypiangco, co-founders of The National Film Society.  With a uniquely brainy and offbeat style, the National Film Society produces weekly web videos about movies, filmmaking and pop culture. More on the hosts can be found at youtube.com/nationalfilmsociety and facebook.com/nationalfilmsociety.

More information and a preview video for the PBS Online Film Festival can be found at pbs.org/filmfestival. For updates on the Festival, follow #PBSolff on Twitter.

About PBS
PBS, with its nearly 360 member stations, offers all Americans the opportunity to explore new ideas and new worlds through television and online content. Each month, PBS reaches 124 million people through television and 20 million people online, inviting them to experience the worlds of science, history, nature and public affairs; to hear diverse viewpoints; and to take front-row seats to world-class drama and performances. PBS’ broad array of programs has been consistently honored by the industry’s most coveted award competitions. Teachers of children from pre-K through 12th grade turn to PBS for digital content and services that help bring classroom lessons to life. PBS’ premier children’s TV programming and its website, pbskids.org, are parents’ and teachers’ most trusted partners in inspiring and nurturing curiosity and love of learning in children. More information about PBS is available at pbs.org, one of the leading dot-org websites on the Internet, or by following PBS on Twitter, Facebook or through our apps for mobile devices. Specific program information and updates for press are available at pbs.org/pressroom or by following PBS Pressroom on Twitter.