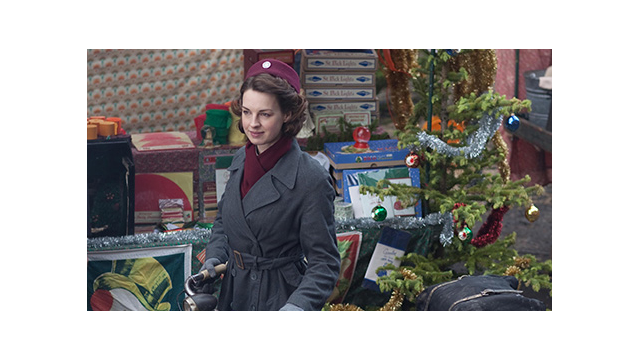 ARLINGTON, VA – October 17, 2013 – PBS will unwrap a special treat for viewers this holiday season with the CALL THE MIDWIFE HOLIDAY SPECIAL. Premiering Sunday, December 29, 2013, at 7:30 p.m. ET, the special will pave the way for a third season of the hit drama CALL THE MIDWIFE, which returns to PBS in spring 2014.

In 1958 East End London, the holidays are not just about the opening of presents, but also about the closing of deep wounds. Although the weather is unseasonably mild for this time of year, the lives of the midwives are anything but calm. Jenny’s relationship with Alec continues to blossom and Shelagh’s (formerly Sister Bernadette) quiet wedding to Dr. Turner is underway. When a thousand-pound explosive is discovered, the district is evacuated and the Nonnatus House team is quick to take charge to ensure that the community is safe and warm. Always one to keep spirits high, Chummy decides to forge ahead with the Cubs Christmas party. However, just when the community’s holiday spirit is renewed, Poplar faces an outbreak of polio, with the repercussions of the illness affecting the nurses and nuns more than they could have ever imagined.

“CALL THE MIDWIFE has established itself as a favorite among PBS viewers, and we are thrilled to offer fans a new episode before the premiere of the third season this spring,” said Beth Hoppe, Chief Programming Executive and General Manager, General Audience Programming, PBS. “We are pleased to continue our partnership with Neal Street, and are excited to see what the holidays have in store for our friends at Nonnatus House.”

For viewers who can’t wait until December for their CALL THE MIDWIFE fix, PBS is also releasing a special short Chummy compilation video showcasing some of the character’s most memorable moments from the first two seasons.

CALL THE MIDWIFE completed its second season run in the U.S. in May 2013. The first series was the biggest new drama on BBC One in more than a decade, and the second season averaged a consolidated viewership of over 10 million in the U.K. Call the Midwife has won accolades across the industry in the UK including 2013 BAFTA Craft awards for director Philippa Lowthorpe and Christine Walmesley-Cotham for Make Up and Hair Design and ‘Best Actress’ for Miranda Hart at the National Television Awards this year. Audiences and critics in the U.S. were equally effusive, with Season 2 scoring 58 percent above the 2012-2013 season-to-date primetime average.

Based on the best-selling memoirs of Jennifer Worth, CALL THE MIDWIFE is a moving and intimate story of midwifery in London’s East End in the 1950s. Season 3 takes viewers back to East London, now in 1959 and the eve of the Swinging Sixties. The winds of change are sweeping through the country and the residents of Nonnatus House face some momentous changes of their own.

Written by Heidi Thomas (“Cranford,” “Upstairs Downstairs”) and directed by a line-up of all female directors including, for the first time, Thea Sharrock (“The Hollow Crown: Henry V”) and Juliet May (“Miranda,” “Scott and Bailey,” “Stella”), CALL THE MIDWIFE is a Neal Street production for BBC and PBS. The series is executive produced by Pippa Harris (Revolutionary Road, “The Hollow Crown”) and Heidi Thomas, and produced by Hugh Warren (“Survivors”).

CALL THE MIDWIFE HOLIDAY SPECIAL will be available for viewing on the PBS Video Portal for 30 days after national broadcast.

About Neal Street Productions
Neal Street Productions was formed in 2003 by Sam Mendes, Pippa Harris and Caro Newling. The company has been successful in film, theatre and television with hit movies including Revolutionary Road, Jarhead and Starter for Ten. Their diverse television slate includes the award-winning “Stuart A Life Backwards,” with Tom Hardy and Benedict Cumberbatch, and the successful, award-winning CALL THE MIDWIFE, which has been a ratings smash hit in the UK. Neal Street also produced the critically acclaimed “The Hollow Crown” — a series of Shakespeare films for the BBC/PBS — starring Ben Whishaw, Tom Hiddleston and Jeremy Irons, which aired on PBS in fall 2013. A new series, “The Flavia de Luce Mysteries,” based on the books by Alan Bradley, is being developed for the BBC. On the theatre side, they have produced The Bridge Project, Shrek the Musical, South Downs & The Browning Version, Enron, Three Days of Rain and a new West End musical of Charlie and the Chocolate Factory, directed by Sam Mendes, which premiered in June 2013.