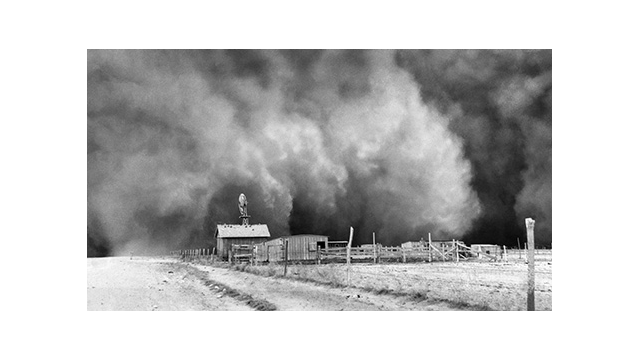 THE DUST BOWL chronicles the environmental catastrophe that, throughout the 1930s, destroyed the farmlands of the Great Plains, turned prairies into deserts and unleashed a pattern of massive, deadly dust storms that for many seemed to herald the end of the world. It was the worst manmade ecological disaster in American history.

“The Dust Bowl was a heartbreaking tragedy in the enormous scale of human suffering it caused. But perhaps the biggest tragedy is that it was preventable,” said Burns. “This was an ecosystem — a grassland — that had evolved over millions of years to adjust to the droughts, high winds and violent weather extremes so common to that part of the country. In the space of a few decades at the start of the 20th century, that grassland was uprooted in the middle of a frenzied wheat boom. When a drought returned, all that exposed soil took to the skies, and people worried that the breadbasket of the nation would become the next Sahara desert. If we show the same neglect to the limits of nature now as we did then, it is entirely possible that this could happen again.”

“PBS' strategy of debuting high-profile shows on our iPad and iPhone apps before television broadcast has proven to be something users really enjoy," said Jason Seiken, Senior Vice President, Interactive, Product Development & Innovation. "Of the more than 150 million videos viewed across all of PBS' web and mobile platforms this September, more than half were viewed on a mobile platform.  This early premiere of the first episode of THE DUST BOWL is part of our ongoing mission to provide outstanding content wherever consumers wish to experience it.”

In addition to the preview prior to the national broadcast, Burns will participate in a virtual town hall at 2:00 p.m. on Wednesday, November 15, 2012.  The national YouTube event, live from WNET’s Lincoln Center studio in New York City, includes Paula Zahn and will be streamed at youtube.com/pbs.

Panelists will discuss current drought conditions, as well as the importance of environmental awareness and the effects humans have on the natural world. Join the conversation at youtube.com/pbs. Submit questions at youtube.com/pbs or #DustBowlPBS.

THE DUST BOWL will be available on DVD and Blu-ray from PBS Distribution: ShopPBS.org; 800-PLAY-PBS, 24 hours a day, 7 days a week.

Funding is provided by Bank of America, Corporation for Public Broadcasting, The Arthur Vining Davis Foundations, Public Broadcasting Service, National Endowment for the Humanities, The Rockefeller Foundation, Wallace Genetic Foundation and members of The Better Angels Society, including the Dana A. Hamel Family Charitable Trust and Robert and Beverly Grappone.

The PBS App is available for free from the App Store on iPhone, iPad and iPod touch or at www.itunes.com/appstore.