PBS to Air LINCOLN@GETTYSBURG on 150th Anniversary of Historic Speech, November 19 at 9:00 p.m. 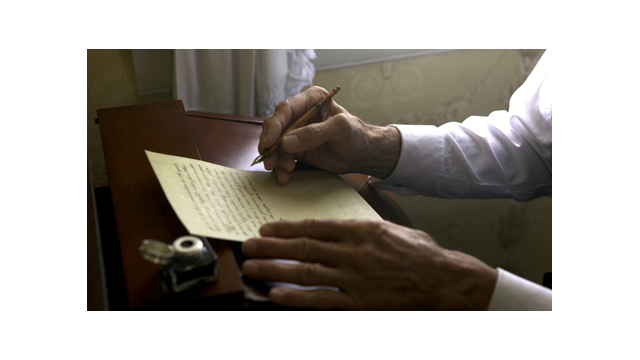 – New special traces Abraham Lincoln’s pioneering use of the telegraph and the words that remade America, the Gettysburg Address –

ARLINGTON, VA; October 8, 2013 — This fall, PBS presents LINCOLN@GETTYSBURG, a special airing on the 150th anniversary of the Gettysburg Address. Premiering Tuesday, November 19, 2013, 9:00-10:00 p.m. ET., the program describes a major turning point in American history: the rebirth of a nation and the dawn of the information age.

In 1863, Abraham Lincoln proved himself a master of a new frontier with his “high-tech” command center — the War Department Telegraph Office, America’s first “Situation Room.” The telegraph, the internet of the 19th century, gave Lincoln the power to re-invent leadership and wield control across distant battlefields and have his finger on the pulse of the nation.  This flow of communication led to some of the most dramatic moments of the Civil War, and shaped the words that Lincoln would use to reunite a shattered country at Gettysburg.

Narrated by David Stratharin (Lincoln, The Bourne Legacy, Good Night, and Good Luck) LINCOLN@GETTYSBURG reveals how Lincoln’s interest in new technologies gave him control never before exercised by any commander-in-chief. “Abraham Lincoln recognized that he who controls the conduit also controls the content,” said Tom Wheeler, author of Mr. Lincoln’s T-Mails. Lincoln used these innovations to connect himself to the country – receiving dispatches by telegraph from his generals in the field – and, in turn, transmitting his words and strategic plans for the nation with more clarity and efficiency than ever before. Throughout the documentary audiences hear a range of views from historians, political scientists and Civil War and military experts; including screenwriter for the award-winning motion picture Lincoln, Tony Kushner; former Secretary of State and Chairman of the Joint Chiefs, Colin Powell; historian and author Eric Foner; author Jeff Shaara; political scientist and TV commentator Melissa Harris-Perry and more.

“Abraham Lincoln is held in high esteem as an American president for so many significant acts of leadership, including the transformative power of his Gettysburg address,” said Beth Hoppe, Chief Programming Executive and General Manager, General Audience Programming, PBS.  “Many viewers may not be aware of Lincoln’s pioneering use of technology to lead the country.  It’s only fitting on the 150th anniversary of this historic speech that we bring this story to light.”

LINCOLN@GETTYSBURG highlights the significance of several elements: the battle and its aftermath; the genesis of America’s new National Cemetery; the last-minute invitation for Lincoln to speak; the president’s daylong “special” train from Washington; the assembly of thousands of spectators from all across the union to the little town in the hills of southern Pennsylvania; and the ceremony itself — crowned by the 272 words with which our 16th president reaffirmed the meaning and purpose of American democracy, and made his case that preserving the union was the only end that could justify the horrors of the war and the slaughter of 10,000 men in the fields and forests surrounding Gettysburg. The address was the opening salvo in a new battle for the fate of the nation.

"Lincoln's powerful and poetic words are still relevant today. One of the most masterfully written addresses of all time, there's a reason why it was the first political speech to go viral. 'Of the people, by the people, for the people…' It doesn't get much better than that," said Peter Schnall, producer and director.

About Partisan Pictures:
Founded by seven-time Emmy-winning producer and cinematographer Peter Schnall, Partisan Pictures is a pioneer in documentary film and television, with a reputation for producing insightful films – true stories distinguished by humanity, intrigue and integrity … and the highest network ratings. Since 1997, Partisan Pictures has been proud to have a world-class team of innovative writers and producers who constantly re-imagine how stories can be brought to life for the most respected non-fiction networks in television, including PBS, History Channel, Discovery and National Geographic Channel. From adventure and intrigue to science and history, Partisan Pictures brings big screen, cinematic technique to the small screen to create a visceral experience that connects audiences with the world.