PBS to Air Ken Burns’s “The Roosevelts: An Intimate History” in 2014 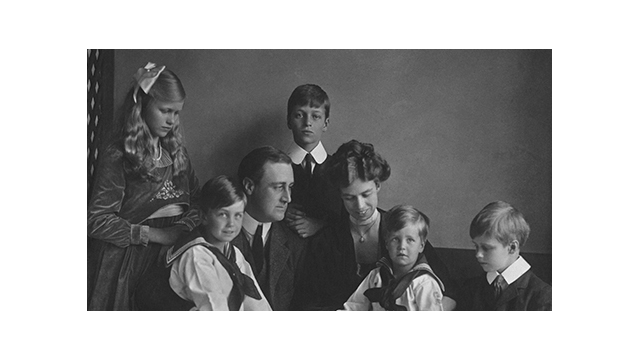 LOS ANGELES, CA -- JULY 21, 2012 -- PBS announced today that THE ROOSEVELTS: AN INTIMATE HISTORY, a new  seven-part, 14-hour documentary by Ken Burns, will air in 2014 on PBS. The film weaves the stories of Theodore, Franklin and Eleanor Roosevelt, three members of one of the most prominent and influential families in American politics. The series marks the first time their individual stories have been woven into a single narrative.    “The Roosevelts have played significant roles in other stories we’ve told before, from the National Parks to World War II,” said Burns. “It’s impossible, in fact, to visit many parts of the American experience without encountering their presence. But beyond simply sharing a bloodline or political success, they each shared a passionate belief that America is at its strongest when everyone has an equal chance. And on a personal level, they each struggled to overcome their own fears while maintaining a public face of courage.”

THE ROOSEVELTS follows the family’s story for more than a century, from Theodore’s birth in 1858 to Eleanor’s death in 1962. Over the course of those years, Theodore would become the 26th president of the United States, and his beloved niece, Eleanor, would marry his fifth cousin, Franklin, who became the 32nd president. Together, they redefined the relationship Americans had with their government and with each other, and redefined, as well, the role of the United States within the wider world. The series encompasses all the history the Roosevelts helped to make — the creation of National Parks and the digging of the Panama Canal, the New Deal and the defeat of Hitler, and the postwar struggles for civil rights at home and human rights around the world in which Eleanor Roosevelt played a central role. But it is also an intimate human story about love and betrayal, family feeling and personal courage and the conquest of fear.

“In THE ROOSEVELTS, Ken delves into these three larger-than-life figures in a way that’s never been done before, exploring not only the characteristics that made them such tremendously influential and strong leaders, but also their interpersonal relationships and human, vulnerable qualities,” said Paula Kerger, president and CEO of PBS. “It’s a wonderful story and we’re very excited to present it to our viewers.”
Legendary actress Meryl Streep portrays Eleanor Roosevelt in readings from her personal letters and writings. Of her performance, Burns said, “As we’ve seen time and time again, Ms. Streep is a magician. Here, she completely transformed herself into Eleanor Roosevelt, simply through her voice. It was remarkable to witness. The entire cast delivers what I consider to be some of the finest voice-over work we’ve ever been fortunate enough to present.”

THE ROOSEVELTS is written by longtime Burns collaborator Geoffrey C. Ward, who is an authority on Franklin Roosevelt. The author of two biographical volumes, A First-Class Temperament and Before the Trumpet, he is also the editor of Closest Companion, which revealed for the first time Roosevelt’s close friendship with his distant cousin, Daisy Suckley. Ward’s interest in FDR grew in part from the fact that he, like FDR, is a polio survivor.

In addition to THE ROOSEVELTS, Burns’s THE DUST BOWL will air on PBS on November 18 and 19, 2012. THE CENTRAL PARK FIVE, which recently premiered at the Cannes Film Festival, will air in 2013 or 2014.

WETA Washington, DC, is the third-largest producing station for public television. WETA’s other productions and co-productions include PBS NEWSHOUR, WASHINGTON WEEK WITH GWEN IFILL AND NATIONAL JOURNAL, THE KENNEDY CENTER MARK TWAIN PRIZE, IN PERFORMANCE AT THE WHITE HOUSE, THE LIBRARY OF CONGRESS GERSHWIN PRIZE FOR POPULAR SONG and documentaries by filmmaker Ken Burns, including THE CIVIL WAR, THE WAR, THE NATIONAL PARKS: AMERICA’S BEST IDEA, THE TENTH INNING and PROHIBITION. More information on WETA and its programs and services is available at www.weta.org.