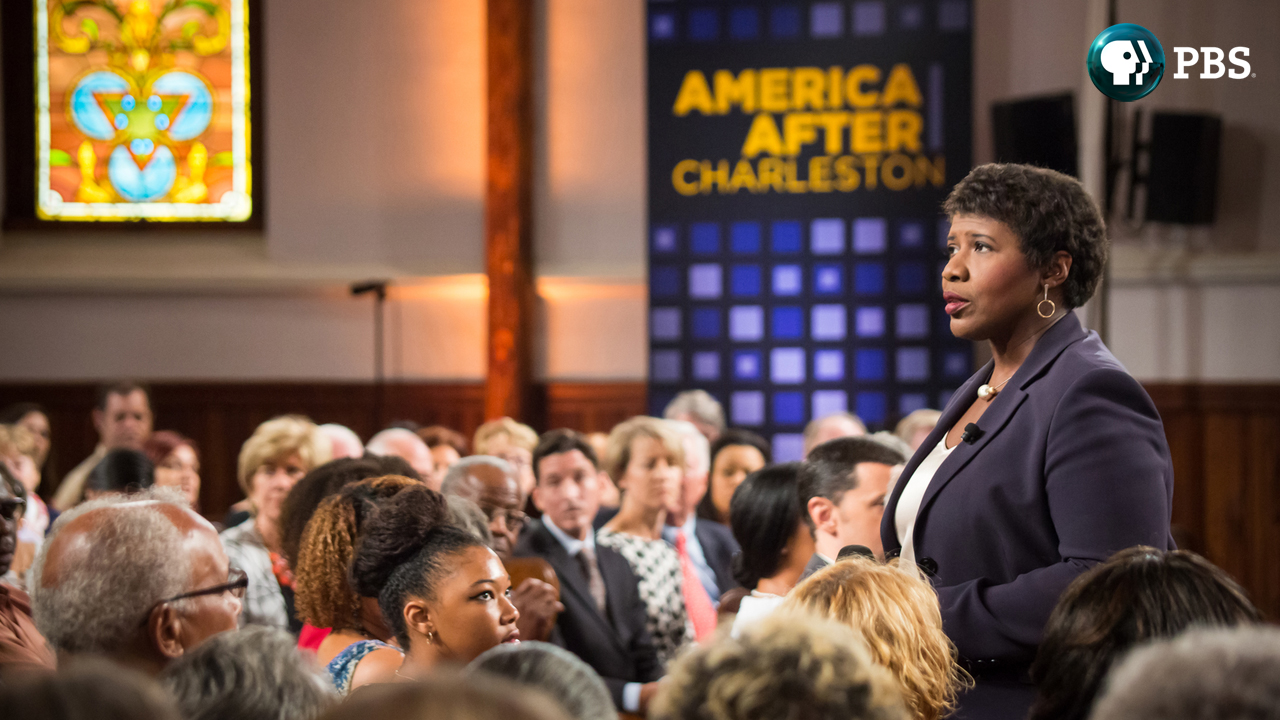 #AfterCharlestonPBS Comments To Be Featured Live On Air,

ARLINGTON, VA; September 21, 2015 – PBS today announced additional details for its special broadcast, AMERICA AFTER CHARLESTON, a one-hour town hall meeting that explores the many issues propelled into public discourse after a white gunman shot and killed nine African-American parishioners in Charleston’s Emanuel African Methodist Episcopal Church in June 2015. Gwen Ifill, PBS NEWSHOUR co-anchor and managing editor, and moderator and managing editor of WASHINGTON WEEK, moderates the program, which was taped on September 19 at the Circular Congregational Church, just blocks from the site of the shootings, before a live audience of more than 250 community members. AMERICA AFTER CHARLESTON, produced for PBS by WETA Washington, DC, WGBH Boston and South Carolina ETV Network, with funds provided by PBS and the Corporation for Public Broadcasting, premieres Monday, September 21, 2015, 9:00-10:00 p.m. ET on PBS (check local listings).

Polly Sheppard, one of the only two adult survivors of the Emanuel AME shooting, spoke at the town hall. Through conversations with the families of the victims, Charleston civic leaders and commentators from across the country, this special brings together a diverse range of voices to engage in constructive conversation about the issues of race, structural inequality and politics raised by the events in South Carolina. Panelists include Rev. Dr. Norvel Goff, Interim Pastor, Emanuel AME Church in Charleston; Cornell Brooks,President and CEO, National Association for the Advancement of Colored People (NAACP); Rep. Jenny Horne, R-Summerville, South Carolina House of Representatives; Alexia Fernandez Campbell, Staff Correspondent, National Journal; and Arielle Newton, Black Lives Matter NYC & Founder and Editor-in-Chief, Black Millennial.

AMERICA AFTER CHARLESTON is a multi-platform initiative with diverse digital and social media integration. Perspectives shared on social media before the taping were incorporated into the town hall conversation, and during the September 21 broadcast, viewers will turn to social media to become part of the conversation unfolding onscreen. The discussion will revolve around the hashtag #AfterCharlestonPBS, and select tweets and Facebook comments will be featured live on air. WGBH will be leading the national conversation from its studio in Boston, convening both local and national productions such as Frontline, Basic Black, World Channel, and PRI’s The World. Participants will live tweet the show, adding context and mining for new perspectives on social media. Join the live conversation by using the hashtag #AfterCharlestonPBS on Facebook and Twitter throughout the hour. The AMERICA AFTER CHARLESTON website, pbs.org/aftercharleston, will include exclusive videos, visualizations and infographics, and put the social media conversation front and center, aggregating the best comments, perspectives and additional pieces of context around the issues of race, identity and politics.

“I grew up as the child of an African Methodist Episcopal minister, so the murders at the Charleston church hit home for me,” said Ifill. “But this latest example of America’s unsettled racial climate does not stand alone. We are returning to Charleston to continue the conversation we began in Ferguson last year, and which has resonated in Baltimore, Cincinnati and Waller County, Texas, since.”

PBS LearningMedia, an online library with thousands of digital resources for K-12 teachers and students, will make digital assets from the show available to teachers and students. The additional material will complement a wide range of other content addressing gun violence and racism from other PBS programs such as Not in Our Town, A Path to Violence, After Newtown and U.S. Gun Homicides: Visualizing the Numbers.

WETA Washington, DC, is one of the largest-producing stations of new content for public television and serves Virginia, Maryland and the District of Columbia with educational initiatives and with high-quality programming on four digital television channels. Other WETA productions and co-productions include PBS NEWSHOUR, WASHINGTON WEEK WITH GWEN IFILL, THE KENNEDY CENTER MARK TWAIN PRIZE and documentaries by filmmaker Ken Burns, including THE ROOSEVELTS: AN INTIMATE HISTORY and a forthcoming film on Jackie Robinson. Sharon Percy Rockefeller is president and CEO of WETA. More information on WETA and its programs and services is available at www.weta.org.

About WGBH
WGBH Boston is one of America’s preeminent public broadcasters and producer of PBS content for TV and the Web, including FRONTLINE, NOVA, AMERICAN EXPERIENCE, MASTERPIECE, ANTIQUES ROADSHOW, ARTHUR, CURIOUS GEORGE and other primetime, lifestyle and children’s series. WGBH is a major supplier of public radio programming and oversees Public Radio International (PRI). A leader in educational multimedia for the classroom, WGBH supplies content to PBS LearningMedia, a national service for teachers and students. WGBH also is a pioneer in technologies and services that make media accessible. More info at www.wgbh.org.

Video and audio excerpts from AMERICA AFTER CHARLESTON are available upon request.