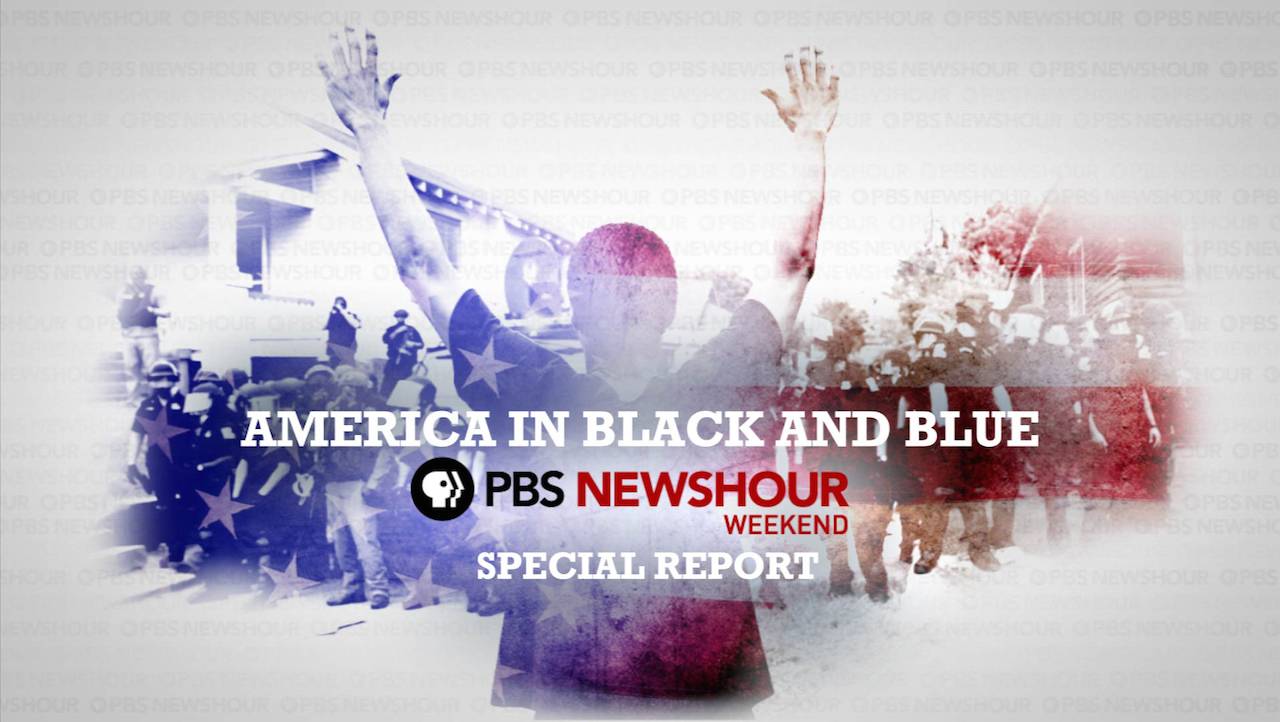 ARLINGTON, VA; July 15, 2016 -- In response to recent events that have heightened racial tensions in the U.S., PBS presents AMERICA IN BLACK & BLUE: A PBS NEWSHOUR WEEKEND SPECIAL, a one-hour newsmagazine special report on Friday, July 15 at 9:00 p.m. EST (check local listings). AMERICA IN BLACK & BLUE looks at the tensions between America’s diverse communities and their local police forces, the efforts in many communities to find common ground and healing, and the delicate balance between essential law enforcement and protecting the civil and human rights of all Americans. The special preempts previously scheduled programming.

After a week of violence, grief and horror, including the fatal shootings of two African American men by police officers in Minnesota and Louisiana, and five police officers killed in Dallas, AMERICA IN BLACK & BLUE will trace the roots of these events, explore the often competing accounts of responsibility and justice, and help to facilitate the conversation that Americans are having across the country about loss, fear, and whether progress on these issues can be made.

Produced by WNET, AMERICA IN BLACK & BLUE will be hosted by journalist Alison Stewart, with reporting from PBS NEWSHOUR WEEKEND anchor Hari Sreenivasan, and special correspondents Chris Bury and Michael Hill. The broadcast draws on recent and upcoming PBS content, including FRONTLINE’s “Policing the Police,” the Gwen Ifill special “America After Ferguson” and the forthcoming PBS documentary “The Talk (w.t.),” about the conversation many African-American and Latino parents find necessary to have with their children about interacting with police. Broderick Johnson, assistant to the President, current White House Cabinet Secretary, and Chair of the My Brother’s Keeper Task Force, will be interviewed from the White House by Stewart.

“This program is the result of award-winning PBS news, public affairs and documentary reporters and producers working collaboratively with our own PBS NEWSHOUR WEEKEND team to acknowledge and advance the unfolding discourse about race and rights in our society today,” said Stephen Segaller, Vice President of Programming for WNET. “We will be shedding light on important issues, and hearing about the common ground in our country, with some remarkable original reporting and informed discussion.”

A 20-second promotional video for AMERICA IN BLACK & BLUE is available here:

AMERICA IN BLACK & BLUE will be available for streaming on PBS and station digital platforms including PBS.org and the PBS app on iOS, Android, AppleTV, Roku and FireTV devices.

PBS, with 350 member stations, offers all Americans the opportunity to explore new ideas and new worlds through television and online content. Each month, PBS reaches nearly 100 million people through television and nearly 33 million people online, inviting them to experience the worlds of science, history, nature and public affairs; to hear diverse viewpoints; and to take front row seats to world-class drama and performances. PBS’ broad array of programs has been consistently honored by the industry’s most coveted award competitions. Teachers of children from pre-K through 12th grade turn to PBS for digital content and services that help bring classroom lessons to life. PBS’ premier children’s TV programming and its website, pbskids.org, are parents’ and teachers’ most trusted partners in inspiring and nurturing curiosity and love of learning in children. More information about PBS is available at www.pbs.org, one of the leading dot-org websites on the Internet, or by following PBS on Twitter, Facebook or through our apps for mobile devices. Specific program information and updates for press are available at pbs.org/pressroom or by following PBS Pressroom on Twitter.