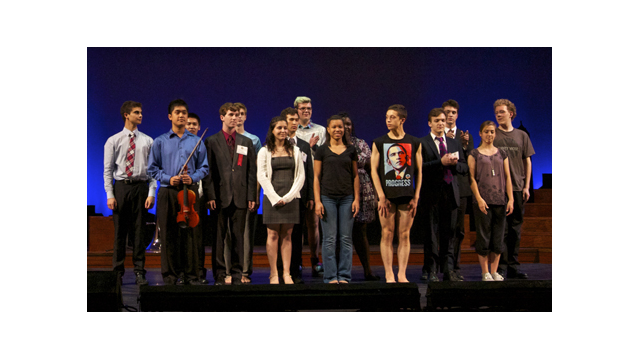 WASHINGTON, DC; June 15, 2012-- PBS today announced it will partner with YoungArts to live stream A Salute to the 2012 U.S. Presidential Scholars, a performance by the 2012 U.S. Presidential Scholars in the Arts with special guests Herbie Hancock and U.S. Secretary of Education Arne Duncan, at the John F. Kennedy Center for the Performing Arts on Monday, June 18 at 8 p.m. EST.

Nominated through YoungArts, the U.S. Presidential Scholars in the Arts are being honored as the top high-school artists in the nation with superior academic and artistic achievement, leadership and character.  Their performances will be streamed live on PBS’ Facebook page and YoungArts’ website.

“We are so honored that PBS has partnered with us again to live stream the performance by the U.S. Presidential Scholars in the Arts,” says Paul T. Lehr, YoungArts’ Executive Director.  “We are proud of our ongoing collaboration with PBS. This level of recognition and exposure is an important element of our mission to foster and develop the careers of America’s young artists and to generate support and interest in the arts across the nation.”

“We are proud to again provide a platform to showcase the U.S. Presidential Scholars in the Arts,” added PBS President and CEO Paula Kerger. “Part of our mission is to provide the world’s largest stage for the arts, and by bringing the work of YoungArts to a broader audience, we hope we can extend the impact of this important program.  This is especially important at a time when arts funding is facing dramatic cuts.”

Each year the U.S. Presidential Scholars in the Arts are drawn from a pool of talented high school students across the nation who apply to the YoungArts program. Following a rigorous adjudication process, and participation in the program, YoungArts then nominates 60 finalists for consideration by the White House Commission on Presidential Scholars.  The 2012 winners, including 20 graduating high school seniors who are talented singers, dancers, musicians, writers, filmmakers, and theater/spoken-word performers, were named earlier this year by U.S. Secretary of Education Arne Duncan.

In addition to A Salute to the 2012 U.S. Presidential Scholars, the work of the visual artists and writers will be on view in a special exhibition, An Exhibition of Works, at the Smithsonian American Art Museum from June 17 to July 4, 2012.

As part of PBS’ commitment to arts and performance programming, this live-streamed event gives all Americans an early glimpse, from a front-row seat, at the country’s next generation of talent.  This summer, PBS launches its PBS Arts Summer Festival (beginning June 29 at 9 p.m.). In addition, PBSArts.org will feature exclusive online programs and exhibitions that extend PBS’ broadcast content, giving viewers a chance to learn more about featured artists and discover new ones.

About YoungArts YoungArts is the core program of the National Foundation for Advancement in the Arts (NFAA) and the signature national program that that recognizes and supports America’s most talented young artists in the visual, literary and performing arts. The organization’s mission is to identify emerging artists, provide educational enrichment and assistance in their pursuit of the arts, and to raise the appreciation for and support of the arts in American society. Dedicated to inspiring and nurturing young artists, YoungArts was founded in 1981 by businessman and visionary, the late Ted Arison, and his wife Lin. The program identifies the next generation of emerging artists and contributes to the cultural vitality of the nation by investing in the artistic development of thousands of gifted artists in nine disciplines in the visual, literary and performing arts. At the request of The Commission on Presidential Scholars, which is appointed by the President of the United States, YoungArts is the exclusive path to the U.S. Presidential Scholars in the Arts.