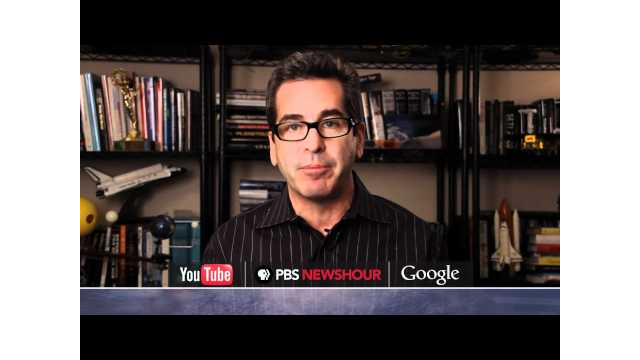 Project is a collaboration of PBS NEWSHOUR, Google and YouTube

(Wednesday, April 27, 2011) Google, YouTube and the PBS NEWSHOUR are pleased to announce that they are teaming up to offer the public a once-in-a-lifetime opportunity to go aboard the space shuttle Endeavour on its final mission and ask questions to the crew.

The exclusive live interview comes as NASA’s Shuttle program is coming to a close. Miles O’Brien has extensive experience covering the space program and has attended nearly 40 space launches. His coverage of the space program, including the final launch of the space shuttle Discovery, is available on the PBS NEWSHOUR Science Page.

To submit video or text questions for the astronauts, the public can choose one of several options, including: following a link at the PBS NEWSHOUR website, clicking “submit a question” on the PBS NewsHour YouTube Channel, or by sending a message via Twitter that includes the hashtag #utalk2nasa.

The public will also have an opportunity to vote for the best questions (a retweet counts as a vote for a Twitter message.)  The questions posed to the astronauts will be selected from the top vote getters.

The deadline for question submissions is 11:59 p.m. Saturday, April 30.  Video questions should be less than 60 seconds.  All videos should include the questioner’s name and location.

Check the NewsHour’s website for more details and live coverage of Endeavour’s final launch – scheduled for 3:47 p.m. ET on Friday.

*Since the interview is tied to the schedule of the space shuttle, the time and date of the interview are subject to change as weather and technical problems could delay the launch or the interview.

The interview marks the second time PBS NEWSHOUR has teamed up with Google and You Tube to offer the public direct access to top newsmakers.  During the height of the Gulf oil spill crisis, in  “America Speaks to BP” the public was taken inside BP’s Houston headquarters and given the opportunity to ask Bob Dudley, the BP executive in charge of the clean up, their questions about the spill and to offer their suggestions for cleaning up the oil in an exclusive hour long interview moderated by NEWSHOUR senior correspondent Ray Suarez.

PBS NEWSHOUR is seen five nights a week on more than 315 PBS stations across the country and is also available online, via public radio in select markets and via podcast. The program is produced by MacNeil/Lehrer Productions, in association with WETA Washington, DC, and THIRTEEN in New York. Major corporate funding for The NewsHour is provided by Chevron and Intel, with additional support from the William & Flora Hewlett Foundation, the Corporation for Public Broadcasting and public television viewers.