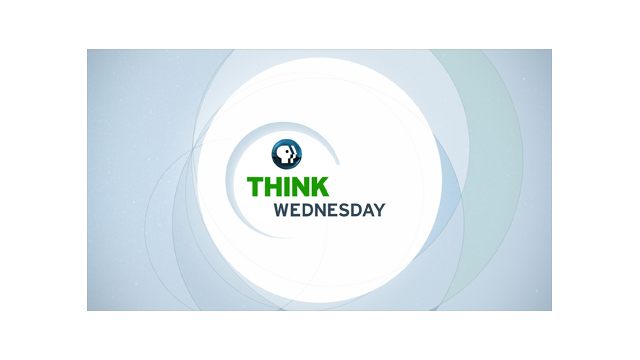 PASADENA, CA; January 20, 2014 – At the semi-annual Television Critics Association conference today, PBS announced the launch of its new “Think Wednesday” primetime line-up: television’s best nature, science and technology programming, including new episodes of acclaimed series NATURE and NOVA in the 8 p.m. and 9 p.m. hours respectively, and new specials debuting at 10 p.m. The “Think Wednesday” lineup premieres Wednesday, April 9, with new episodes of NOVA and NATURE and the premiere of YOUR INNER FISH at 10 p.m.

“PBS has always offered a wide range of programming that speaks to individuals with a variety of interests. This spring, PBS has a Wednesday night lineup that will keep viewers coming back week after week to find smart, fascinating content they love,” said Beth Hoppe, Chief Programming Executive and General Manager of General Audience Programming. “PBS Wednesday is the destination for the best science and nature programs, offering new perspectives on life in the universe feeding viewers’ curiosity and sure to be leaving them wanting more.”

“Think Wednesday” launches at 8 p.m. on April 9 with PBS’ long-running series NATURE, the highest-rated nature series on television, presenting the best in original, natural history filmmaking. New episodes highlight animal prosthetics, Japanese snow monkeys and wild mule deer. At 9 p.m., NOVA, the highest-rated science series on television and the most-watched documentary series on public television, premieres the three-part “Inside Animal Minds,” which explores breakthroughs in the revolutionary science of animal cognition, focusing on three iconic creatures — birds, dogs and dolphins. At 10 p.m., the new three-part series YOUR INNER FISH premieres, completing a strong line-up of captivating programming. Produced by Tangled Bank Studios in collaboration with the award-winning production company Windfall Films, YOUR INNER FISH delves deeply into the past and reveals a startling truth: Hidden within the human body is a story of life on Earth. Based on the best-selling book by paleobiologist Neil Shubin, this scientific adventure story whisks viewers from Ethiopia to the Arctic Circle on a hunt for the many ways our animal ancestors have shaped our anatomical destiny.

“My Bionic Pet”  – Wednesday, April 9, 8:00-9:00 p.m. ET
Left without fins, flippers, beaks or tails from disease, accidents or human cruelty, some animals face seemingly insurmountable obstacles to survive. Prosthetic parts made possible by the latest engineering and technology can provide what disabled animals need, and scientists are finding that innovations created in the process can benefit humans as well.

“Touching the Wild” – Wednesday, April 16, 8:00-9:00 p.m. ET
Joe Hutto (“My Life as a Turkey”) dedicated seven years of his life to infiltrating a wild mule deer community. Incredibly, these keenly intelligent animals, that would normally run from a human, come to regard this stranger as one of their own. The joy Hutto feels for his new family is heartwarming, even when experiencing their world as prey.

“Snow Monkeys” (w.t.) – Wednesday, April 23, 8:00-9:00 p.m. ET
The Japanese macaque, or snow monkey, is the northernmost monkey species in the world, able to survive winter temperatures below 15 degrees Fahrenheit. It’s also among the most intelligent: recent studies found that macaques can develop different accents, like humans. And it’s the only animal other than humans and raccoons known to wash its food before eating it.

NOVA “Inside Animal Minds”– Wednesdays, April 9-23, 2014, 9:00-10:00 p.m. ET
All humans have gazed into another creature’s eyes and wondered: What is it thinking? What does it know? Now, the revolutionary science of animal cognition reveals hard evidence about how animals understand the world around them — uncovering their remarkable problem-solving abilities and exploring the complexity of their communications and their emotions.

“Bird Genius” − Wednesday, April 9, 9:00-10:00 p.m. ET
When it comes to intelligence, we humans are clearly the most gifted animals around. But what make us so special? Our ability to make and use tools? To solve complex problems? Or plan for the future? Today, researchers are discovering other creatures that have mastered these skills. NOVA tests the limits of some of the planet’s brainiest birds, searching for the secrets of a problem-solving mind.

“Dogs & Super Senses” − Wednesday, April 16, 9:00-10:00 p.m. ET
What is it like to be a dog, a shark or a bird? This question is getting serious attention from scientists who study animal senses. How does a swallow’s tiny, one-gram brain take in the flood of visual information that enables the bird to whiz within inches of buildings while flying at 40 miles an hour? Is it possible for a dog to smell time? How has the evolution of the dog – from its wolf ancestors – reshaped its brain?  NOVA goes into the minds of animals to “see” the world in an entirely new way.

“Who’s the Smartest?” − Wednesday, April 23, 9:00-10:00 p.m. ET
What makes an animal smart?  What forces of evolution drive brains to become more complex?  Many scientists believe the secret lies in our relationships.   Throughout the animal kingdom, some of the cleverest creatures – including humans -- seem to be those who live in complex social groups, like dolphins, elephants, and apes. Could the skills required to keep track of friend and foe make animals smarter? To find out, NOVA goes inside the social lives of some of the smartest animals on the planet.

YOUR INNER FISH − Wednesdays, April 9-23, 2014, 10:00-11:00 p.m. ET
How did the human body become the complicated, quirky and amazing machine it is today? This cutting-edge science adventure series reveals a startling truth: hidden within the human body is the story of life on Earth, and the legacy of creatures that lived hundreds of millions of years ago. Based on the best-selling book by Neil Shubin, who also hosts the series, YOUR INNER FISH travels from Africa to the Arctic to uncover a 3.5-billion-year history of the human body and the cast of ancient characters that made us who we are today.

“Your Inner Fish” – Wednesday, April 9, 10:00p.m. – 11:00p.m. ET
Our arms, legs, necks and lungs were bequeathed to us by a fish that lumbered onto land some 375 million years ago. The genetic legacy of this creature can be seen today in our own DNA, including the genes used to build the quintessentially human feature, our hands.

“Your Inner Reptile” – Wednesday, April 16, 10:00p.m. – 11:00p.m. ET
Key events in our evolutionary saga began about 250 million years ago, when ferocious, reptile-like animals that roamed the Earth started the process of evolving into shrew-like mammals. Our reptilian ancestors left their mark on many parts of the human body, including our skin, teeth and ears.

“Your Inner Monkey” – Wednesday, April 23, 10:00p.m. – 11:00p.m. ET
Our primate progenitors had bodies a lot like those of modern monkeys and spent tens of millions of years living in trees. From them we inherited our versatile hands, amazing vision and capable brains — but also some less beneficial traits, including our bad backs and terrible sense of smell.