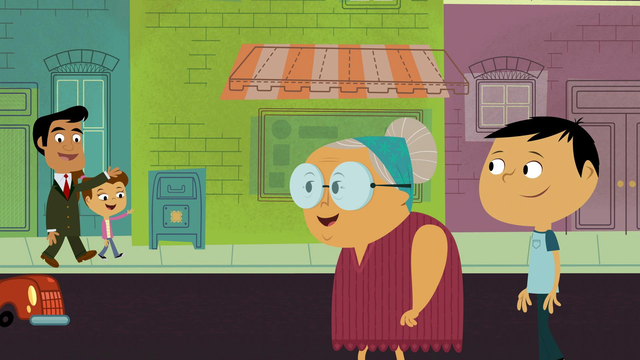 CHUCK VANDERCHUCK’S “SOMETHING SOMETHING” EXPLOSION engages children in a variety of musical genres while also stimulating creativity. NOAH COMPRENDE introduces children to the Spanish language through animated videos with embedded games.  Both properties are designed for children ages 6-9 years old and will roll out new webisodes monthly on PBSKIDSGO.org. Each webisode integrates original games and activities into the narrative, allowing kids to interact with the characters. CHUCK VANDERCHUCK’S “SOMETHING SOMETHING” EXPLOSION and NOAH COMPRENDE are both funded by the Corporation for Public Broadcasting (CPB).

“Chuck and Noah are lovable characters that will take kids on interactive, virtual learning adventures,” said Lesli Rotenberg, Senior Vice President, Children’s Media, PBS.  “These new web-originals will give children the opportunity to explore music, covering genres ranging from salsa to rock, and the Spanish language, including vocabulary words like manzana and leche, through engaging games and video.”

CHUCK VANDERCHUCK’S “SOMETHING SOMETHING” EXPLOSION, produced by Scholastic Media and Soup2Nuts, is an interactive online web series  aimed at  helping kids understand music and music composition through online episodes and integrated games and activities on the web.  In each webisode, kids get to be a member of the band, interacting with Chuck, the lead singer and main creative force behind the band who dreams BIG, and Ramona, Chuck’s band mate who helps make his big ideas into reality.  Chuck and Ramona present five different musical genres:  Salsa, Jazz, Rock, Country, and Reggae.  Children will learn about different instruments used for each musical style, and play games through which they will have the chance to identify instruments, write lyrics, compose melodies, create costumes, and play in a virtual concert with Chuck and Ramona.  The site contains additional content such as videos, printable posters, MP3’s, maps and facts that allow children to further explore each genre.  Specific areas explored include basic rhythmic and melodic patterns, as well as geography and cultural lessons related to music genres.   NOAH COMPRENDE, a production of THIRTEEN for WNET, is a web-original series about a 9-year-old boy visiting his grandmother in a community where no one speaks English.  Noah is trying to learn Spanish, but sometimes gets it wrong. In each animated video, a misunderstanding launches a comic adventure for Noah and his pet mouse Pequeño.  With Pequeño’s help, Noah always manages to solve the problems he’s created, learning Spanish in the process.  Although kids – like Noah –may not understand the Spanish dialogue, they can comprehend the story told through rich visual storytelling.  Each video features opportunities for kids to roll their cursor over objects on the screen to hear the Spanish translation. Three different vocabulary-driven, arcade-style games also reinforce learning, as leveling and racing against the clock encourage multiple plays and repeated exposure to vocabulary.  Another game, “How Do You Say…?,” helps kids learn common expressions in Spanish, such as greetings and phrases to say in a restaurant. Focused on Spanish language acquisition, NOAH COMPRENDE is based on the educational concept that kids learn language most effectively when they can put it into meaningful context.

Images and other press materials for CHUCK VANDERCHUCK’S “SOMETHING SOMETHING” EXPLOSION are available here: http://pressroom.pbs.org/Children-Media/PBS-Kids-GO/CHUCK-VANDERCHUCK.aspx.

Images and other press materials for NOAH COMPRENDE are available here: http://pressroom.pbs.org/Children-Media/PBS-Kids-GO/NOAH-COMPRENDE.aspx.

Scholastic Corporation (NASDAQ: SCHL) is the world’s largest publisher and distributor of children’s books and a leader in educational technology and related services and children’s media. Scholastic creates quality books, print and technology-based learning materials and programs, magazines, multi-media and other products that help children learn both at school and at home. The Company distributes its products and services worldwide through a variety of channels, including school-based book clubs and book fairs, retail stores, schools, libraries, on-air, and online at www.scholastic.com.

Soup2Nuts, a division of Scholastic Media, is a digital animation studio offering full inhouse production services including the development of original series, writing, recording, music composing, character design, animation and post-production. Founded in 1994, the Boston based studio quickly established a reputation for creating award winning animated comedy series with their first hit, “Dr. Katz: Professional Therapist,” which aired on Comedy Central.  Since then, the studio has created the cult favorite “Home Movies®” for Cartoon Network’s Adult Swim, the science series “Squigglevision” for ABC’s Saturday morning, “Hey Monie” for BET and Oxygen, the teen comedy “O’Grady” for The N and currently – WordGirl® for PBS KIDS GO!

WNET New York  Public Media is a pioneering provider of television and web content.  The parent of THIRTEEN, WLIW21 and Creative News Group, WNET brings such acclaimed broadcast series and websites as Tavis Smiley, Need To Know, Nature, Great Performances, American Masters, Charlie Rose, Secrets of the Dead, Religion & Ethics Newsweekly, Visions, Consuelo Mack WealthTrack, Angelina Ballerina: The Next Steps and Cyberchase to national and international audiences. Through its wide range of channels and platforms, WNET serves the entire New York City metro area with unique local productions, broadcasts and innovative educational and cultural projects. In all that it does, WNET pursues a single, overarching goal — to create media experiences of lasting significance for New York, America and the world. For more information, visit www.wnet.org.