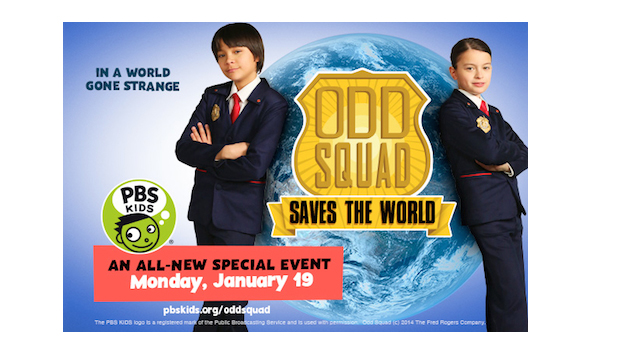 Arlington, VA, December 18, 2014 – On Monday, January 19,PBS KIDS will premiere a one-hour special from its newest media property,ODD SQUAD, a live-action series designed to help kids 5-8 build math and collaboration skills. In “Odd Squad Saves the World,” kid agents tackle high-stakes cases and work together to overcome obstacles and save the day. Clips and full segments from “Odd Squad Saves the World” will also be available on pbskids.org, the PBS KIDS Video App and PBS KIDS on Roku, Apple TV, Chromecast and Amazon Fire. New episodes from the series will also premiere throughout the week of January 19.

ODD SQUAD focuses on two young agents, Olive and Otto, who are part of Odd Squad, an agency whose mission is to investigate unusual occurrences. A math concept is embedded in each of their cases, as Olive and Otto work together to problem-solve and set things right. ODD SQUAD premiered on PBS KIDS in November 2014 and airs weekdays on PBS stations (check local listings).

“ODD SQUAD has already become a family favorite, with more than 58million video streams on digital platforms to date,” said Lesli Rotenberg, General Manager, Children’s Media, PBS. “In this new special, Olive and Otto are tasked with their biggest case yet, offering viewers an action-packed adventure that will keep them engaged with ODD SQUAD’s signature humor while helping them learn key skills, including collaboration and perseverance.”

The ODD SQUAD website, pbskids.org/oddsquad, offers a variety of engaging games, activities and videos for kids, as well as parent and caregiver resources. New games and activities will be released to coincide with the “Odd Squad Saves the World” broadcast premiere. Children can also sign up to become Odd Squad agents online and earn rewards as they play math games inspired by the series.

Rise of the Hydraclops: In order to save the world, Olive and Otto must locate a treasure chest that Oscar buried.

Dance Like Nobody's Watching: When the alarm system at Headquarters is triggered, Olive, Otto, Ms. O and Oscar must avoid a series of booby traps in order to shut it off.

Recipe for Disaster: Olive and Otto explain to Ms. O how a case went wrong, each in their own way.

O Is Not for Old: The agents throw a surprise party for Ms. O.

The following new episodes also premiere throughout the week of January 19: