PBS KIDS Takes 3 to 6-year olds on an Alphabet Adventure with new Super Why! App for iPhone, iPad and iPod Touch 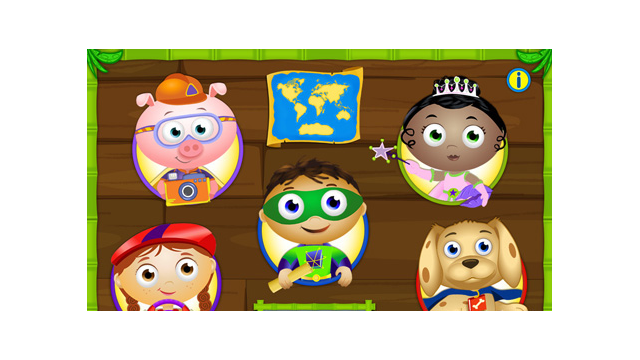 ARLINGTON, VA, August 16, 2012 – PBS KIDS has released its newest educational app, SUPER WHY! ABC Adventures: Alphabet for iPhone, iPad and iPod touch. Designed for kids ages 3 to 6, the new app, now available in the App Store, is the fourth app based on SUPER WHY!, the award-winning hit preschool series from Out of the Blue Enterprises, which helps kids build critical literacy skills through storybook adventures. SUPER WHY! ABC Adventures: Alphabet builds on PBS KIDS’ existing SUPER WHY! app collection, with a comprehensive curriculum featuring over 400 words and opportunities to practice recognizing sounds and upper- and lowercase letters.

“At PBS KIDS, our mission is to offer all children learning opportunities on-air, online and on the go,” said Lesli Rotenberg, Senior Vice President, Children’s Media, PBS. “SUPER WHY! ABC Adventures: Alphabet is a great tool for families to use to build reading skills wherever they are – covering core areas such as the alphabet and letter sounds that will help prepare children for success in school.”   In this new app, kids join their favorite SUPER WHY! characters for an around-the-world alphabet adventure, all while playing a comprehensive and engaging collection of five mini-games.

“PBS’ mobile audience is continually growing; in June, more than 74 million PBS KIDS videos were streamed on mobile, accounting for over half of PBS KIDS’ total streams for the month.*  And PBS has been a leader in the children’s mobile space with SUPER WHY! in particular,” said Jason Seiken, Senior Vice President, Interactive, Product Development, and Innovation, PBS. “The first app from SUPER WHY! launched on iPhone and iPod touch in 2010, then launched on the iPad the day the device itself debuted, and it has been among our most successful apps to date, with nearly half a million downloads.”

Each mini-game in the new SUPER WHY! app is hosted by a different “Super Reader.”  Children are introduced to alphabet letters, common letter sounds and visuals themed to different places around the world in fun, interactive ways that fully leverage the capabilities of iPhone, iPad and iPod touch.
SUPER WHY! ABC Adventures: Alphabet features:

The SUPER WHY! ABC Adventures: Alphabet App is available from the App Store for $2.99 on iPhone and iPod touch or $3.99 on iPad, or at www.itunes.com/appstore.

Images of the SUPER WHY! ABC Adventures: Alphabet App can be found on PBS PressRoom.

PBS KIDS has 18 apps, available in the App Store, covering curricular areas ranging from literacy, to science, to math, and more. Through mobile applications, as well as online games, classroom resources, on-air programming, and curriculum-based toys, PBS KIDS offers educational content to all of America’s children wherever they live, learn and play. More information about PBS KIDS’ apps is available on pbskids.org/mobile.

About SUPER WHY! Reading is power and SUPER WHY! is the only preschool property created to help kids learn the fundamentals of reading through interactive storybook adventures. Produced by Out of the Blue Enterprises in conjunction with DHX Media, the series has a groundbreaking multimedia aesthetic – with a winning combination of two- and three-dimensional animation formats, relatable and engaging characters, and immersive environments. The program represents a novel approach to preschool educational television, featuring a team of superhero characters with reading powers, who jump into books to find answers to everyday preschool challenges. For more information on SUPER WHY, visit PBSKIDS.org/superwhy.

About Out of the Blue Enterprises Out of the Blue Enterprises is a leader in children’s educational media, with a portfolio of breakthrough, interactive, and curriculum-based entertainment concepts that span a variety of viable platforms, including television, video, mobile apps, and consumer products. Out of the Blue creates and produces Super WHY, the hit Emmy-nominated literacy series on PBS KIDS; Daniel Tiger’s Neighborhood, the upcoming animated series inspired by Mister Rogers’ Neighborhood; and Nickelodeon’s Blue’s Room, and handles all licensing and merchandising activity for Super WHY and Daniel Tiger’s Neighborhood. The company also develops top-rated mobile educational game apps, including Super WHY, Chuggington: Terrific Trainee, and Colorforms: Revolution. Led by Co-Founders Angela C. Santomero, Creator of the hit preschool entertainment franchise, Blue’s Clues; and Samantha Freeman Alpert, a former Nickelodeon and toy industry executive, Out of the Blue aims to engage kids and families with age-appropriate, entertaining, and engaging learning experiences.  www.outoftheblueenterprises.com