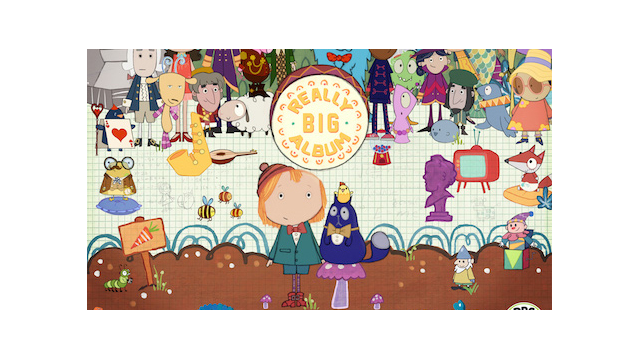 ARLINGTON, VA, May 1, 2014 – Today,PBS KIDS added another album to its digital music collection with the release of “PBS KIDS Presents: Peg and Cat’s Really Big Album” from the hit preschool series PEG + CAT. Now downloadable on iTunes, Amazon and Google Play, the album features 22 songs from the show, designed to help further the series’ math and problem-solving curriculum. Available just in time for summer travel, the album includes tunes such as “100 Is One Zero Zero,” “Sorty Sort Sort” and the series’ popular theme song, to help families extend math learning while they are on the go.

“Music can be a powerful tool in helping children build critical skills for success in school and in life, and it is a central part of PEG + CAT,” said Sara DeWitt, Vice President, PBS KIDS Digital. “The songs on ‘Peg and Cat’s Really Big Album’ introduce foundational math and problem-solving skills in a fun and developmentally appropriate way, while engaging the whole family.”

PEG + CAT debuted last fall on PBS KIDS and follows the adorable, spirited Peg and her sidekick Cat as they embark on adventures and learn foundational math concepts and skills. Created by Billy Aronson (Rent, Postcards from Buster) and Jennifer Oxley (Little Bill, The Wonder Pets!) and produced by The Fred Rogers Company, PEG + CAT brings young viewers a new way to experience math through Peg and Cat’s relatable, and often hilarious, adventures. Each PEG + CAT episode features original songs and fascinating stories in which Peg and Cat encounter a problem that requires them to use math and problem-solving skills to save the day.

Funded in part by the U.S. Department of Education and CPB, PEG + CAT is part of the Corporation for Public Broadcasting (CPB) and PBS Ready To Learn Initiative. Ready To Learn is a federal program that supports the development of innovative educational television and digital media targeted at preschool and early elementary school children and their families.

“Peg and Cat’s Really Big Album” is part of PBS KIDS’ ongoing commitment to provide educational content for kids wherever they live, learn and play – on TV, online, on mobile devices, in the classroom and through educational toys and music.