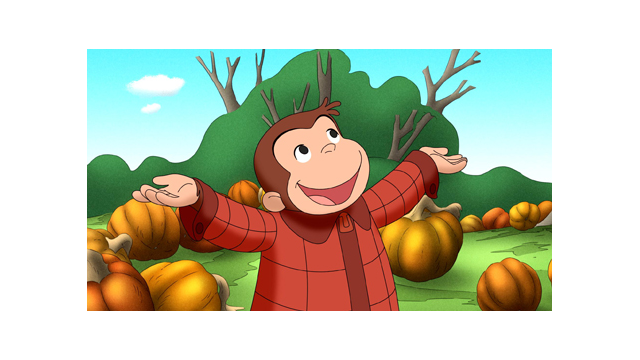 “Consistently a favorite among kids and parents alike, CURIOUS GEORGE takes viewers on adventures grounded in a science and engineering curriculum,” said Lesli Rotenberg, General Manager, Children’s Programming, PBS. “We’re excited to bring this new special from one of our most popular series to families this Halloween on PBS KIDS.”

Throughout the week of October 28, PBS KIDS will feature Halloween programming from other family favorites as well, including new episodes from THOMAS & FRIENDS and its newest series, PEG + CAT, and encore presentations of many other series (check local listings). PBS KIDS will also repeat CURIOUS GEORGE: A Halloween Boo Fest on Halloween. More information on PBS KIDS’ Halloween programming overall and a full list of episodes is available on PBS PressRoom.

Online, a new Halloween-themed CURIOUS GEORGE game will launch in late October on pbskids.org/curiousgeorge. In the game, players will use problem-solving and logical thinking skills as they explore a pumpkin patch with George, encountering playful spooky surprises along the way. Developed in HTML5, the game will be playable across platforms – on computers, mobile devices or tablets. Families will be able to stream clips from CURIOUS GEORGE: A Halloween Boo Fest for free on the PBS KIDS Video App, online at pbskids.org/video and on the PBS KIDS Roku channel.

CURIOUS GEORGE: A Halloween Boo Fest Program Description
It’s George’s first Halloween in the country, and Bill tells him and Allie about the “Legend of No Noggin” – a spooky tale about a hat-kicking scarecrow who haunts the countryside on Halloween. But is the legend real? George and Allie are determined to find out by taking a picture of No Noggin in hat-kicking action. But first, George needs to figure out what he’s going to be for Halloween so he can win the costume contest at the town Boo Festival and give the prize to the Man with the Yellow Hat. Will George be able to put together the perfect costume and find out the truth about No Noggin? Only the curious will find out!

ABOUT THE CURIOUS GEORGE TELEVISION SERIES
CURIOUS GEORGE the television series is designed to inspire kids to explore science, math and engineering in the world around them in a fun and entertaining way. Based on the best-selling Curious George books by Margret and H.A. Rey, the daily series on PBS KIDS expands George’s world to include a host of colorful characters and original locales, while maintaining the charm of the beloved books. Each half-hour episode includes two animated stories followed by short live-action pieces showing real kids who are investigating the ideas that George introduces in his stories. The series encourages inquiry and curiosity, promotes hands-on exploration and shows parents and caregivers how to support children’s science and math-related play.

Imagine Entertainment was founded in 1986 by Ron Howard and Brian Grazer to create movies, television and other original programming. Since its inception, Imagine Entertainment has been honored with more than 60 prestigious awards, including 10 Academy Awards and 37 Emmys. Their past productions include the Academy Award-winning films A Beautiful Mind, 8 Mile, Apollo 13 in addition to The Da Vinci Code and Curious George, and the Emmy and Golden- Globe-winning television series 24 and Arrested Development. Imagine Entertainment has a longstanding production/distribution agreement with Universal Pictures.

About WGBH Boston
WGBH Boston is the number one producer of PBS content for TV and the Web, including such innovative, entertaining, curriculum-based children’s media as Arthur, Curious George (the most-watched show for preschoolers on American television, proven to boost understanding of science and math), Martha Speaks (and its Dog Party mobile app, with measurable impact on kids’ vocabulary), Design Squad Nation, Fetch! with Ruff Ruffman, Postcards from Buster, Between the Lions and Zoom. These join such “produced in Boston, shared with the world” productions as Masterpiece, Nova, Frontline, American Experience and Antiques Roadshow (PBS’ most-watched program). WGBH also is a major source of programs for public radio (including PRI’s The World) and a pioneer in educational multimedia and in technologies and services that make media accessible to the 36 million Americans with hearing or vision loss. WGBH has been recognized with hundreds of honors: Emmys, Peabodys, duPont-Columbia Awards…even two Oscars. Find more information at wgbh.org.

About Universal 1440 Entertainment, LLC
The Universal 1440 Entertainment banner develops and produces live-action and animated productions directly for the home entertainment, television and the stage. Since its formation in 2005, the group has assembled an exceptional roster of animated family fare, including the brand-new animated feature-length home entertainment release The Little Engine That Could; the Daytime Emmy®-winning “Curious George” television series on PBS KIDS; and a string of hit Barbie movies, based on the world-renowned Mattel-branded doll. The group also has successfully built upon some of Universal’s highly celebrated live-action franchises, most recently launching the Tony Award®-nominated hit touring stage production Bring It On: The Musical; the adrenaline-fueled actioner Death Race 3: Inferno; and the epic-adventure sagaThe Scorpion King 3: Battle for Redemption. Projects currently readying for release include the all-new home entertainment features Dead in Tombstone, Curse of Chucky and Little Rascals, a reboot of the beloved family comedy. Universal 1440 Entertainment is a production entity of Universal Studios Home Entertainment (USHE). USHE is a unit of Universal Pictures, a division of Universal Studios (www.universalstudios.com). Universal Studios is a part of NBCUniversal, one of the world’s leading media and entertainment companies in the development, production and marketing of entertainment, news and information to a global audience. NBCUniversal owns and operates a valuable portfolio of news and entertainment television networks, a premier motion picture company, significant television production operations, a leading television stations group, world-renowned theme parks and a suite of leading Internet-based businesses. NBCUniversal is a subsidiary of Comcast Corporation.

Houghton Mifflin Harcourt is a global learning company with the mission of changing lives by fostering passionate, curious learners. Among the world’s largest providers of pre-K-12 education solutions and one of its longest-established publishing houses, HMH combines cutting-edge research, editorial excellence and technological innovation to improve teaching and learning environments and solve complex literacy and education challenges. HMH’s interactive, results-driven education solutions are utilized by 60 million students in 120 countries, and its renowned and awarded novels, non-fiction, children's books and reference works are enjoyed by readers throughout the world. For more information, visit www.hmhco.com.

Curious George is a production of Imagine, WGBH and Universal. Curious George and related characters, created by Margret and H.A. Rey, are copyrighted and trademarked by Houghton Mifflin Harcourt and used under license.  Licensed by Universal Studios Licensing LLC.  Television Series:  © 2013. Universal Studios. All Rights Reserved. The PBS KIDS logo is a registered mark of PBS and is used with permission.   Proud Sponsors of Curious George® on PBS KIDS® are Stride Rite Children's Group, LLC., and ABCmouse.com.