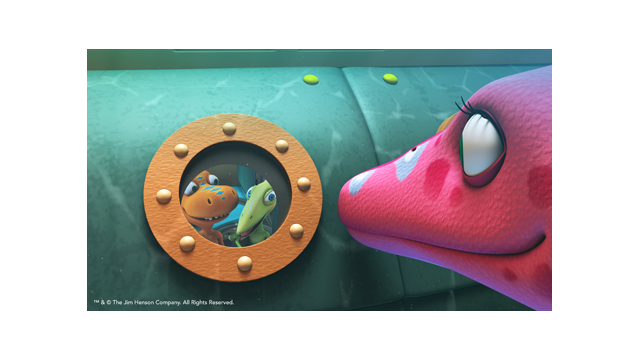 TM and © The Jim Henson Company.

ARLINGTON, VA, January 28, 2013 – On February 18, PBS KIDS will premiere an all-new special from The Jim Henson Company’s hit series DINOSAUR TRAIN. Everyone’s favorite Pteranodon family will dive into an underwater adventure in “Submarine Adventure.” The one-hour program will feature four new stories about sea creatures that lived during the “Age of Dinosaurs.” Preschoolers will meet new friends along the way – from Otto Ophthalmosaurus to Archelon turtles – as they learn about natural science, natural history and paleontology. As part of this multiplatform event, DINOSAUR TRAIN will also feature new content online and on mobile this February. The special will also be available on DVD starting February 19.

“PBS KIDS strives to use media to light a spark – a thirst for learning that will empower kids to actively pursue their interests long after the screen is turned off,” said Lesli Rotenberg, General Manager, Children’s Programming, PBS. “DINOSAUR TRAIN leads kids on this path of exploration with content that is fun and educational, like the ‘Submarine Adventure’ special, which will engage kids in learning natural science and paleontology concepts, while also inspiring them to embark on their own learning adventures in the world around them.”

On-air Special Program Descriptions: “Otto Ophthalmosaurus” When the Pteranodon family takes the Dinosaur Train under the sea to visit their friend Elmer Elasmosaurus, they learn that the Elasmosaurus family is leaving the station to follow their food – the fish. Buddy wants to follow, but the train tunnel doesn't go that way – so Mr. Conductor decides to take the family in a brand-new invention, the Dinosaur Train Submarine! On their journey, they meet a marine reptile called Otto Ophthalmosaurus, who guides the submarine deeper than it’s ever been, and even helps them find their way out of a sea cave.

“Shoshana Shonisaurus” The Pteranodon family goes under the sea again to ride the Dinosaur Train Submarine – this time they go to meet Shoshana Shonisaurus, an enormous marine reptile that’s something between a dolphin and a whale. Since Shoshana loves to dive very deep, Shiny has a problem with following her to the bottom of the sea. Shoshana kindly helps Shiny get over her fear of diving deep.

“Maisie Mosasaurus” The Pteranodon family goes back underwater in the Dinosaur Train Submarine and meets Maisie and Marvin Mosasaurus, a daughter and father who are huge, fast-swimming lizards with flippers. Maisie and Shiny bond when they discover neither likes to go deep in the water. The Pteranodons and Mosasaurus have a great time near the ocean’s surface, each family showing the other how they hunt and catch fish to eat.

“A Sea Turtle Tale” The Pteranodon family is on the beach watching small eggs hatch and baby Archelon turtles emerge and start to swim away.  The family and Mr. Conductor get into the Dinosaur Train Submarine and follow the baby Archelons, who discover their own facts of nature – that their mother doesn’t stay with them after they’re born and that they will grow up to be giant-sized sea turtles.

DVD: PBS Distribution will release DINOSAUR TRAIN “Submarine Adventure” on February 19, 2013. The DVD is available for preorder now on shopPBS.org. Details for the DVD follow:

Images and screeners of DINOSAUR TRAIN “Submarine Adventure” are available upon request or on PBS PressRoom.

From the renowned Jim Henson Company, the hit DINOSAUR TRAIN series encourages scientific thinking and other skills as it teaches children about natural science, natural history and paleontology. The series is part of PBS KIDS’ ongoing commitment to prepare kids for success in school and in life, with cross-platform content that supports learning in key areas such as science, math, and literacy.

About The Jim Henson Company The Jim Henson Company has remained an established leader in family entertainment for over 50 years and is recognized worldwide as an innovator in puppetry, animatronics and digital animation. Best known as creators of the world famous Muppets, Henson has received over 50 Emmy Awards and nine Grammy Awards. Recent credits include the Emmy® nominated SID THE SCIENCE KID, DINOSAUR TRAIN, WILSON & DITCH: DIGGING AMERICA and PAJANIMALS. Features include “The Dark Crystal,” “Labyrinth,” “MirrorMask” and “Unstable Fables”; television productions include “Fraggle Rock” and the sci-fi cult series “Farscape.”

With additional locations in New York and London, The Jim Henson Company is headquartered in Los Angeles on the historic Charlie Chaplin lot, complete with soundstage and post-production facilities. Independently owned and operated by the five adult children of founder Jim Henson, the Company is also home to Jim Henson’s Creature Shop™, a pre-eminent character-building and visual effects group with international film, television and advertising clients, as well as Henson Recording Studios, one of the music industry’s top recording facilities known for its world-class blend of state-of-the-art and vintage equipment. The Company’s Henson Alternative brand has recently announced the national tour of “Stuffed and Unstrung,” a live puppet improvisational show named one of the top 10 Best Stage Shows of 2010 by Entertainment Weekly. www.henson.com