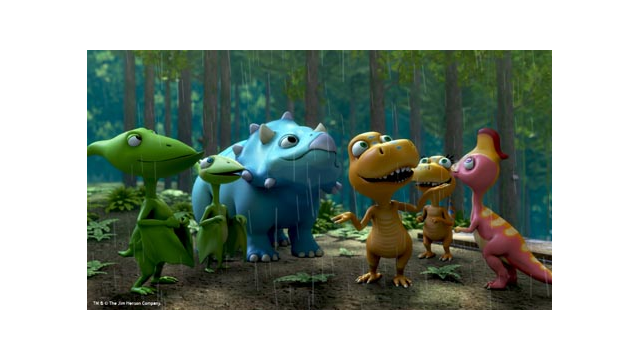 On January 20, families will follow favorite DINOSAUR TRAIN characters as they zipline, raft and mountain climb in a one-hour special

Mr. Conductor and his nephew Gilbert lead Buddy, Tiny, Shiny, Don and friends on an action-packed journey during “Nature Trackers Adventure Camp.” Throughout their adventures at camp, the group finds courage as they race down rivers, have a snowball fight, climb a tall mountain, ride a zipline over the rainforest and hike down a canyon to dig for fossils! Viewers won’t be able to resist tapping their feet and singing along as the whole gang makes discoveries about the world around them.

“Research demonstrates that children today spend less time playing outside than their parents did*; yet studies show that exploring nature helps promote health and wellness and motivates kids to learn,” said Lesli Rotenberg, General Manager, Children’s Programming, PBS.  “At PBS KIDS, we believe a love of nature opens the door to a whole world of science exploration. In DINOSAUR TRAIN ‘Nature Trackers Adventure Camp,’ children learn about earth’s natural wonders with Buddy and friends at their side, while being encouraged to make their own discoveries outdoors.”

PBS KIDS will feature clips and full stories from “Nature Trackers Adventure Camp” online at pbskids.org/video, on the free PBS KIDS Video App and on the PBS KIDS Roku channel. DINOSAUR TRAIN’s website will also re-launch in mobile-friendly HTML5 in mid-January, along with a new game: “River Run!” In this two-player racing game, Buddy and Don paddle through the river collecting insects for Don’s ever-growing collection. Players will learn about river currents and insects as they race to the finish line.

“Nature Trackers Adventure Camp: Rafting”
Buddy, Tiny, Shiny and Don go river rafting for the first time at Nature Tracker Adventure Camp.  Their old pal Jess Hesperornis meets up with them, and they all learn about erosion and the importance of rivers before finishing up their adventure by cruising through some rapids!

Educational Objective: Rivers and streams are ribbons of water that start at a high point and flow downhill – often with streams gathering into rivers. Animals and plants living on land depend on rivers and streams to provide fresh water and nutrients.

“Nature Trackers Adventure Camp: Mountain Climbing”
For their second outing at Nature Trackers Adventure Camp, Buddy, Tiny, Shiny, Don and other friends learn about the tree line as they set out to hike up a mountain. Shiny is determined to get to the top of mountain forest. Buddy wonders if they'll be able to see anything from the mountaintop, through the tall trees. The kids are amazed that the higher they hike, the shorter the trees and bushes become! Then they reach the tree line – a certain point on the mountain where trees are really small because they don't have enough air to breathe and the temperature is too cold. In the end, Shiny and all the kids use teamwork to all reach the mountaintop together!

Educational Objective: The timberline, or tree line, is a certain elevation on a mountain where the temperatures are colder, the air is thin and the soil is less moist, making it hard for most plants and trees to grow. Trees may grow as small shrubs. There is less oxygen, so it's harder for animals to breathe at the tree line and above.

"Nature Trackers Adventure Camp: Ziplining”
The Nature Trackers Adventure Campers are back for another adventure – and this time they'll be travelling to a rainforest! Once they arrive in the dense rainforest, the campers explore different levels of the ecosystem, including the forest floor and the canopy of leaves at the top of the forest. After a hike through the rainforest, the campers’ adventure culminates as each kid takes a ride on a zipline, where they all get a bird’s eye view of the entire rainforest!

Educational Objective: Rainforests are very dense, warm, wet, forests that are home to a vast array of different life forms. Rainforests get a lot of rain, at least 70 inches per year. Rainforests, often called the “lungs of the Earth,” generate much of the oxygen we breathe.

“Nature Trackers Adventure Camp: Canyon Hiking”
The Nature Trackers Adventure Campers are led by Mr. Conductor and Gilbert on a hike down a canyon, where they can see the different layers of the Mesozoic Era! At first, Lily Lambeosaurus is reluctant to go, thinking that a new adventure sounds hard, but Don convinces her that a new adventure can be worth the effort. At the bottom of the canyon, the kids dig for fossils. Each Nature Tracker goes home with a “new” Ammonite fossil, and Lily is so glad she tried something new!

Educational Objective: Canyons are deep cuts in the earth’s surface. They are formed by erosion. Erosion is mainly caused by the flow of rivers. It takes millions of years for canyons to become the grandiose natural landmarks they are today. The bottom rocks in canyons can date back billions of years, beyond the Mesozoic. Canyons can also be formed by a shift of the earth’s tectonic plates.

About The Jim Henson Company
The Jim Henson Company has remained an established leader in family entertainment for over 50 years and is recognized worldwide as an innovator in puppetry, animatronics and digital animation. Best known as creators of the world famous Muppets, Henson has received over 50 Emmy Awards and nine Grammy Awards. Recent credits include the Emmy® nominated “Sid the Science Kid,” “Dinosaur Train,” and “Pajanimals” as well as the new series “Doozers,” a CG animated preschool series. Features include “The Dark Crystal,” “Labyrinth,” “MirrorMask,” and the upcoming “Alexander and the Terrible Horrible No Good Very Bad Day” and television productions include “Fraggle Rock” and the sci-fi cult series “Farscape.”

With additional locations in New York and London, The Jim Henson Company is headquartered in Los Angeles on the historic Charlie Chaplin lot, complete with soundstage and postproduction facilities.  Independently owned and operated by the five adult children of founder Jim Henson, the Company is also home to Jim Henson’s Creature Shop™, a pre-eminent character-building and visual effects group with international film, television, theme park and advertising clients, as well as Henson Recording Studios, one of the music industry’s top recording facilities known for its world-class blend of state-of-the-art and vintage equipment. The Company’s Henson Alternative brand is currently touring “Puppet-Up! - Uncensored,” a live puppet improvisational show.