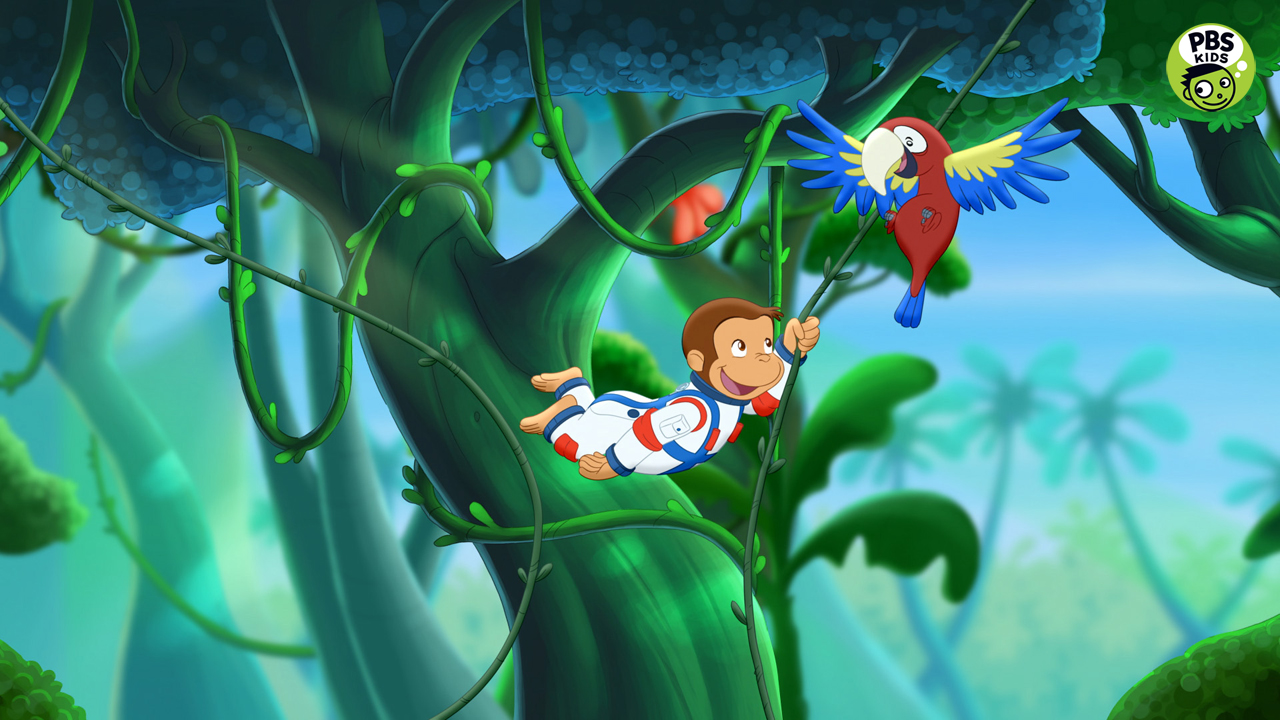 Image: CURIOUS GEORGE 3: BACK TO THE JUNGLE (credit: courtesy of CURIOUS GEORGE is a production of Imagine, WGBH, and Universal. Curious George and related characters, created by Margret and H.A. Rey, are copyrighted and trademarked by Houghton Mifflin Harcourt Publishing Company and using under license. Licensed by UNIVERSAL STUDIOS LICENSING LLC. Television series: (c) 2015 Universal Studios. All rights reserved.)

Featuring the Voice Talents of Angela Bassett and John Goodman, and Music by the Plain White T’s

Television Critics Association Press Tour, Los Angeles, CA, August 1, 2015 – On August 17, Curious George is back to his inquisitive ways with the television premiere of PBS KIDS’CURIOUS GEORGE 3: BACK TO THE JUNGLE. In this adventure-filled feature-length movie, Curious George takes a trip to space but crash-lands in the jungles of Africa, leading to an unforgettable journey with new animal friends. Featuring the voice talents of Angela Bassett and John Goodman, with music by the Plain White T’s, BACK TO THE JUNGLE is a fun-filled journey that the whole family will enjoy.

“Curious George exemplifies PBS KIDS' mission: to spark children’s curiosity and nurture their excitement about exploring the world around them,” said Lesli Rotenberg, General Manager, Children’s Media, PBS. “We know that families love CURIOUS GEORGE, which is our number-one show for kids 2-8*, and PBS KIDS is excited to debut a brand-new movie from everyone’s favorite monkey this summer, featuring adventures, learning moments and humor.”

Press materials related to CURIOUS GEORGE 3: BACK TO THE JUNGLE are available on PBS PressRoom.

CURIOUS GEORGE 3: BACK TO THE JUNGLE

Families will launch into the adventure of a lifetime with everyone’s favorite monkey in CURIOUS GEORGE 3: BACK TO THE JUNGLE. When Curious George is asked to take part in a very important space mission, a little monkeying around forces him to crash-land in Africa. While a worried Man with the Yellow Hat searches for him, Curious George bravely explores the jungle and makes new animal friends along the way. Reunited at last, the two best pals have an unforgettable adventure shared with their new friends! With the voice talents of Angela Bassett and John Goodman, and music by the Plain White T’s, join Curious George on a fun-filled journey that the whole family will enjoy! CURIOUS GEORGE is also available on DVD and Digital HD. #CuriousGeorge

CURIOUS GEORGE 3: BACK TO THE JUNGLE has been awarded the Common Sense Seal from Common Sense Media, for being an entertaining adventure with positive messages about friendship, trying new things and working together.

The world’s most beloved and inquisitive monkey is back in CURIOUS GEORGE 2: FOLLOW THAT MONKEY!, the fun-filled sequel to the hit animated movie. Join Curious George and The Man with the Yellow Hat as they set out on a madcap cross-country adventure to reunite Kayla, a homesick elephant, with her family. This unlikely trio faces all types of comic calamities and colorful characters and, in the end, learn that with family, friends and determination, you can achieve anything. Featuring the voices of Tim Curry, Matt Lauer, Jamie Kennedy and Jerry Lewis, CURIOUS GEORGE 2: FOLLOW THAT MONKEY! highlights the value of family, friends and curiosity.

About the CURIOUS GEORGE Television Series

The CURIOUS GEORGE television series is designed to inspire kids to explore science, math and engineering in the world around them in a fun and entertaining way. Based on the best-selling Curious George books by Margret and H.A. Rey, the daily series on PBS KIDS expands George’s world to include a host of colorful characters and original locales, while maintaining the charm of the beloved books. Each half-hour episode includes two animated stories followed by short live-action pieces showing real kids who are investigating the ideas that George introduces in his stories. The series encourages inquiry and curiosity, promotes hands-on exploration, and shows parents and caregivers how to support children’s science and math-related play.

Imagine Entertainment was founded in 1986 by Ron Howard and Brian Grazer to create movies, television and other original programming. Since its inception, Imagine Entertainment has been honored with more than 60 prestigious awards, including 10 Academy Awards and 37 Emmys. Their past productions include the Academy Award-winning films A Beautiful Mind, 8 Mile and Apollo 13, in addition to TheDa Vinci Code, Curious George and the Emmy and Golden Globe-winning television series 24 and Arrested Development. Imagine Entertainment has a longstanding production/distribution agreement with Universal Pictures.

WGBH Boston is America’s preeminent public broadcaster and the largest producer of PBS content for TV and the Web, including Frontline, Nova, American Experience, Masterpiece, Antiques Roadshow, Arthur, Curious George and more than a dozen other primetime, lifestyle and children’s series. WGBH also is a major supplier of programming for public radio and oversees Public Radio International (PRI). As a leader in educational multimedia for the classroom, WGBH supplies content to PBS LearningMedia, a national broadband service for teachers and students. WGBH also is a pioneer in technologies and services that make media accessible to those with hearing or visual impairments. WGBH has been recognized with hundreds of honors. More info at www.wgbh.org.

The Universal 1440 Entertainment banner develops and produces live-action and animated productions directly for distribution in all media worldwide. Since its formation in 2005, the group has assembled an exceptional roster of animated family fare, including the new animated feature-length film The Little Engine That Could; the Daytime Emmy®-winning Curious George television series on PBS KIDS; and a string of hit Barbie and American Girl movies, based on the world-renowned Mattel-branded dolls. The group also has successfully built upon some of Universal’s highly celebrated live-action franchises, more recently launching the Tony Award®-nominated hit touring stage production Bring It On: The Musical; the epic action-adventure Scorpion King 4: Quest For Power; the adrenaline-fueled actioner Death Race 3: Inferno; and the latest in the terrifying suspense saga Curse of Chucky. Among the projects currently readying for release include and the newest installments of the beloved family franchises:, Curious George 3: Back To The Jungle, R.L. Stine's Monsterville: Cabinet of Souls and The Land Before Time.

Houghton Mifflin Harcourt (NASDAQ:HMHC) is a global learning company dedicated to changing people’s lives by fostering passionate, curious learners. As a leading provider of pre-K–12 education content, services, and cutting-edge technology solutions across a variety of media, HMH enables learning in a changing landscape. HMH is uniquely positioned to create engaging and effective educational content and experiences from early childhood to beyond the classroom.  HMH serves more than 50 million students in over 150 countries worldwide, while its award-winning children’s books, novels, non-fiction, and reference titles are enjoyed by readers throughout the world. For more information, visit www.hmhco.com.