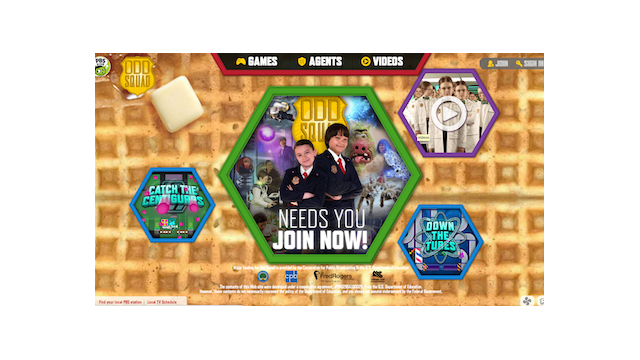 Arlington, VA, October 28, 2014 – Today, PBS KIDS debuted full-length streaming video content and digital games from its newest upcoming media property,ODD SQUAD, giving kids a sneak peek at the series in advance of its November 26 premiere on PBS stations. Six full-length 11-minute “Case Files” from the series, as well as many additional clips that include profiles of the agents, agent training videos, recruitment videos and more, are now available for free on pbskids.org, the PBS KIDS Video App, and PBS KIDS on Roku, Apple TV, Chromecast and Amazon Fire. In addition, two games and parent resources are now available on the series’ website: pbskids.org/oddsquad.

ODD SQUAD focuses on two young agents, Olive and Otto, who are part of Odd Squad, an agency whose mission is to save the day whenever something unusual happens in their town. A math concept is embedded in each of their cases, as Olive and Otto work together to problem-solve and set things right. Each episode of ODD SQUAD will consist of two 11-minute stories as well as interstitial content. ODD SQUAD, aimed at kids ages 5-8, premieres on Wednesday, November 26, 2014, on PBS KIDS with a special one-hour broadcast of two back-to-back episodes: “Zero Effect/Bad Luck Bears” and “Soundcheck/Double Trouble.” The series will air weekdays following its premiere on PBS stations (check local listings).

“PBS is committed to providing all Americans with inventive, educational and engaging content across platforms,” said Ira Rubenstein, Senior Vice President and General Manager, Digital, PBS. “We are excited to offer our young viewers the opportunity to start exploring the world of ODD SQUAD now through funny videos and interactive games, and build anticipation of the launch of this new media property on PBS member stations, providers of trusted, educational kids content in communities across the country.”

ODD SQUAD is created by Tim McKeon (Foster's Home for Imaginary Friends, Adventure Time, The Electric Company) and Adam Peltzman (The Electric Company, The Backyardigans, Wallykazam!) and produced by Sinking Ship Entertainment and The Fred Rogers Company. ODD SQUAD is funded by the Corporation for Public Broadcasting (CPB) and the U.S. Department of Education through the CPB-PBS Ready To Learn Initiative, a program that supports the development of innovative educational television and digital media targeted to preschool and early elementary school children and their families.

“For more than 45 years, public media, provided for free and commercial free, has been America’s most trusted source for high quality children’s educational programming and content,” said Debra Sanchez, Senior Vice President of Education, CPB. “By making ODD SQUAD videos and games available to children across multiple digital platforms, we are ensuring that no matter where a child is, he or she can be learning.”

ODD SQUAD’s website offers a variety of engaging games, activities and videos for kids, as well as parent and caregiver resources. Children can sign up to become Odd Squad agents online and earn rewards as they play math games inspired by the series. Online games include “Down the Tubes,” where children can discover the vast network of tubes that serve as the main method of transportation for all Odd Squad agents. Players use their mathematical savvy to repair the tubes using pieces of different lengths and shapes. Also available on pbskids.org/oddsquad, “Catch the Centigurps”is a side-view arcade-style game in which players use gadgets to collect Centigurps (fuzzy creatures that are drawn to spherical objects) as they bounce wildly around the room. New content, including additional games and parent resources, will continually be added to the website following the November 26 premiere of ODD SQUAD.

About Sinking Ship Entertainment
Sinking Ship Entertainment is an award-winning production and interactive company that creates and produces groundbreaking kids TV and transmedia content. Since its founding in 2004, Sinking Ship has created and produced numerous children’s TV series and has been on the forefront of TV production and interactive media for kids. From being selected as one of the first partners of Amazon Studios with the upcoming series “Annedroids” to achieving Nick Jr.’s highest debut of all time with the action-packed series “Dino Dan,” Sinking Ship Entertainment brings dynamic content to audiences around the world with shows broadcast in more than 130 countries. Other series highlights include the award-winning “This is Daniel Cook,” “This is Emily Yeung” and “Are We There Yet?: World Adventure.” Find out more atwww.sinkingship.ca.