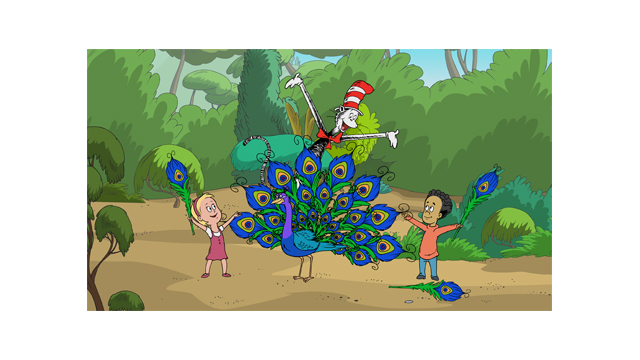 A special week of science-focused THE CAT IN THE HAT KNOWS A LOT ABOUT THAT! kicks off with a new one-hour special on Monday, March 3

Arlington, VA, February 19, 2014 – PBS KIDS has announced a week of new adventures with the Cat in the Hat to celebrate Dr. Seuss’ birthday. “Dr. Seuss’ Birthday Cat-ebration” kicks off on Monday, March 3, with the debut of a one-hour THE CAT IN THE HAT KNOWS A LOT ABOUT THAT! special. New half-hour episodes also premiere on Tuesday, March 4, and Wednesday, March 5. The new episodes follow the Cat, Nick and Sally as they explore a variety of animal attributes: from the benefits of crickets’ chirps and birds’ feathers, to the mimic octopus’ remarkable ability to imitate other sea creatures. Viewers also learn how glass is made, how multi-legged creatures walk and how cotton is spun into fabric.

“As children across the U.S. celebrate Dr. Seuss’ birthday this March, PBS KIDS is proud to join the festivities with new adventures from one of his most iconic characters: the Cat in the Hat,” said Lesli Rotenberg, General Manager, Children’s Programming, PBS. “Through ‘Dr. Seuss’ Birthday Cat-ebration,’ we hope to inspire kids and stimulate their imaginations with a week of natural science exploration. In this special multiplatform event, families will join the Cat, Nick and Sally as they journey to zany Seussian places — from the Grassy-Grove-Dell to Feathery Flats — and learn from their quirky animal friends, such as Bugsy the Beetle, Sharky McGee and Greg the Gecko.”

High-resolution images from this special week of THE CAT IN THE HAT KNOWS A LOT ABOUT THAT! are available on PBS PressRoom; screeners and clips are available upon request.

The following is a listing of the episodes that will air during “Dr. Seuss’ Birthday Cat-ebration” – March 3-7, 2014 (check local listings).

“Step This Way”: The kids are playing dress-up, with Sally wearing her mom’s shoes and Nick wearing his dad’s shoes. They're having trouble walking, and the Cat thinks it’s because their feet are the wrong shape. But doesn’t everyone have the same shaped feet? Not at all! The Cat takes them to the Jungle of Bingle-Bungle Boo to meet his friends Emily the Teal, Mikey the Lemur and Greg the Gecko. They see that animals have differently shaped feet to help them do different things! You need the right feet for the right job!

Educational Objective: The mimic octopus has a remarkable ability to imitate other sea creatures.

“Name That Sound”: Sally and Nick are trying to stump each other by guessing the animal sounds they’re making. The Cat stumps them both when he tries to make the sound of a cricket!  But that didn't sound like a cricket. They all try but just can’t figure out how a cricket makes its noise. Well, Cat's friend Clarence the Cricket can surely show them! Off to the Grassy-Grove-Dell to meet him! He shows him his wings, one that is comb-like, the other a scraper; when he rubs them together, he makes his wonderful cricket noise. Back at home, Nick and Sally find things around the house they can use to mimic Clarence — a deck of cards and a comb!

Educational Objective: Male crickets make a chirping sound by scraping one pegged wing against the other wing, which is ridged. This is done so fast one doesn’t hear the individual clicks, rather a trilling chirp, which is why it is hard for us to copy. The sound is used to get the attention of other crickets, either as a warning or for mating.

“Fabulous Feathers”: Sally is playing dress-up, but her favorite hat no longer has any feathers on it. Where can they find more? The Cat’s good friend Puranjay might be able to help! He’s a peacock who lives in Feathery Flats; he has plenty of feathers! Sally collects the feathers that have fallen out of Puranjay and discovers that each one has its own distinct job. But it’s his tail feathers that are just jazzy and snazzy enough for her hat! They are the most fabulous feathers!

“Balancing Act”: Sally and Nick are trying to walk across a beam in their backyard, but are having trouble staying on it! Can the Cat help? Why of course! His friend Zappa the Snow Leopard is an amazing balancer! He uses his big wide feet and his long tail to help him keep his balance. Nick and Sally don't have tails, but they see how Zappa moves carefully to keep his weight balanced. Now they know what to do at home. Using broomsticks to help them stay balanced, Nick and Sally are able to cross the balance beam. And just in time to have some yummy bran berry muffins!

“Marvelous Marbles”: The kids are playing with glass marbles, until one of them rolls away! It was Nick’s “extra luck never miss marble.” Now what is he going to do? Cat will take the kids to a sandy beach that’s full of marbles! But when they get there, all they see is sand. Cat’s friend Sharky McGee explains that sand makes glass. He shows them how sand is turned into glass and all the wonderful things you can make with it — including marbles!

Educational Objective: Glass is made from tiny particles of sand, then formed into all sorts of useful items.

“Take a Walk”: Sally and Nick are practicing to be in a three-legged race, but walking on three legs is hard! Well, if anyone knows about walking, its Cat’s friends Sid the Centipede, Spinny the Spider and Bugsy the Beetle! They all teach the kids how they walk on many legs by keeping a steady pace and walking in a rhythm and a beat. Back at home, Nick and Sally practice what they learned by using their own special rhythm!

“Cotton Patch”: Oh no! Nick has torn his favorite shirt! He needs a perfect patch of cotton to fix it. Good thing Cat’s friend Dr. Twiggles knows all about cotton! Off to Fluff’n Stuff Fields to see him! Once there, the kids are astonished to learn that you can make clothes from plants! Dr. Twiggles shows them how to pick the cotton, clean and dry it, comb it and spin it into thread. Finally, he demonstrates how the thread comes together to make a patch by using his loom. They even learn how to dye the cotton by using berry juice. Nick’s favorite shirt is as good as new!

Educational Objective: Nick and Sally discover how the cotton fibers of the cotton plant can be cleaned, carded, spun and woven to make clothes.

A team of science and early childhood experts developed the curriculum for the series, each episode of which begins with a question posed by Sally or Nick. Although the Cat in the Hat knows a lot of things, his insatiable curiosity to learn more about the world leads to adventures with Sally and Nick in his one-of-a-kind Thinga-ma-jigger, a marvelously Seuss-ian contraption that sprouts wings, pontoons, booster rockets, skis and just about anything else needed to find the answer. The inquisitive gang travels to the bottom of the sea to observe giant sea worms, zips to the rain forest to visit animals living in kapok trees and shrinks to bee-size to visit a hive and learn how honey is made. Guided by the Cat in the Hat, the kids figure things out by observing, collecting and managing clues, making connections, constructing and evaluating theories and having discussions – all in a preschool-appropriate manner.

THE CAT IN THE HAT KNOWS A LOT ABOUT THAT! is a Portfolio Entertainment/Collingwood O’Hare Production, A Canada UK Co-Production produced with PBS (USA), Treehouse (Canada), in association with Dr. Seuss Enterprises and Random House Children’s Entertainment and with the financial participation of the Canadian Media Fund, the Shaw Rocket Fund and the Government of Canada. The series is distributed by Portfolio International.