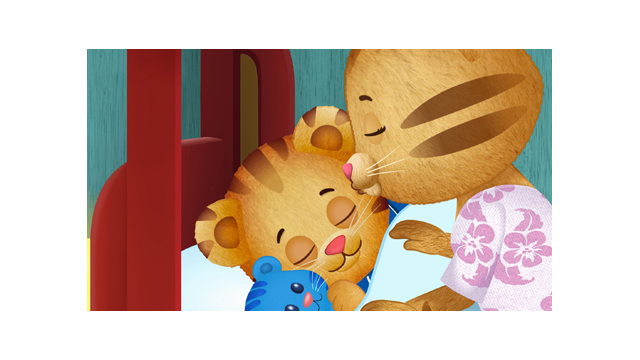 ARLINGTON, VA, August 29, 2013 – PBS KIDS has announced its second app from the popular series DANIEL TIGER’S NEIGHBORHOOD – Daniel Tiger’s Day & Night. The app, designed for children ages 2-4, is now available on iPhone, iPad and iPod touch. Daniel Tiger’s Day & Night helps kids learn basic morning and nighttime routines from Daniel Tiger as he gets ready for school in the morning and ready for bed at night. The app’s songs and games encourage kids to tap into their imaginations as they make believe with Daniel.

“Daniel Tiger’s Day & Night App helps kids practice important daily routines, like tying shoes and brushing teeth, through engaging games and songs,” said Lesli Rotenberg, General Manager, Children’s Programming, PBS. “As young children learn and grow, routines like these are critically important because they help kids anticipate what will happen next in their lives, giving them a sense of control, security and confidence.”

Daniel Tiger’s Day & Night App debuts just in time for “Neighbor Day” on Monday, September 2, a special DANIEL TIGER’S NEIGHBORHOOD event, which also includes a new episode on-air and a new online game. On-air, a special half-hour episode entitled “Neighbor Day” premieres on PBS KIDS. In “Neighbor Day,” Daniel learns how good it feels to be neighborly – and that one act of kindness can lead to many more. Online, a new game, “Tea Party,” is now available. In this new game, children help Daniel set up and play tea party with his friends. The game helps kids practice important skills, such as taking turns and thinking about the needs of others.

“Families responded so well to last year’s launch of Play at Home with Daniel that we were eager to create another app that extends the series,” said Jason Seiken, General Manager, Digital, PBS. “Among other accolades, the series’ Life’s Little Lessons album recently became one of the Top 10 Children’s Music albums on iTunes, and the Play at Home with Daniel App has been downloaded hundreds of thousands of times.”

“Daniel Tiger’s Neighborhood has gone mobile with more than 30 million streams each month on phones and tablets,” said Paul Siefken, Vice President of Broadcast and Digital Media, The Fred Rogers Company. “Children’s daily routines don’t happen in one place, so the Day & Night app allows for learning anywhere throughout the day.”

Daniel Tiger’s Day & Night App
The app includes eight games about morning and nighttime routines, along with Good Morning and Good Night strategy songs to reinforce those routines. There is also a built-in timer that can be used to help children stay on task.

-Get Dressed: Help Daniel get dressed in his red sweater. Then, imagine with Daniel that his sweater is a “Super Daniel” costume.

-Breakfast: Help set the table as Daniel gets ready for breakfast. Have fun topping a pancake and then imagining that the pancake can dance!

-Brush Teeth: Help Daniel brush his teeth by moving your finger back and forth.

-Shoe Time: Choose a pair of shoes for Daniel to wear and help him tie them. Then, imagine that his shoes can make him jump super high.

-Bedtime Story: In this imagination sequence, move Daniel through the clouds as his mom reads a story and sings a calming bedtime song.

The Daniel Tiger’s Day & Night App is available for $2.99 from the App Store on iPhone, iPad and iPod touch or at www.AppStore.com/PBSKIDS.

The app will be available on Android later this fall.

Images of Daniel Tiger’s Day & Night App can be found on PBS PressRoom.

About DANIEL TIGER’S NEIGHBORHOOD
The first TV series inspired by the iconic, award-winning MISTER ROGERS' NEIGHBORHOOD, DANIEL TIGER'S NEIGHBORHOOD from The Fred Rogers Company stars 4-year-old Daniel Tiger, son of the original program’s Daniel Striped Tiger, who invites young viewers into his world, giving them a kid’s-eye view of his life. As they closely follow and share Daniel’s everyday adventures, preschoolers ages 2-4 and their families learn fun and practical strategies and skills necessary for growing and learning.