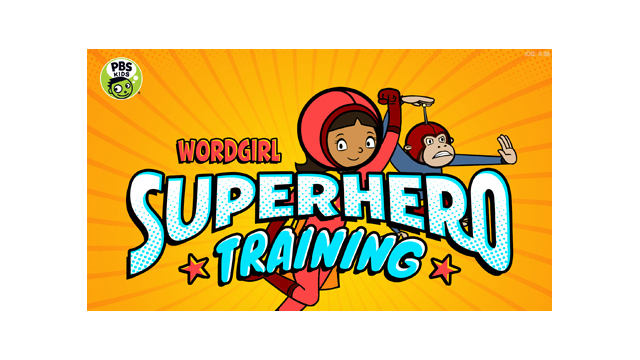 In innovative WORDGIRL Superhero Training App for iPad and Android tablets, kids create their own avatars and build superhero skills and vocabulary alongside WordGirl

ARLINGTON, VA, November 14, 2013 –PBS KIDS today announced the launch of the WORDGIRL Superhero Training App for iPad and Android tablets, a new mobile app based on the popular series WORDGIRL. In the app, kids train to be a superhero alongside WordGirl and Captain Huggy Face. Users create their own superhero avatars and face off against WordGirl’s most famous villains in a series of four exciting games. The app was produced by Scholastic Media – a division of Scholastic Inc., the global children‘s publishing, education and media company.

“PBS KIDS offers educational media experiences for children wherever they are, by bringing their favorite characters to a variety of platforms,” said Lesli Rotenberg, General Manager, Children’s Programming, PBS. “In each episode of the PBS KIDS series, WordGirl uses her super power – vocabulary – to save the day. Through the WORDGIRL Superhero Training App, we are excited to give kids the opportunity to be superheroes themselves, helping WordGirl defeat villains and learning new words along the way.”

Throughout each game in WORDGIRL Superhero Training, players earn fun and hilarious gear that they can use to customize their superhero avatars. Throughout the app, players can earn up to 48 pieces of gear, and within each game, there are 30 levels.

WordGirl vs. The Whammer – In this game, players build their superhero memory skills as they help WordGirl put various items in Fair City back together. Each level is designed to expose players to new vocabulary.

Captain Huggy Face vs. The Butcher – Players must be quick to fend off the Butcher’s meat attack to win this game. While players train their superhero reflex skills, they also focus on vocabulary, identifying which words go with specific categories.

WordGirl vs. Chuck the Evil Sandwich Making Guy – In this game, Chuck has designed a mischievously tricky sandwich order for players to follow. Players use skills in listening, critical thinking and logic to solve each level while learning about prepositions and sequential language.

WordGirl vs. Dr. Two Brains – Players train their superhero navigation skills as they move WordGirl through a maze of portals to find Dr. Two Brains. Within the maze, players encounter new vocabulary in synonym word pairings.

The WORDGIRL Superhero Training App is available for $1.99 from the App Store on iPad or at www.AppStore.com/PBSKIDS. The app is also available for Android tablets on the Amazon Appstore and Google Play.

Images of the WORDGIRL Superhero Training App are available on PBS PressRoom. Additional information about the series can be found at mediaroom.scholastic.com/wordgirl and at facebook.com/WordGirl.

WORDGIRL, the Emmy® Award-winning series created and produced by Scholastic Media’s animation studio Soup2Nuts, follows the everyday life and superhero adventures of WordGirl as she fights crime and enriches vocabulary usage, all in a day’s work. Disguised as a mild-mannered 5th-grader, Becky Botsford, WordGirl arrived on planet Earth when she and her monkey sidekick, Captain Huggy Face, crashed their spaceship. WordGirl possesses superhero strength, with the added benefit of a colossal vocabulary. Each episode introduces four new vocabulary words and reinforces their meanings in a variety of contexts. WORDGIRL airs weekdays on PBS KIDS (check local listings).