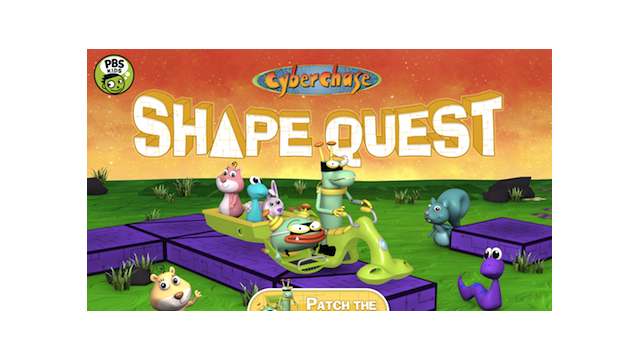 Arlington, VA, January 9, 2014 – PBS KIDS has announced its newest augmented reality app, based on the Emmy-award winning math series CYBERCHASE. A production of THIRTEEN in association with PBS KIDS, WNET and Curious Media, Cyberchase Shape Quest is available exclusively for iPad at launch and will be available next month for select Android tablet devices. The free app follows popular characters Buzz and Delete in a fun-filled adventure that includes three math-based games focused on geometry, spatial reasoning, and problem solving for kids ages 6-9. The app was funded by a U.S. Department of Education Ready To Learn grant to the Corporation for Public Broadcasting (CPB) and PBS.

Cyberchase Shape Quest’s augmented reality game, “Patch the Path,” uses a tablet’s camera to combine the real world with the app’s digital content. Within the app, kids will travel through five different environments and apply spatial memory, visualization and modeling skills, while investigating, predicting, putting together and taking apart two- and three-dimensional shapes. Kids will use their device’s camera and a printable board game to interact with shapes and dimensions.

Additional games include “Feed the Critters,” a spatial reasoning game, and “Hide and Seek,” which focuses on geometry vocabulary. The augmented reality game board can be downloaded at pbskids.org/shapequest.

“At PBS KIDS our goal is to use the power of media to nurture kids’ natural curiosity and inspire them to explore the world around them beyond the screen,” said Lesli Rotenberg, General Manager Children’s Programming, PBS. “With the launch of Cyberchase Shape Quest, PBS KIDS’ second augmented reality app, our goal is to leverage the intersection of the digital and physical world to help increase kids’ learning.”

Cyberchase Shape Quest is available for free from the App Store on iPad or at www.AppStore.com/PBSKIDS.

Cyberchase Shape Quest is based on CYBERCHASE, a math series produced by THIRTEEN Productions LLC in association with WNET that airs on PBS KIDS (check local listings). For more adventures with CYBERCHASE, visit pbskids.org/cyberchase. Images and other press materials about the series are available on PBS PressRoom.

About CPB
The Corporation for Public Broadcasting (CPB), a private, nonprofit corporation created by Congress in 1967, is the steward of the federal government’s investment in public broadcasting. It helps support the operations of more than 1,400 locally-owned and -operated public television and radio stations nationwide, and is the largest single source of funding for research, technology, and program development for public radio, television and related online services.

About WNET
As New York’s flagship public media provider and the parent company of THIRTEEN and WLIW21 and operator of NJTV, WNET brings quality arts, education and public affairs programming to more than 5 million viewers each week. WNET produces and presents such acclaimed PBS series as Nature, Great Performances, American Masters, PBS NewsHour Weekend, Charlie Rose and a range of documentaries, children’s programs, and local news and cultural offerings available on air and online. Pioneers in educational programming, WNET has created such groundbreaking series as Get the Math, Oh Noah! and Cyberchase and provides tools for educators that bring compelling content to life in the classroom and at home. WNET highlights the tri-state’s unique culture and diverse communities through NYC-ARTS, Reel 13, NJTV News with Mike Schneider and MetroFocus, the multi-platform news magazine focusing on the New York region. WNET is also a leader in connecting with viewers on emerging platforms, including the THIRTEEN Explore iPad App where users can stream PBS content for free.