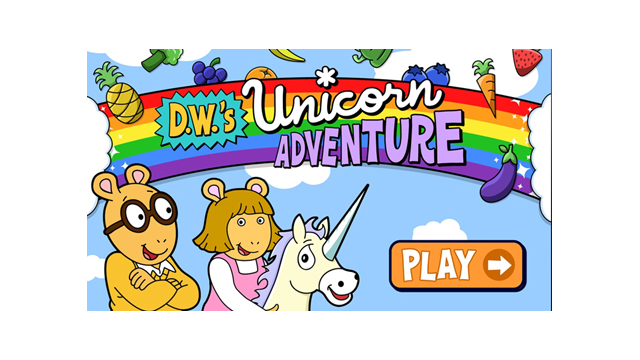 ARLINGTON, VA, March 29, 2012 – PBS and WGBH today announced the first app from the PBS KIDS GO! series ARTHUR – D.W.’s Unicorn Adventure for iPhone and iPod touch, available now on the App Store.  Funded by the Corporation for Public Broadcasting (CPB) and produced by WGBH, D.W.’s Unicorn Adventure encourages nutritious snacking for kids ages 4-6, and ARTHUR fans of all ages. In the app, players have the opportunity to help Arthur’s little sister D.W. save a lost unicorn using the power of healthy foods.

To fuel the adventure, players need to eat a rainbow of energy-packed snacks. Players are encouraged to eat all the colors of the rainbow by collecting 12 kinds of fruits and veggies: strawberries and apples; oranges and carrots; bananas and pineapples; bell peppers and broccoli; blueberries and plums; and grapes and eggplant.

The game also teaches kids foods to avoid.  For example, players need to stay away from junk food, so that they will not lose energy and can continue to advance in the game. The six kinds of junk food that will hinder performance include: sodas, chips, cookies, donuts, french fries, and candy bars.

“At PBS we continue to extend the reach of our content in the mobile space, giving families the educational content they expect from us on a platform that is available to them wherever they are,” said Jason Seiken, Senior Vice President, Interactive, Product Development, and Innovation, PBS. Funded by CPB, D.W.’s Unicorn Adventure App is available for $1.99 from the App Store on iPhone and iPod touch or at www.itunes.com/appstore.

PBS KIDS has 16 apps available in the App Store, covering curricular areas ranging from literacy, to science, to math, and more.  Through mobile applications as well as online games, classroom resources, on-air programming, and curriculum-based toys, PBS KIDS offers educational content to all of America’s children wherever they live, learn and play.  More information about PBS KIDS’ apps is available on pbskids.org/mobile.

Images of D.W.’s Unicorn Adventure App can be found on PBS PressRoom.

About ARTHUR
ARTHUR, the longest running kids animated series on television, chronicles the adventures of Arthur, an eight-year old aardvark, his family (including his little sister, DW) and his friends through engaging, emotional stories that explore issues from a kid’s point of view. The TV series and its supporting web site at pbskids.org/arthur are designed to foster an interest in reading and writing, and to encourage positive social skills. Over the past 15 seasons, Arthur has remained one of the highest rated weekday series on PBS, and has won numerous awards, including the George Foster Peabody Award, a BAFTA and six Daytime Emmys®. Visit the series website at http://pbskids.org/arthur

About WGBH Boston
WGBH Boston is America’s preeminent public broadcasting producer, the source of one-third of PBS’s prime-time lineup along with some of public television’s best-known lifestyle shows, many public radio favorites, and a roster of children’s programs that empower kids with innovative, entertaining, curriculum-based content. Among the WGBH-produced children’s titles: Arthur, Curious George, Postcards from Buster, Between the Lions, Design Squad Nation, Martha Speaks and Fetch! with Ruff Ruffman. WGBH is the number-one producer of websites on pbs.org, one of the most trafficked dot-org websites in the world, and a pioneer in educational multimedia and in technologies and services that make media accessible to the 36 million Americans who rely on captioning or video descriptions. WGBH has been recognized with hundreds of honors: Emmys, Peabodys, DuPont-Columbia Awards, and even two Oscars. In 2002, WGBH received a special institutional Peabody Award for 50 years of excellence. For more information, go to http://www.wgbh.org/.

Photo credit: © 2012 WGBH Educational Foundation. All characters and underlying materials (including artwork) copyright by Marc Brown. Arthur, D.W., and the other Marc Brown characters are trademarks of Marc Brown. Used with permission.