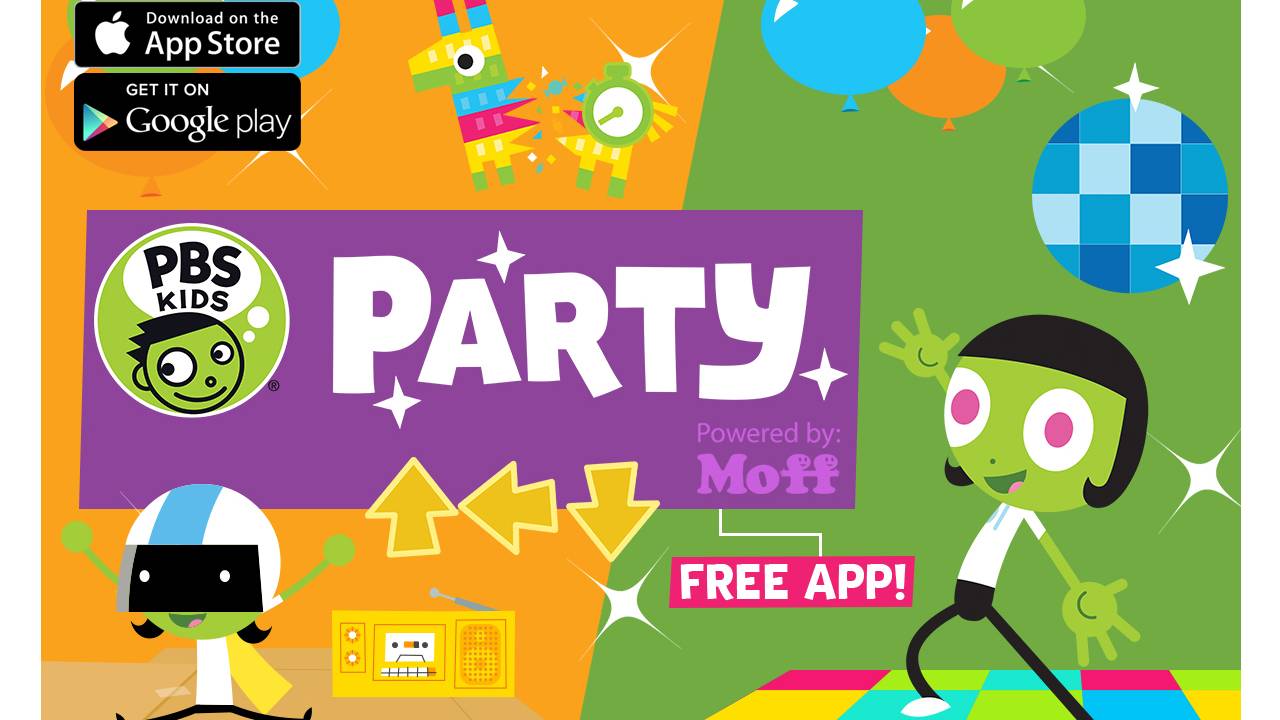 PBS KIDS has partnered with Moff to launch the PBS KIDS Party App.

ARLINGTON, VA, November 19, 2015 – Today, PBS KIDS enters the kids’ wearable tech space with the launch of a new app. The leading educational children’s media brand has partnered with Moff, makers of the award-winning kids’ wearable Moff Band, to launch the new, free PBS KIDS Party App, which provides a unique digital experience that encourages movement and creative play. The app can be played with a mobile or tablet device, and is enhanced even further with the use of a Moff Band, a wearable smart toy that enables kids to play games and make sounds through movement. With the debut of this innovative app, PBS KIDS extends its commitment to using leading-edge technology to help kids learn in new and groundbreaking ways.

“The Moff Band brings wearable technology designed for kids,” said Aki Takahagi, Co-founder and CEO, Moff. “Collaborating with PBS KIDS allows Moff to partner our wearable expertise with the compelling content of America’s leading educational children’s media brand. As a result, we have created one of the most educational kids’ wearable apps — the PBS KIDS Party App.”

Designed for 5- to 8-year-olds, PBS KIDS Party uses the latest advances in wearable tech to help kids learn through imaginative play and movement with interactive games that integrate dancing, counting and more. The app connects to a Moff Band via Bluetooth for an enhanced experience, enabling kids to play through four different sections, including movement- and creativity-focused activities that encourage them to move away from the device and be imaginative in how they play. PBS KIDS Party is also playable without the Moff Band, using a mobile or tablet device.

PBS KIDS Party includes the following four games, designed to foster learning through active play. Additional games will be added in the coming months, including a motion number game focusing on early elementary math skills, as well as more interactivity throughout the app.

PBS KIDS Party is now available for free on iPhone, iPad and iPod touch, as well as Android mobile and tablet devices in the Google Play store.

About Moff
Moff is the maker of the award-winning Moff™ Band, the world’s first wearable smart toy. The Moff Band enables kids to play sounds and games through movement. Powering the Moff Band is a cloud-based motion and position recognition platform that analyzes and learns users’ real-time behaviors and patterns. For more information on the Moff Band, visit moff.mobi, or follow Moff on Twitter and Facebook. Developer partners interested in more information on the Moff Engine software development kit can contact info@moff.mobi.