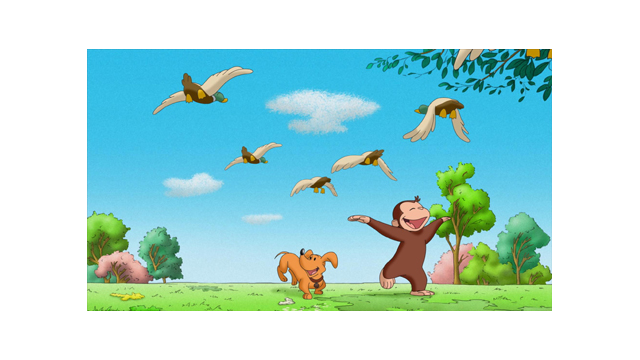 Arlington, VA, June 24, 2013 – The PBS KIDS preschool series CURIOUS GEORGE continues to be a favorite among parents and children. On April 22, 4.3 million viewers tuned in to the one-hour CURIOUS GEORGE SWINGS INTO SPRING special and were charmed by everyone’s favorite monkey.* Among the fans were 2.2 million kids between the ages of 2 – 11 and the special attracted 324,000 new viewers.*

Nielsen ratings for CURIOUS GEORGE SWINGS INTO SPRING were the highest for any PBS KIDS special this year, earning a 9.5 kids 2-5 rating, a 7.0 rating among kids ages 2-8, a 4.7 rating with kids ages 4-8 and a huge 5.7 rating among moms.*

“CURIOUS GEORGE SWINGS INTO SPRING was a great success, helping to bring CURIOUS GEORGE back to #1 among kids ages 2 – 5 for the month of April, a spot that it held every month in 2012,” said Lesli Rotenberg, General Manager, Children’s Programming, PBS. “We are thrilled to see more and more viewers tuning in to the series, which teaches kids about science, engineering and math, and inspires them to explore the world around them long after the screen is turned off.”

After enjoying the special on air, families continued interacting with the show online. CURIOUS GEORGE reported nearly 37 million streams for the month of April across web and mobile platforms, up 77 percent compared to April 2012.** The CURIOUS GEORGE website received 1.7 million unique visitors for the month.**

ABOUT THE CURIOUS GEORGE TELEVISION SERIES
CURIOUS GEORGE the television series is designed to inspire kids to explore science, math, and engineering in the world around them in a fun and entertaining way. Based on the best-selling Curious George books by Margret and H.A. Rey, the daily series on PBS KIDS expands George’s world to include a host of colorful characters and original locales, while maintaining the charm of the beloved books. Each half-hour episode includes two animated stories followed by short live-action pieces showing real kids who are investigating the ideas that George introduces in his stories. The series encourages inquiry and curiosity, promotes hands-on exploration, and shows parents and caregivers how to support children’s science and math-related play.

Imagine Entertainment was founded in 1986 by Ron Howard and Brian Grazer to create movies, television and other original programming. Since its inception, Imagine Entertainment has been honored with more than 60 prestigious awards, including 10 Academy Awards and 37 Emmys. Their past productions include the Academy Award-winning films A Beautiful Mind, 8 Mile, Apollo 13 in addition to The Da Vinci Code, and Curious George, and the Emmy and Golden- Globe-winning television series 24 and Arrested Development. Imagine Entertainment has a long standing production/distribution agreement with Universal Pictures.

About WGBH Boston
WGBH Boston is the number one producer of PBS content for TV and the Web, including such innovative, entertaining, curriculum-based children’s media as Arthur, Curious George (the most-watched show for preschoolers on American television, proven to boost understanding of science and math), Martha Speaks (and its Dog Party mobile app, with measurable impact on kids’ vocabulary), Design Squad Nation, Fetch! with Ruff Ruffman, Postcards from Buster, Between the Lions, and Zoom. These join such “produced in Boston, shared with the world” productions as Masterpiece, Nova, Frontline, American Experience, and Antiques Roadshow (PBS’s most-watched program). WGBH also is a major source of programs for public radio (including PRI’s The World) and a pioneer in educational multimedia and in technologies and services that make media   accessible to the 36 million Americans with hearing or vision loss. WGBH has been recognized with hundreds of honors: Emmys, Peabodys, duPont-Columbia Awards…even two Oscars. Find more information at wgbh.org.

About Universal 1440 Entertainment, LLC
The Universal 1440 Entertainment banner develops and produces live-action and animated productions directly for the home entertainment, television and the stage.  Since its formation in 2005, the group has assembled an exceptional roster of animated family fare. including the brand-new animated feature-length home entertainment release The Little Engine That Could; the Daytime Emmy®-winning “Curious George” television series on PBS KIDS; and a string of hit Barbie movies, based on the world-renowned Mattel-branded doll. The group also has successfully built upon some of Universal’s highly celebrated live-action franchises, most recently launching the Tony Award®-nominated hit touring stage production Bring It On: The Musical; the adrenaline-fueled actioner Death Race 3: Inferno; and the epic-adventure saga The Scorpion King 3: Battle for Redemption.  Projects currently readying for release include the all-new home entertainment features Dead in Tombstone, Curse of Chucky and Little Rascals, a reboot of the beloved family comedy. The group is part of Universal Studios Home Entertainment.

Curious George: ® & © 2013 Universal Studios and/or HMH.  All Rights Reserved.  FOR PROMOTIONAL USE ONLY.