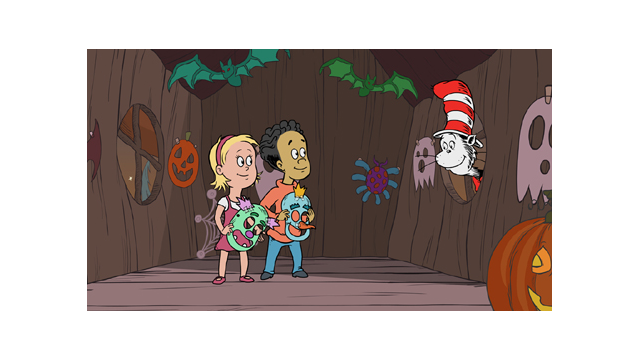 Arlington, VA – September 19, 2011 – October is shaping up to be a “monstrously” entertaining month for PBS KIDS with Halloween-themed episodes of kids’ favorite series and a dedicated “Predator Week” from popular animal exploration series WILD KRATTS.

PBS KIDS gears up for Halloween with a bevy of Halloween-themed episodes, including brand new episodes of science-focused series DINOSAUR TRAIN, SID THE SCIENCE KID, THE CAT IN THE HAT KNOWS A LOT ABOUT THAT!, and WILD KRATTS.  From October 17 through 31, children can ride the Night Train to a “haunted house” with DINOSAUR TRAIN, learn some “spooky science” with Sid, trick-or-treat with the Cat, and attend a creature costume party with the Kratts in this lineup of new episodes.

“Halloween is such a fun holiday for kids, and gives us the opportunity to tell entertaining stories while also covering interesting concepts, from learning about predators and prey to experimenting with the chemistry of making slime,” said Lesli Rotenberg, Senior Vice President, Children’s Media, PBS.

The “creature-filled” fun also includes WILD KRATTS “Predator Week,” which will feature four brand new episodes from October 17 through 21.  The series will cover natural science concepts through storylines about predators such as great white sharks, wolves, cheetahs and raptors.
PBS KIDS’ Halloween and “Predator Week” episodes premiere on-air starting on October 17, and select full episodes and clips will be available online on PBSKIDS.org/video and PBSKIDSGO.org/video in October.

PBS Parents provides an array of Halloween resources for parents – from trick-or-treating safety tips to how to make your own Buddy (from DINOSAUR TRAIN) costume – all of which are available here: http://www.pbs.org/parents/special/halloween.html.

Through themed programming this October, PBS KIDS continues to provide content on-air and beyond that is both entertaining and educational. With a transmedia approach, PBS KIDS is increasingly serving children wherever they live, learn, and play – on TV, online, on mobile devices, in the classroom, and through a new line of educational toys.

Following is a listing of the Halloween-themed and “Predator Week” episodes airing this October (check local listings to confirm air dates and times).

NEW Halloween-Themed Episodes Images from these episodes are available on PBS PressRoom.

SID THE SCIENCE KID “Halloween Spooky Science Special” (premieres October 17) It’s Halloween time and Sid and his friends have dressed up in the spookiest and scariest costumes possible.  Sid is a bat with big fangs.  May is a spooky black cat.  Gabriela is a furry, yucky spider.  And Gerald is a super spooky skeleton that goes boo!  Susie (dressed as a silly mad scientist) loves their costumes, and helps the kids discover that Halloween can be spooky and scientific!  The kids investigate how bats are helpful creatures that catch mosquitoes, spiders are expert engineer web builders, cats are leaping aerial acrobats, and skeletons help hold up our body frames!  At the Halloween party, the kids also investigate how to make icky, gooey green slime.  Susie then ends the day with a special “Halloween Parade” song so the kids can march around and show off their spooky and scientific costumes!

DINOSAUR TRAIN “Haunted Roundhouse/Big Pond Pumpkin Patch” (premieres October 20) “Haunted Roundhouse” Dad takes the kids on a special Night Train to Troodon Town, where the Troodons have decorated their Roundhouse into a “haunted house” for a spooky party. The kids end up meeting a strange new nocturnal creature – a mammal named Vlad Volaticotherium, who was hiding in the roundhouse trying to get some sleep.

“Big Pond Pumpkin Patch” The Pteranodon family learns more about the customs of their neighbors, the Lambeosaurus family, when they are invited for the first time to accompany them to the Big Pond to celebrate “Gourd Day” – a kind of Mesozoic Halloween. The kids see their first pumpkins, and Larry Lambeosaurus even shows our family how to hollow them out and carve faces into them.

THE CAT IN THE HAT KNOWS A LOT ABOUT THAT! Two Halloween stories, “Aye Aye!” and “Trick or Treat,” premiere in October, first as parts of two separate episodes and then in encore presentations as one episode. “Sniff and Seek/Aye Aye!” (premieres October 20) “Trick or Treat/King Cecil the Seahorse” (premieres October 21) “Aye Aye!/Trick or Treat” (airs October 28) “Aye Aye!” Nick and Sally are making Halloween masks, but they want to make them really scary. Cat takes them to meet Aiya, the Aye Aye, in the forest of Spookywoowoo. Aiya shows them, that even though he may look scary - his big ears, huge eyes and long fingers help him to find food. And now Nick and Sally know just how to make their masks scary!

“Trick or Treat” It’s Halloween! The Cat in the Hat takes Sally and Nick trick or treating - his way! Around the world they go, meeting three new friends who teach them each of the tricks they do and share the treats that they like to eat. Back at home Nick and Sally are ready to go trick or treating, with plenty of new tricks to share!

WILD KRATTS “A Bat in the Brownies” (premieres October 24) When a little brown bat crash-lands into a plate of Jimmy Z’s famous brownies, Martin and Chris out set out to convince Aviva, Jimmy Z and Koki that bats are nothing to be afraid of.  With bat activated Creature Power Suits, the bros follow join their new friend on a nocturnal fly about, and the entire crew must come to the rescue when the bat colony’s roost is destroyed by a lightning bolt. In the end the Wild Kratts crew “goes batty,” as they gain a new appreciation for bat ecology, predators and insects and echolocation, and learn to love bats.

“Masked Bandits” (premieres October 25) As they prepare for a creature costume party, the Wild Kratts team begins to notice all sorts of strange things happening in the Tortuga HQ.  Jimmy is sure there is a ghost or monster living with them, but the Kratt brothers are convinced it’s some kind of creature.  When the gang sets out to discover who is causing all the trouble, they discover that certain animals gravitate towards human habitation because it provides food and protection from predators.

“Stuck on Sharks” (premieres October 17) Martin and Chris are on a mission to uncover the secret life of the mysterious Great White Shark. They use Aviva’s incredible Remora Rocketsub to "stick with" a female shark and soon learn that the giant predator of the sea actually has lots of challenges to contend with and that she could help them discover something that no one has ever seen before - the birth of Great White shark pups. But when Gourmand sniffs around looking for ingredients for his Shark Fin Soup recipe, the Wild Kratts team must help rescue their new friend.

“Mimic” (premieres October 18) While exploring why some animals mimic the looks of others, Martin and Chris encounter a cheetah cub and its mom.  But before they know it, evil fashion designer, Donita Donata, ‘cat-naps’ the startled mom right in front of their eyes.  The Wild Kratts team springs into action on a rescue mission before Donita adds the momma cheetah to her new fall line. Martin discovers that the cheetah cub has unexpected powers of mimicry, and its ability to mimic the ferocious honey badger  - is the key to foiling Donita and protecting the cheetah.

“Little Howler” (premieres October 19) Chris and Martin are unpacking from an adventure and are surprised when a Wolf pup pops out of their bags. They have no idea where the little guy came from and must retrace their steps in order to return him back to his pack.  They experience that wolves are a very social animal with a close pack structure and frequent visual and audio communication among individual members.  With this knowledge and wolf-powered Creature Power Suits the bros are able to fend off a hungry cougar and finally return the pup to his wolf pack.

“Raptor Roundup” (premieres October 20) Martin and Chris challenge themselves to ID as many hawks, eagles, owls, falcons and vultures as they can.  But the evil endangered species chef, Gaston Gourmand has his own plan for the raptors and has been capturing them all in his quest to find the tastiest bird wing.  Will the Wild Kratts team succeed in rescuing the raptors before they become Gourmand’s next gourmet delicacy?  They’ll have to use everything they know about classification and birds of prey - to round up the raptors and return them to where they belong – living free and in the wild!