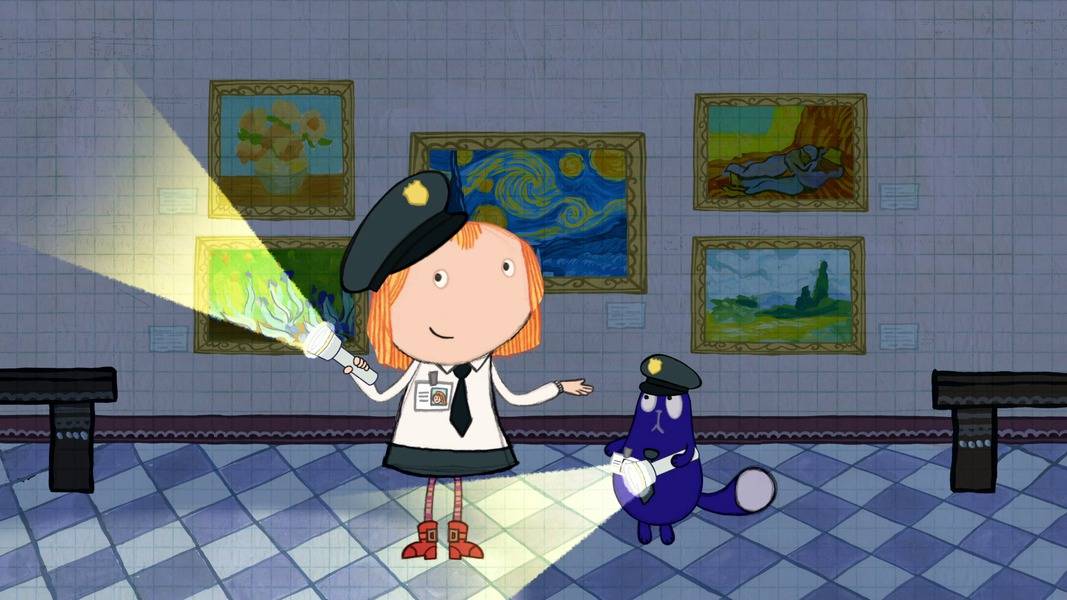 This October, the hit multiple Emmy-winning PBS KIDS series PEG + CAT from The Fred Rogers Company is getting the celebrity treatment, as American Ballet Theatre principal dancer Misty Copeland and actress Sandra Oh (Grey’s Anatomy) guest star in debut episodes. A slate of new programming from the animated preschool show kicks off on October 3 with the premiere of THE PEG + CAT MYSTERY HOUR, an all-new hour-long event. Following the special’s premiere, Copeland and Oh will lend their voices to two new episodes.

PET + CAT highlights the adventures of the fearless Peg and Cat as they use math and problem-solving skills to overcome challenges and save the day. Since its launch in 2013, PEG + CAT has provided young viewers with new ways to learn the key skills that today’s kids need to navigate everyday life.

“PEG + CAT furthers PBS KIDS’ commitment to using the power of media to help all children realize their potential,” said Lesli Rotenberg, Senior Vice President and General Manager, Children’s Media and Education, PBS. “These new episodes will help kids build important life skills, such as problem-solving and perseverance, and set a positive example for our viewers – especially girls – with the series’ signature combination of ‘girl-power’ and ‘brain-power’ and special appearances of real-life role models Misty Copeland and Sandra Oh.”

The new PEG + CAT programming will debut on PBS stations nationwide and be available on pbskids.org and the free PBS KIDS Video App, which is accessible on a variety of mobile devices and platforms such as Roku, Apple TV, Amazon Fire TV, Android TV, Xbox One and Chromecast. Games and activities from the series are also available for kids on pbskids.org; pre-school and kindergarten teachers can access classroom resources in PBS LearningMedia’s Peg + Cat Collection.

“We are so excited about introducing these special episodes of PEG + CAT to young viewers and their families nationwide,” said Paul Siefken, Vice President, Broadcast and Digital Media, The Fred Rogers Company. “You never know who Peg and Cat may encounter next as they work together to solve problems, and with both Misty Copeland and Sandra Oh joining the show as guest stars this fall, fans are in store for even more ‘totally awesome’ fun.”

“The Pentagirls Problem/The Tree Problem of National Importance” – Guest starring Sandra Oh
Premieres October 4; encores October 6; streaming October 7
Sandra Oh reprises her role as president of the United States (from the PEG AND CAT SAVE THE WORLD movie that premiered on PBS KIDS earlier this year). In the new episode, Peg and Cat travel to Washington, DC, to save the vice president, who is stuck atop a tall national monument.

“The Dance Problem/Follow the Bouncing Ball” – Guest starring Misty Copeland
Premieres October 19; encores October 21; streaming October 21
Peg and Cat plan to take the stage to dance with their idol, Misty Copeland, if Cat can overcome one challenge – his tail.

PEG + CAT is co-created and executive produced by Jennifer Oxley (Little Bill, The Wonder Pets!) and Billy Aronson (Rent, Postcards from Buster) and produced by The Fred Rogers Company for PBS KIDS. Kevin Morrison of The Fred Rogers Company and Vince Commisso of production partner 9 Story Media Group also serve as executive producers. The series is funded in part by the Corporation for Public Broadcasting (CPB), the National Science Foundation (NSF) Advancing Informal STEM Learning Program, and The Heinz Endowments.

About 9 Story Media Group
9 Story is one of the industry’s leading creators, producers and distributors of award-winning animated and live-action content for young audiences around the world. With one of North America’s largest animation studios based in Toronto, 9 Story has over 220 creative and production staff, and has produced over 900 half hours of quality children’s and family programming, seen on some of the most respected children’s channels around the world across multiple platforms. The company’s distribution arm represents a growing catalogue, which includes several beloved brands such as Arthur, Wibbly Pig, Harriet the Spy: Blog Wars, Wild Kratts and Almost Naked Animals in addition to exciting new series such as Numb Chucks,Camp Lakebottom, Cache Craze, Daniel Tiger’s Neighborhood and Nerds and Monsters. The company recently acquired CCI Kids, the family content division of CCI Entertainment, increasing 9 Story’s portfolio to over 1,600 half-hours of content with popular shows such as Guess How Much I Love You,Joe & Jack, Artzooka! and Extreme Babysitting. www.9story.com

About The Fred Rogers Company
The company was founded by Fred Rogers in 1971 as the non-profit producer of MISTER ROGERS’ NEIGHBORHOOD for PBS. In the years that followed, it not only created hundreds of episodes of this much-loved program, but also extended Fred’s values and approach to other efforts in promoting children’s social, emotional and behavioral health and supporting parents, caregivers, teachers and other professionals in their work with children. The Fred Rogers Company continues to build on Fred’s legacy in innovative ways through a wide variety of media, and engaging new generations of children and families with his timeless wisdom. The company’s highly-rated children’s TV series include DANIEL TIGER’S NEIGHBORHOOD, PEG + CAT and ODD SQUAD. For more information, visit www.fredrogers.org.

About the Corporation for Public Broadcasting
The Corporation for Public Broadcasting (CPB), a private, nonprofit corporation created by Congress in 1967, is the steward of the federal government’s investment in public broadcasting. It helps support the operations of nearly 1,500 locally owned and operated public television and radio stations nationwide. CPB is also the largest single source of funding for research, technology and program development for public radio, television and related online services. For more information, visit www.cpb.org and follow us on Twitter @CPBmedia, Facebook and LinkedIn.

About The Heinz Endowments
The Heinz Endowments support efforts to make southwestern Pennsylvania a premier place to live and work, a center for learning and educational excellence, and a region that embraces diversity and inclusion.