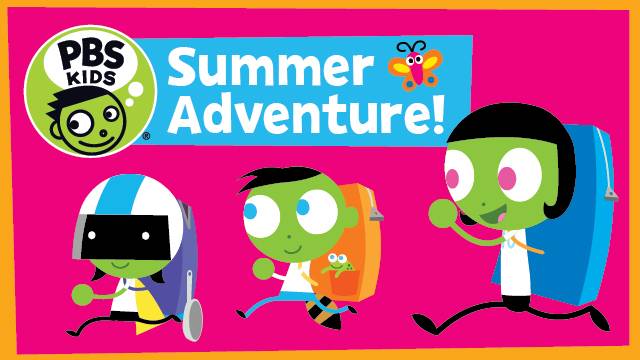 Local PBS stations across the country will bring educational resources and events to their communities through PBS KIDS partnerships with Alamo Drafthouse Cinemas, Cricket Media and Reading is Fundamental (RIF). “PBS KIDS at the Alamo” screening events will be available throughout the summer, with one hundred percent of the discounted ticket prices ($1-$5) donated to local PBS stations to support educational programming. PBS stations will also provide families with educational materials from children’s magazine publisher Cricket Media, including Click magazine and postcards to write about their favorite summer activity. And PBS KIDS is partnering with Reading is Fundamental (RIF) to encourage kids to blend hands-on learning with reading and writing to foster important literacy skills during the summer.

“We know that the summer learning gap is significant*, and we want to help kids continue learning with ideas and stories that spark their innate curiosity and get them excited for outdoor exploration throughout the summer months,” said Lesli Rotenberg, Senior Vice President and General Manager, Children’s Media and Education, PBS. “Through the PBS KIDS Summer of Adventure, we look forward to partnering with our member stations to bring free learning resources to families in communities across the country, especially to children in underserved areas who need it most.”

On digital platforms, PBS KIDS will provide parents with learning tips and ideas, DIY activities, recommended games, and downloadable resources at pbsparents.org/summer, beginning in late May. New kids activities will also be available on pbskids.org and the PBS KIDS Games app. In July, kids will have the chance to create their own Alaska-related Creature Power Suits in the popular Aviva’s Power Suit Maker game. A new game from READY JET GO! will launch in August, in which kids will help Jet and his parents discover all the amazing things about Earth as they report back to Bortron 7.

A variety of free apps for parents and kids to support summer learning include PBS KIDS Games, Nature Cat’s Great Outdoors and Ready Jet Go! Space Explorer; more information is available at pbskids.org/apps. PBS KIDS programming and content is also available for free on the PBS KIDS Video app, which can be downloaded from the App Store, Google Play and Amazon.

NATURE CAT, New One-Hour Special: OCEAN COMMOTION (guest stars Cobie Smulders as “Nature Dog")
Premiering June 19 on air and streaming platforms
Nature Cat and his pals go on an aquatic adventure to save Hal’s favorite chew toy. Along the way, they learn that all waterways are interconnected and meet up with a new special friend named Nature Dog who helps them navigate the oceans.

READY JET GO!, New One-Hour Special: BACK TO BORTRON 7
Premiering August 14 on air and streaming platforms
When Jet’s parents need to return to their home planet, Sean and Sydney join the Propulsion family on an epic adventure to Bortron 7.

Each of these special will premiere on PBS KIDS (check local listings), and will be available on the 24/7 channel and live stream on Mondays in June, July and August respectively. Encore viewings will occur during PBS KIDS’ new Family Night, on Friday, Saturday and Sunday nights throughout the summer on the PBS KIDS 24/7 channel and live stream, provided by local stations. Viewers can check their local listings for details.

As part of the PBS’ “Summer of Adventure,” WILD ALASKA LIVE, a three-part, multi-platform production that explores the must-see natural spectacle that plays out across the vast Alaskan wilderness, will be hosted by Chris and Martin Kratt of PBS KIDS’ WILD KRATTS. The family-friendly event will air on PBS stations’ primary channels, and will also be simulcast on the PBS KIDS 24/7 channel and live stream. On the 24/7 channel and live stream, WILD ALASKA LIVE will air immediately after WILD KRATTS one-hour specials, including WILD KRATTS: CREATURES OF THE DEEP SEA (on July 23) and WILD KRATTS ALASKA: HERO'S JOURNEY (on July 26 and 30).

About Wind Dancer
Wind Dancer Films created and produced such successful television series as Home Improvement and Roseanne, along with box office successes such as What Women Want and Bernie. Founded by series creators Matt Williams and David McFadzean, and later joined by principal, Dete Meserve, Wind Dancer Films has produced hundreds of hours of comedies and family projects for film and television. www.WindDancer.com