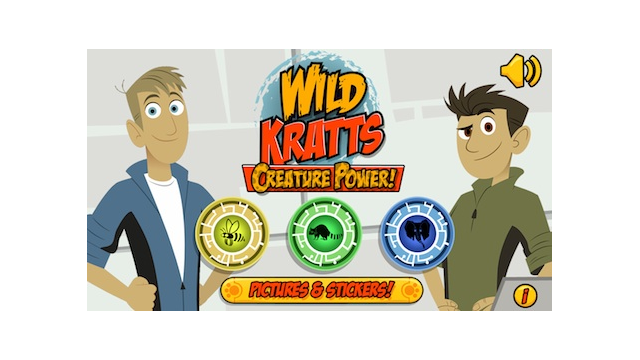 “Since its launch in 2011, WILD KRATTS has become a family favorite, both on-air and online, so we are excited to bring the series’ learning adventures to kids while they are on the go through the WILD KRATTS Creature Power App,” said Lesli Rotenberg, General Manager, Children’s Programming, PBS. “The app brings science concepts to life, giving kids the opportunity to learn about flower pollination by flying like a bee alongside Chris, help Martin keep elephants cool and comfortable by bathing them, and assist a mother raccoon in feeding her babies. These fun and educational games will not only help children build science skills, but will also nurture their enthusiasm for exploring the world around them.”

Produced by the Kratt Brothers Company, WILD KRATTS Creature Power includes three lively, immersive games that are each focused on a specific science concept. Children can collect stickers and take a picture in a Creature Power Suit as they earn high scores and learn that animals can take them anywhere in science.

“PBS is committed to innovating with media content across platforms, and providing educational and engaging mobile apps for children is a huge part of that,” said Jason Seiken, General Manager, Digital, PBS. “We have been a leader in the kids’ mobile space for the past several years and have had great success so far; in November 2012, the PBS KIDS Video App exceeded 120 million streams for the first time, representing 68 percent of our total PBS KIDS streams across all platforms for the month*.”

“Kids have been eagerly anticipating WILD KRATTS games,” said Chris Kratt, co-creator of the popular series. “In building the Creature PowerApp, we’ve emphasized many core elements of the series that are resonating so well with kids and, at the same time, are perfectly suited to interactive games.” Added co-creator Martin Kratt, “Our goal is to deliver the very best experience that each and every media platform has to offer.”

The Wild Kratts Creature Power App is available for $2.99 from the App Store on iPhone and iPod touch or at www.itunes.com/appstore.

The app was produced with financial participation from the Shaw Rocket Fund.

WILD KRATTS will dive into a special creature adventure on Monday, January 21, with the premiere of a new science special — WILD KRATTS “Lost at Sea.” During the one-hour event, Martin and Chris Kratt go underwater in two new episodes filled with humor, excitement and a whole lot of science. Kids will also be able to explore natural science with the Kratts through new science games and science videos online, and new videos on mobile.

PBS KIDS has more than 25 educational apps available for iOS and Android, designed to help kids build literacy, math, science and school readiness skills and more. With a cross-platform approach, PBS KIDS is increasingly serving children and families across America wherever they live, learn and play. More information about PBS KIDS’ apps is available on pbskids.org/mobile.

Images of the WILD KRATTS Creature PowerApp can be found on PBS PressRoom.