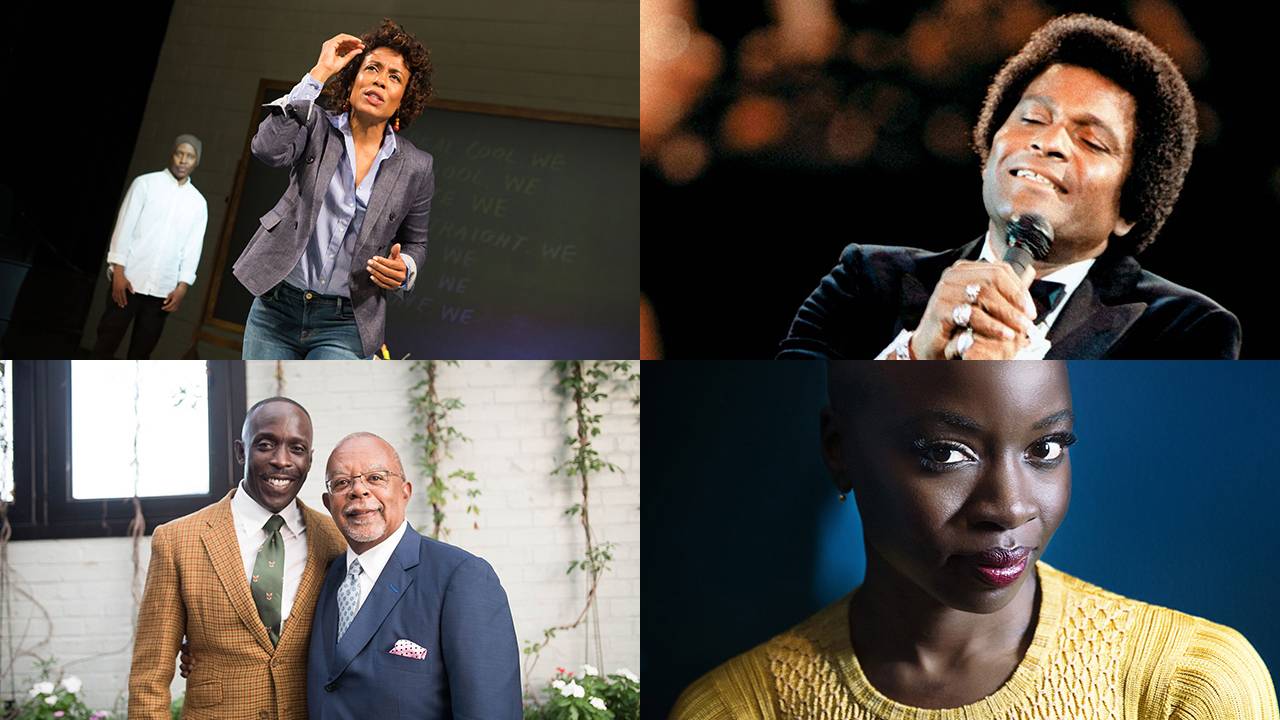 Coming in February to YouTube and Facebook Watch, SAY IT LOUD is a new PBS Digital Studios series hosted by YouTube sensations Evelyn Ngugi of “Evelyn from the Internets” and Azie Dungey, Emmy-nominated writer and creator of  “Ask a Slave.” Part cultural critique, part talk show and part history lesson, SAY IT LOUD will explore Black American culture and its impact on broader communities and trends.

Produced in partnership with KLRU-TV in Austin, Texas, the series’ will dive into the history behind cultural tropes and touch points, and focus on relatable experiences of modern Black American life, exploring media, public affairs and social media trends like #GrowingUpBlack and #BlackGirlMagic. For example, audiences can expect to see episodes that highlight things they didn’t know were invented by Black people, the meaning of Black pride and the experiences of first-generation Africans in America compared to African Americans.

See a first look of the show here. SAY IT LOUD begins streaming on YouTube on February 7, 2019.

“PBS has long had an appreciation of Black history and culture, but SAY IT LOUD is the first series developed for online audiences specifically interested in celebratory cultural content,” Brandon Arolfo, Senior Director, PBS Digital Studios said. “We’re lucky to work with this talented group of women to create a funny, authentic and enlightening series that will ignite an inspirational online community and extend the PBS Digital Studios brand to new, diverse audiences.”

Also coming in February and continuing into the spring, PBS will offer new documentaries and encore programming to spotlight those who have made significant contributions to America. From INDEPENDENT LENS documentaries exploring the various experiences of Black Americans, to AMERICAN MASTERS programs that highlight famous artists who achieved success over prejudice and injustice, to historical programs from Dr. Henry Louis Gates, Jr. and Stanley Nelson, viewers will gain a deeper understanding of African American history and culture.

“PBS always strives to produce content that will enhance our audience’s knowledge of history and culture,” said Perry Simon, PBS Chief Programming Executive and General Manager, General Audience Programming. “We are pleased to highlight the African American stories and contributions on and behind the screen in our lineup this February and beyond, and trust that the viewers will find these programs engaging and inspiring.”

These programs are available for streaming following their broadcast on all station-branded PBS platforms, including PBS.org, PBS Black Culture Connection and the PBS Video App, available on iOS, Android, Roku, Apple TV, Amazon Fire TV and Chromecast. PBS station members may be able to view episodes via Passport (contact your local PBS station for details).

The PBS Black Culture Connection (BCC), an extension of PBS.org, fosters discussion and showcases stories from across PBS that reflect the black experience in America.

The full Black History Month programming lineup is below in airdate order:

Thrill to an hour of blues and hip-hop with Buddy Guy and August Greene. Blues legend Guy plays hits and songs from his latest album, The Blues is Alive and Well. Hip-hop supergroup August Greene performs songs from its self-titled debut.

From the South to Brooklyn to China, meet the people who reproduce, consume and reclaim black memorabilia, racially-charged objects often wrapped in the protective embrace of antiquity and historical preservation. Directed by Chico Colvard.

Meet Nya, an inner-city teacher desperate to save her son, in Dominique Morisseau’s riveting and critically acclaimed new play. When her son gets in trouble at school, Nya must confront his rage and her choices, and try to reach him before he gets pulled away forever. Co-produced by BroadwayHD.

Not available for streaming

Visit the world of Hale County, Alabama. Composed of intimate and unencumbered moments in the lives of people in the community, the film offers a richly detailed glimpse at life in America’s Black Belt. Directed by RaMell Ross.

Explore the complicated history of the American South and its music through the life of country star Charley Pride. Raised in segregated Mississippi, his journey shows the ways that artistic expression can triumph over prejudice and injustice. Directed by Barbara J. Hall.

RECONSTRUCTION: AMERICA AFTER THE CIVIL WAR

Henry Louis Gates, Jr. presents the history of the transformative years following the American Civil War, when the nation struggled to rebuild itself in the face of profound loss, massive destruction and revolutionary social change.

Recently honored with a spot on the Best Documentary Feature Oscar shortlist, “Charm City” introduces a group of Baltimore citizens, police and government officials as they cope with the consequences of three years of unparalleled violence. With grit, fury and compassion, they’re trying to reclaim their city’s future. Directed by Marilyn Ness.

Streaming information not yet available.

BOSS: THE BLACK EXPERIENCE IN BUSINESS

Learn about the untold story of African American entrepreneurship, where skill, industriousness, ingenuity and sheer courage in the face of overwhelming odds provide the backbone of this nation’s economic and social growth. From acclaimed filmmaker Stanley Nelson.

Journey through the prolific life of the “I Know Why the Caged Bird Sings” author and activist who inspired generations with lyrical modern African American thought. Features new interviews with Oprah Winfrey, Common, the Clintons and others.

Growing up in Zimbabwe, actress Danai Gurira didn’t see many film and television characters who looked like her. By embracing her culture and her differences, she was able to score roles in such smash hits as Black Panther and “The Walking Dead.” She also wrote the Broadway play Eclipsed, which won critical acclaim and a Tony Award. BREAKING BIG host Carlos Watson relays Gurira’s quest to blaze a trail for more representations of African women in popular culture.

PBS LearningMedia, an online destination for educators and students, offers free access to classroom-ready resources that support lessons on black history and culture. A partnership of PBS and WGBH Educational Foundation, PBS LearningMedia provides a wide array of materials from PBS stations and partners -- including videos, images, interactives, lesson plans, articles, primary sources and more — aligned to state and national standards. Offerings include a Black History Month Collection from Georgia Public Broadcasting that addresses civil rights and cultural history; "The African Americans: Many Rivers to Cross,” which features content from Henry Louis Gates, Jr.’s series; "Basic Black," a WGBH series that highlights stories by and about African Americans; and several collections on the Civil Rights Movement. To learn more, please visit pbslearningmedia.org.

As America’s most trusted institution and number-one children’s educational media brand, PBS is committed to supporting teachers on their journey to spark students’ curiosity. PBS LearningMedia, a partnership of PBS and WGBH Educational Foundation, is an online destination that offers free access to thousands of resources from PBS stations and partners. These digital tools are designed to enhance classroom instruction -- from videos, images and interactives, to lesson plans, articles and primary sources. Available to all educators pre-K through 12th grade, PBS LearningMedia offers classroom-ready content aligned to state and national standards, compatible with the tools teachers use most, such as Google Classroom, and contextualized with supporting materials. Each month, more than one million unique users visit PBS LearningMedia to enhance teaching practice and support student learning. Learn more at pbslearningmedia.org.

PBS, with nearly 350 member stations, offers all Americans the opportunity to explore new ideas and new worlds through television and digital content. Each month, PBS reaches nearly 90 million people through television and 30 million people online, inviting them to experience the worlds of science, history, nature and public affairs; to hear diverse viewpoints; and to take front row seats to world-class drama and performances. PBS’ broad array of programs has been consistently honored by the industry’s most coveted award competitions. Teachers of children from pre-K through 12th grade turn to PBS for digital content and services that help bring classroom lessons to life. Decades of research confirms that PBS’ premier children’s media service, PBS KIDS, helps children build critical literacy, math and social-emotional skills, enabling them to find success in school and life. Delivered through member stations, PBS KIDS offers high-quality educational content on TV – including a 24/7 channel, online at pbskids.org, via an array of mobile apps and in communities across America. More information about PBS is available at www.pbs.org, one of the leading dot-org websites on the internet, or by following PBS on Twitter, Facebook or through our apps for mobile and connected devices. Specific program information and updates for press are available at pbs.org/pressroom or by following PBS Pressroom on Twitter.

For SAY IT LOUD Digital Series