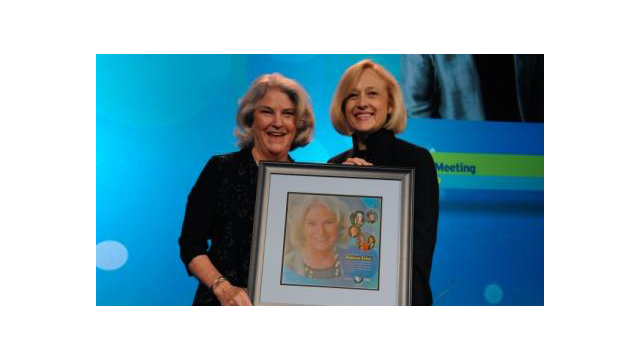 PBS Annual Meeting, Orlando, Fla., May 18, 2011 – PBS President and CEO Paula Kerger today presented the seventh annual "Be More" Award to Rebecca Eaton, award-winning executive producer of MASTERPIECE, the iconic drama series now celebrating 40 years on PBS, presented by WGBH Boston. Ms. Eaton has increased the audience for the celebrated series by 54% over last year.  Earlier this spring, Ms. Eaton was named one of TIME magazine’s 2011 100 most influential people in the world.

"We are enormously proud of Rebecca’s illustrious career creating first-rate theatrical productions and earning remarkable accolades for MASTERPIECE,” said Ms. Kerger. “She has brought to life the worlds of classic and contemporary literature for every American and transported audiences to other times and places. At a time of lowered expectations for American television, she has committed herself to the highest standards of excellence and artistic expression for public broadcasting and has shepherded in a new generation of loyal viewers.”

Since taking over the helm of the PBS series MASTERPIECE THEATRE and MYSTERY! in 1985, Ms. Eaton has been responsible for such high-profile titles as Prime Suspect, Bleak House, The Lost Prince, Inspector Morse, Miss Marple, Tony Hillerman’s Skinwalkers, Coyote Waits, and A Thief of Time, The Complete Jane Austen, Cranford, Wallander, Little Dorrit, and the recent hits Sherlock, Downton Abbey, and Upstairs Downstairs. She has accrued a bookcase of honors, including 31 Primetime Emmy Awards (seven in 2009 for Little Dorrit), fifteen Peabody Awards, a Golden Globe, and two Academy Award nominations for the MASTERPIECE co-production, Mrs. Brown. In 2008, she oversaw the highly successful launch of the new MASTERPIECE, drawing in a new generation of drama fans, and at the same time increased the size of the series’ core audience. Rebecca Eaton’s distinguished career has earned her the official recognition of Queen Elizabeth II with an honorary OBE (Officer, Order of the British Empire).

The PBS "Be More" Award is an annual award created to recognize extraordinary individuals who inspire public television viewers to expand their horizons, to experience growth and adventure, to explore new ideas and to be more. Based on PBS' award-winning “Be more” brand campaign, the award’s previous recipients are Ken Burns, Joan Ganz Cooney, Jim Lehrer, Bill Moyers, Fred Rogers, and Neil deGrasse Tyson.

About MASTERPIECE and WGBH Boston

MASTERPIECE, celebrating its 40th anniversary in 2011, is presented on PBS by WGBH Boston. Rebecca Eaton is executive producer. Funding for the series is provided by public television viewers with additional support from contributors to The MASTERPIECE Trust, created to help ensure the series future. WGBH Boston is America’s preeminent public broadcaster, producing such celebrated national PBS series as Masterpiece, Antiques Roadshow, Frontline, Nova, American Experience, Arthur, Curious George and more than a dozen other award-winning primetime, lifestyle and children’s series.