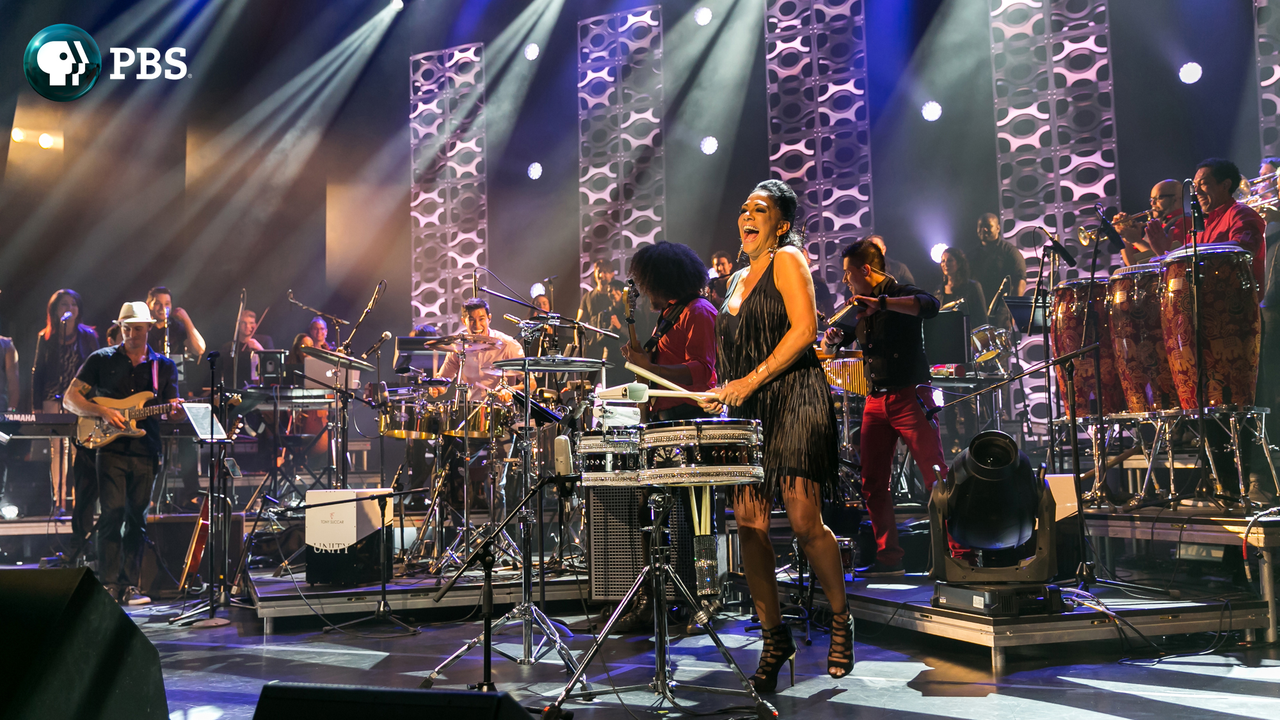 ARLINGTON, VA – August 31, 2015 – In honor of Hispanic Heritage Month and as part of its commitment to celebrating the diversity of our nation year-round, PBS today announced an on-air lineup commemorating the unique experiences and culture of Hispanic Americans that have shaped Latino – and American – history. With fascinating documentaries, new and encore episodes from popular titles, and the 28th ANNUAL HISPANIC HERITAGE AWARDS, PBS’ programs will enrich viewers’ understanding of Hispanic Americans with an in-depth look at the stories, music, and issues that have impacted, and continue to influence, Latino history and culture (click here for a clip).

“PBS is committed to exploring diversity reflective of many cultures, generations and genres in all of its programming,” said Beth Hoppe, Chief Programming Executive and General Manager of General Audience Programming for PBS. “We always strive to tell the stories of diverse America, and our programming throughout Hispanic Heritage Month (September 15-October 15) and beyond highlights the unique contributions and experiences of Hispanic Americans.”

The fifth season of the PBS ARTS FALL FESTIVAL (click here for a clip), hosted by Grammy Award-winning international music superstar Gloria Estefan, features two vibrant shows with a Latin flair. The festival will launch on October 9 with the inventive, high-energy UNITY – THE LATIN TRIBUTE TO MICHAEL JACKSON, featuring Latin-infused arrangements of iconic songs such as “Smooth Criminal,” “I Want You Back” and “Billie Jean” in this concert special hosted by Sheila E, featuring award-winning Latin artists. On November 9, celebrated Broadway star Chita Rivera, fresh off of her recent Tony-nominated Broadway run, is featured in GREAT PERFORMANCES “Chita Rivera: A Lot of Livin’ to Do.”

Following UNITY – THE LATIN TRIBUTE TO MICHAEL JACKSONon October 9 will be the 28th ANNUAL HISPANIC HERITAGE AWARDS (check local listings). The legendary Rita Moreno will host this special evening, which is the country’s highest award paying tribute to Latinos by Latinos. The evening includes live performances and appearances by some of the country’s most celebrated Hispanic artists. The Hispanic Heritage Awards were created by the White House in 1987.

PBS also presents new documentaries that focus on the history and lives of Hispanic Americans. ON TWO FRONTS: LATINOS & VIETNAM,airing September 22, examines the Latino experience during the Vietnam War from the point of view of two siblings, Everett and Delia Alvarez, who stood on opposite sides of the war, one as a POW and the other protesting at home. On September 18, in a special co-presentation with VOCES, AMERICAN MASTERS “Pedro E. Guerrero: A Photographer’s Journey” depicts the life and work of internationally recognized Mexican-American architectural photographer Pedro E. Guerrero; and on September 21, award-winning series POV presents “Don’t Tell Anyone” (“No Le Digas a Nadie”), whichprofiles immigrant activist Angy Rivera as she shares her experiences of being undocumented and sexually abused.

In addition, select PBS stations will feature encore broadcasts of REBEL: A VOCES SPECIAL PRESENTATION, which tells the story of Loreta Velasquez, a Cuban immigrant who secretly fought for the Confederacy during the Civil War; “The State of Arizona,” a provocative INDEPENDENT LENS film about Arizona’s controversial “papers please law”; and the landmark series LATINO AMERICANS, hosted by Peruvian-American actor Benjamin Bratt.

PBS.org features a Hispanic Heritage Month Online Collection to connect viewers to new programs premiering this fall and to the additional films and digital features that remain on the site year-round, highlighting the stories, people, history and culture of Hispanic Americans.

PBS LearningMedia, a free on-demand library for educators and students, with more than 1.6 million registered users, will feature a variety of digital resources from VOCES “Children of Giant,”VOCES “El Poeta,” AMERICAN MASTERS “Pedro E. Guerrero: A Photographer’s Journey” and ON TWO FRONTS: LATINOS & VIETNAM for classroom use. The service currently offers more than 1,300 Spanish-language videos, available for anytime access, that span a wide range of subjects, with a focus on science, technology, engineering and math (STEM). A special video about the importance of Hispanic Heritage month will launch on September 2nd. For more information please visit www.pbslearningmedia.org.

POV “Don’t Tell Anyone” (“No Le Digas a Nadie”)
Meet immigrant activist Angy Rivera, the country’s only advice columnist for undocumented youth. In a community where silence is often seen as necessary for survival, she steps out of the shadows to share her own parallel experiences of being undocumented and sexually abused. -- Monday, September 21, 10:00–11:30 p.m. ET

ON TWO FRONTS – LATINOS & VIETNAM
Examine the Latino experience during a war that placed its heaviest burden on the working class. Framing the documentary are memoirs of two siblings who stood on opposite sides of the Vietnam War, one a POW and the other a protestor at home. -- Tuesday, September 22, 10:00– 11:30 p.m. ET

PBS ARTS FALL FESTIVAL: UNITY– THE LATIN TRIBUTE TO MICHAEL JACKSON
World-class drummer and percussionist Sheila E. hosts a concert special that showcases award-winning Latin artists and a 37-piece orchestra performing Latin-infused arrangements of the songs on Tony Succar’s album Unity: The Latin Tribute to Michael Jackson. The concert features 10 classic songs from the hit 12-track album, such as “Smooth Criminal,” “I Want You Back” and “Billie Jean” re-imagined by musicians from all over Latin America. On its release in April 2015, the album topped the Amazon Latin World Music Charts, the iTunes World Music Charts and the Billboard Tropical Charts at #1. Produced by Unity Entertainment Corporation and Oregon Public Broadcasting in association with Universal Music Classics. -- Friday, October 9, 9:00–10:00 p.m. ET

PBS ARTS FALL FESTIVAL: GREAT PERFORMANCES “Chita Rivera: A Lot of Livin’ to Do”
Legendary Broadway performer Chita Rivera has been lighting up international stages for more than 70 years. With starring roles in such iconic Broadway shows as West Side Story, Bye Bye Birdie and Chicago, Rivera returned to Broadway in 2015 to star in the final John Kander/Fred Ebb/Terrence McNally musical The Visit. In addition to archival clips from Rivera’s many shows and TV appearances, this career retrospective also features interviews with Dick Van Dyke, Ben Vereen, Carol Lawrence and many more to tell the story of Rivera’s peerless show biz virtuosity. -- Friday, November 6, 9:00 –10:00 p.m. ET

REBEL: VOCES SPECIAL PRESENTATION
Explore the mysterious true story of Loreta Velasquez, a Cuban immigrant who was one of the estimated 1,000 women who secretly served as soldiers during the Civil War. Why has her story been erased from the history books?
September 2015 (check local listings)

“Now en Español”
Explore the ups and downs of being a Latina actress in Hollywood through the lives of the five dynamic women who dub “Desperate Housewives” into Spanish for American audiences.
September 2015 (check local listings)

“El Poeta”
Meet renowned Mexican poet Javier Sicilia, who ignited an international movement for peace after the brutal murder of his 24 year-old son — collateral damage in a drug war that has left more than 70,000 dead since 2006.
September 2015 (check local listings)

LATINO AMERICANS
Join narrator Benjamin Bratt for a documentary series that chronicles the rich and varied history of Latinos, who have for the past 500-plus years helped shape what is today the United States and have become the country’s largest minority group.

“Foreigners in Their Own Land”
Survey the history and people from 1565-1880, as the first Spanish explorers enter North America, the U.S. expands into territories in the Southwest and as the Mexican-American War strips Mexico of half its territories by 1848.
September 2015 (check local listings)

“Empire of Dreams”
See how the American population is reshaped by Latino immigration starting in 1880 and continuing into the 1940s: Cubans, Mexicans and Puerto Ricans begin arriving in the U.S. and start to build communities in South Florida, Los Angeles and New York.
September 2015 (check local listings)

“War and Peace”
Trace the World War II years and those that follow, as Latino Americans serve their new country by the hundreds of thousands — yet still face discrimination and a fight for civil rights in the United States.
September 2015 (check local listings)

“Prejudice and Pride”
Witness the creation of the proud “Chicano” identity as labor leaders organize farm workers in California, and as activists push for better education opportunities for Latinos, the inclusion of Latino studies and empowerment in t he political process.
September 2015 (check local listings)

“Peril and Promise”
Examine the past 30 years, as immigration creates a debate over the undocumented that leads to calls for tightened borders and English-only laws. Simultaneously, Latino influence is booming in business, sports, media, politics and entertainment.
September 2015 (check local listings)

PBS, with over 350 member stations, offers all Americans the opportunity to explore new ideas and new worlds through television and online content. Each month, PBS reaches more than 103 million people through television and over 33 million people online, inviting them to experience the worlds of science, history, nature and public affairs; to hear diverse viewpoints; and to take front row seats to world-class drama and performances. PBS’ broad array of programs has been consistently honored by the industry’s most coveted award competitions. Teachers of children from pre-K through 12th  grade turn to PBS for digital content and services that help bring classroom lessons to life. PBS’ premier children’s TV programming and its website, pbskids.org, are parents’ and teachers’ most trusted partners in inspiring and nurturing curiosity and love of learning in children. More information about PBS is available at www.pbs.org, one of the leading dot-org websites on the Internet, or by following PBS on Twitter, Facebook or through our apps for mobile devices. Specific program information and updates for press are available at pbs.org/pressroom or by following PBS Pressroom on Twitter.