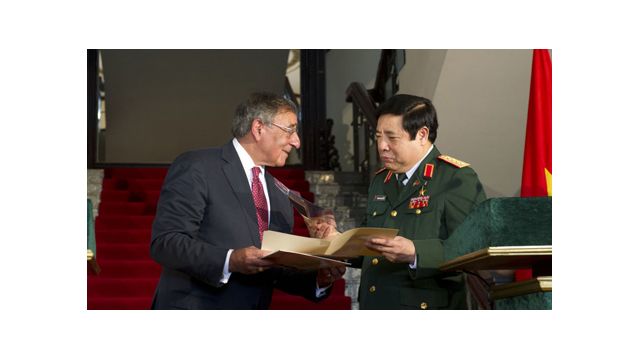 ARLINGTON, VA, June 4, 2012 – U.S. Defense Secretary Leon Panetta exchanged profoundly personal documents with Vietnam’s defense minister at their meeting in Hanoi today, Monday, June 4. Panetta brought with him a diary recovered from the body of a North Vietnamese soldier killed in a 1966 firefight near Quang Ngai.

The PBS series HISTORY DETECTIVES provided the diary to Secretary Panetta as part of its search for the personal story behind the diary.

“Our commitment to the effort to have an accounting of the efforts of both sides that were involved in the war, I think, is critical to our personnel today,” said Secretary Panetta, “to make it clear that we stand by our pledge to leave no one behind.”

The diary includes several entries and a photograph of two young women. History Detective Wes Cowan and other researchers for HISTORY DETECTIVES translated the diary and embarked on an investigation to identify the young women in the photograph and return the diary to the soldier’s family.

"I'm pleased that HISTORY DETECTIVES could, through Secretary Panetta, be part of a continuing process of reconciliation between our nations.  The diary and photograph are small reminders that the combatants who were lost on both sides were not simply warriors, but real people who will forever be remembered by their loved ones," said Wes Cowan, lead investigator for HISTORY DETECTIVES.

Marjorie Garner brought the diary to HISTORY DETECTIVES for her friend, U.S. Marine Robert “Ira” Frazure. After firing subsided in that 1966 battle, known as Operation Indiana, Frazure found the body of a North Vietnamese soldier in a machine gun pit; a small red diary lay on his chest.

Frazure has held onto the diary for 46 years, with mixed emotions. He hopes HISTORY DETECTIVES can help him return the diary to the soldier’s family.

“We are grateful for the help of the PBS HISTORY DETECTIVES research team providing the diary to us for this exchange,” said Pentagon Press Secretary George Little.

To mirror this contribution, Vietnam Minister of Defense, General Thanh, turned over to Secretary Panetta several letters from a U.S. soldier killed in the Vietnam War. Panetta hopes to deliver these letters to that American soldier’s family members, who now live in California.

PBS HISTORY DETECTIVES will air the moving results of the investigation, and their collaboration with the Department of Defense, on Tuesday, September 25, 2012, 8:00 p.m. ET on PBS.

HISTORY DETECTIVES explores our nation’s past by uncovering the captivating history behind personal items that have puzzled their owners for years. The detectives discover the stories behind these artifacts and reveal the connections to defining events in America’s past. HISTORY DETECTIVES is produced by Oregon Pubic Broadcasting and Lion Television.