PBS Focuses on Issues Behind the Newtown Shooting 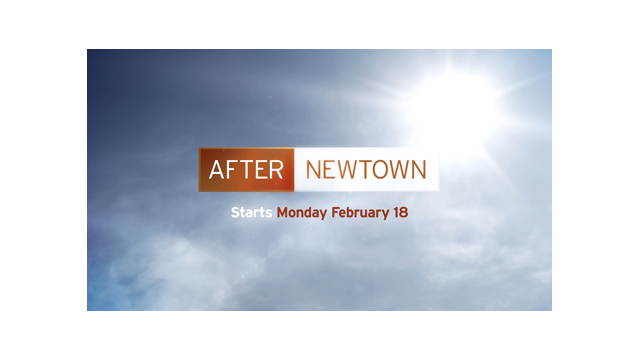 ARLINGTON, VA; February 14, 2012 – PBS announced today the details of a weeklong exploration into the issues related to the shootings in Newtown, Conn., that airs February 18-22. The specials harness the wealth of PBS producers’ content expertise to shed light on December’s tragic events.

Programming during the week will include nightly news reports from PBS NEWSHOUR, a special collaboration between FRONTLINE and The Hartford Courant, a science-based investigation on NOVA, analysis of the issues on WASHINGTON WEEK, a human interest report on NEED TO KNOW and two independent documentaries.

“This week of specials gives PBS the opportunity to take an in-depth and thoughtful look at the issues the Newtown tragedy laid bare,” said Beth Hoppe, Chief Programming Executive and General Manager of General Audience Programming for PBS. “This collaboration between science, documentary and public affairs producers and partners will offer an unprecedented exploration of the many topics surrounding this tragedy, including gun violence, gun laws, mental health support and school safety.”

Visit the PBS YouTube channel for a sneak peek of these specials. The latest details about the PBS “After Newtown" Initiative include:

AFTER NEWTOWN: GUNS IN AMERICA is an unprecedented exploration of America’s enduring relationship with firearms. From the first European settlements in the New World to frontier justice; from 19th-century immigrant riots to gangland violence in the Roaring Twenties; from the Civil War to civil rights, guns have been at the center of our national narrative. Americans have relied on guns to sustain communities, challenge authority, and keep the peace. Efforts to curtail their distribution and ownership have triggered epic political battles. This program traces the evolution of guns in America, their frequent links to violence and the clash of cultures that reflect competing visions of our national identity.

In the wake of the mass killings at Sandy Hook Elementary School, FRONTLINE investigates a young man and the town he changed forever.  Adam Lanza’s motives, and his life, remain largely a mystery. With The Hartford Courant, FRONTLINE looks for answers to the central — and so far elusive — question: Who was Adam Lanza?  Also this hour: In the aftermath of the tragedy, President Obama called for a national conversation about guns. Nowhere is that conversation more intense than in Newtown, where FRONTLINE finds a town divided and explores how those closest to the tragedy are wrestling with our nation’s gun culture and laws.

What makes a person walk into a theater, or church, or classroom and open fire? What combination of circumstances compels a human being to commit the most inhuman of crimes? As the nation tries to comprehend the tragic events in Newtown, NOVA correspondent Miles O’Brien investigates theories into what drives rampage killers. Could suicide — and the desire to go out in a media-fueled blaze of glory — be their main motivation?  How much can science tell us about a brain at risk for violence?  Most important, can we recognize dangerous minds in time to stop the next Newtown?

Psychologists, working with law enforcement officers, have devised tools to prevent violent attacks. THE PATH TO VIOLENCE details a powerfully effective Secret Service program — the Safe School Initiative — that has helped schools detect problem behavior.  However, shooters like Adam Lanza, Jared Loughner and allegedly James Holmes all executed their attacks after they’d left school. Can the gains made by psychologists and law enforcement be extended to encompass parents — terrified of their own children and inadequately helped by mental health and legal systems — and families of violent individuals?  Is the country ready for a national conversation about the balance between school safety and civil liberties that interventions, including gun control, require?

The damage done by the massacre of more than two dozen children and adults in Newtown, Conn. last December no doubt will reverberate for years. But much smaller shooting incidents that get little media attention also have profound consequences. One such incident occurred exactly 20 years before Newtown. At a small college in western Massachusetts, a disturbed student went on a shooting rampage and killed two people. Even today, the families of those victims and survivors of that incident are still trying to come to terms with what happened that day. Maria Hinojosa reports.

Each newscast will include a segment exploring issues surrounding the Newtown tragedy.

In addition to this special week of programming, PBS NEWSHOUR will provide ongoing analysis, insights and panel discussions on the policy and political debates coming out of the Newtown tragedy, the Biden task force proposals, and the President’s State of the Union address on February 12.