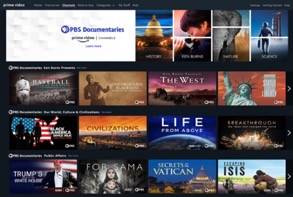 For 50 years, PBS has been America’s trusted home for documentaries. The PBS Documentaries Prime Video Channel is another way for curious viewers to access PBS content outside the PBS Video App. The PBS Documentaries Prime Video Channel will include a robust library of critically acclaimed, thought-provoking programs including the entire Ken Burns collection as well as films from NOVA, FRONTLINE, AMERICAN MASTERS, NATURE, AMERICAN EXPERIENCE, INDEPENDENT LENS, POV and many independent producers. Subscribers will be able to explore various topics or take an in-depth look at the people, traditions and events that mold our world—all carefully curated for “viewers like you” by America’s most trusted home of documentaries: PBS.

“PBS is the leader of high-quality, compelling nonfiction entertainment, and the PBS Documentaries Prime Video Channel is a natural addition to our current streaming offering on Prime Video Channels—PBS MASTERPIECE, PBS LIVING AND PBS KIDS.  This channel will not only help bring engaging stories about life in all corners of our country to a new audience, it will provide needed revenues to sustain public broadcasting’s public-private partnership model for the benefit of all stations and the communities they serve,” says Andrea Downing, Co-President of PBS Distribution.

“We had long hoped to be able to have all of our films available in one place so the public would have access to the body of work,” says Ken Burns. “We’re thrilled that this is now possible thanks to the efforts of PBS Distribution and Amazon to launch the PBS Documentaries Prime Video Channel and also through PBS’s Passport initiative that allows viewers to support their public television stations.  Both will also contribute to the larger mission of PBS.”

“FRONTLINE was founded on the belief that longform documentaries could inform, educate and inspire public television’s audiences — and during these historic times, deeply reported and easily accessible journalism is invaluable,” says FRONTLINE Executive Producer Raney Aronson-Rath. “Through this new Channel, we’re excited to see our documentaries reach new and existing streaming audiences.”

At launch, the channel will feature nearly 1,000 hours of award-winning programming for subscribers to enjoy, including Ken Burns’s landmark series THE CIVIL WAR and COUNTRY MUSIC, Stanley Nelson’s THE BLACK PANTHERS: VANGUARD OF THE REVOLUTION, and Academy Award-Nominated films like FRONTLINE “For Sama” and AMERICAN EXPERIENCE “Last Days in Vietnam.”

Stanley Nelson comments, “I’m thrilled to see that my work will find a new home on this channel. PBS has become a premier destination for documentary programming in the U.S. and has been hugely invested in giving films by diverse storytellers and emerging filmmakers much-needed national exposure. I’m so glad that my film on the Black Panther Party, which can inform communities in our current historical moment, will be able to reach different audiences on this new service.”

About PBS Documentaries Prime Video Channel
The PBS Documentaries Prime Video Channel is a subscription video on demand channel exclusive to Amazon launching August 2020. This new streaming channel will feature nearly 900 hours of the highest quality factual programming, including the full catalog of films from Ken Burns and award-winning documentaries from NOVA, FRONTLINE, AMERICAN MASTERS, NATURE and AMERICAN EXPERIENCE, in addition to programming from other independent producers.

PBS Distribution offers consumers and educators the highest quality factual, scripted and children’s programming, including films from producer Ken Burns, hit dramas from PBS MASTERPIECE, entertaining and educational children’s series and award-winning documentaries from NOVA, FRONTLINE, AMERICAN MASTERS, NATURE, AMERICAN EXPERIENCE and many independent producers. For over 20 years, the company has extended the reach of programming beyond broadcast while generating revenue for the public television system stations and producers.

About PBS
PBS, with more than 330 member stations, offers all Americans the opportunity to explore new ideas and new worlds through television and digital content. Each month, PBS reaches over 120 million people through television and 26 million people online, inviting them to experience the worlds of science, history, nature and public affairs; to hear diverse viewpoints; and to take front row seats to world-class drama and performances. PBS’ broad array of programs has been consistently honored by the industry’s most coveted award competitions. Teachers of children from pre-K through 12th grade turn to PBS for digital content and services that help bring classroom lessons to life. Decades of research confirms that PBS’ premier children’s media service, PBS KIDS, helps children build critical literacy, math and social-emotional skills, enabling them to find success in school and life. Delivered through member stations, PBS KIDS offers high-quality educational content on TV – including a 24/7 channel, online at pbskids.org, via an array of mobile apps and in communities across America. More information about PBS is available at www.pbs.org, one of the leading dot-org websites on the internet, or by following PBS on Twitter, Facebook or through our apps for mobile and connected devices. Specific program information and updates for press are available at pbs.org/pressroom or by following PBS Pressroom on Twitter