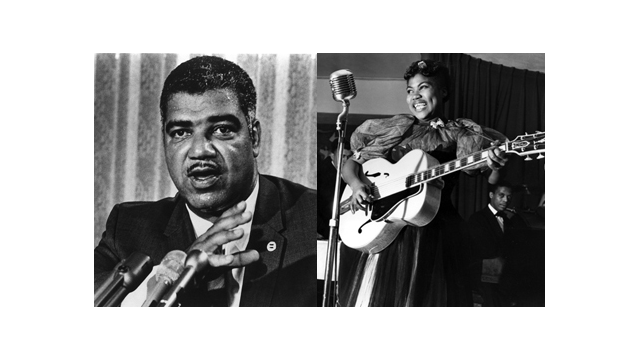 ARLINGTON, VA – January 28, 2013 – In celebration of Black History Month and as part of its year-round commitment to diverse programming, PBS today announced an on-air lineup commemorating the contributions of African Americans in music, dance, television and civil rights, providing an in-depth look at key figures and events that shaped black — and American — history. In addition to these programs, PBS announced it will launch the PBS Black Culture Connection, a digital storybook of black films, history, trends and discussion that’s available throughout the year on PBS.org, on February 1, 2013. A video showcasing the PBS Black History Month programming schedule and PBS Black Culture Connection is available to view or embedhere.

“PBS’ mission is clear — to provide accessible, educational, informative programs of every genre and culture all year long. Since February is Black History Month, our schedule is heavily focused on the contributions of African Americans,” said Donald Thoms, Vice President, Programming. “During the month, we are also continuing our commitment to feature stories and films from diverse and independent producers, which remains a staple of our content offerings year round.”

The PBS Black Culture Connection, featuring video from films, award-winning documentaries and popular series like AMERICAN EXPERIENCE and FRONTLINE, will link the diverse national content found on PBS with local programs, interviews and discussions from PBS member stations and from around the web. In addition to aggregating more than 100 digital resources about black history and culture in one place within PBS.org, the PBS Black Culture Connection will feature thematic film collections, biographies and profiles, original productions made just for the web and local station spotlights. After exploring the site, users are encouraged to connect with others through online discussion and to challenge themselves with a suite of quizzes.

“The PBS Black Culture Connection is a digital resource that unites a diverse collection of films and other content across PBS. It's a screening room for award-winning documentaries and films, a forum to engage in meaningful discussions, and a library to explore hundreds of videos, articles, quizzes and resources like historical maps and timelines,” said Jason Seiken, PBS SVP and General Manager, Digital.

The PBS Black Culture Connection is made available through partnerships with member stations including WNET and WGBH and public media partners like the National Black Programming Consortium. It will also feature the works of producers like Henry Louis Gates, Jr., Stanley Nelson and Tavis Smiley.

The full Black History Month programming lineup is included below. Most films listed will also be available via streaming video on the PBS Black Culture Connection.

LIFECASTERS, premiering Thursday, February 7, 2013, 9:00-10:00 p.m. ET (check local listings), unites fiction and documentary filmmakers to tell stories of Americans who use their strength, creativity and determination to reach their goals — a bit later in life. In one segment, Oscar-nominees Steven Bognar and Julia Reichert observe African-American dancer Sherri “Sparkle” Williams, one of the oldest female professional dancers still practicing in the U.S.

Whitney M. Young, Jr. was one of the most celebrated — and controversial — leaders of the civil rights era. In INDEPENDENT LENS “The Powerbroker: Whitney Young’s Fight for Civil Rights,” premiering Monday, February 18, 10:00-11:00 p.m. ET, follow his journey from segregated Kentucky to head of the National Urban League. Unique among black leaders, Young took the fight directly to the powerful white elite, gaining allies in business and government, including three presidents. He had the difficult tasks of calming the fears of white allies, relieving the doubts of fellow civil rights leaders and responding to attacks from the militant Black Power movement.

InAMERICAN MASTERS “Sister Rosetta Tharpe: The Godmother of Rock & Roll,” premiering Friday, February 22, 2013, 9:00-10:00 p.m. ET, discover the life, music and influence of African-American gospel singer and guitar virtuoso Sister Rosetta Tharpe (1915-1973). Southern-born, Chicago-raised and New York-made, “She could play the guitar like nobody else … nobody.” During the 1940s-60s, Sister Rosetta introduced the spiritual passion of her gospel music into the secular world of rock ’n’ roll, inspiring the male icons of the genre. One of the most influential musicians of the 20th century, Tharpe may not be a household name today, but the flamboyant superstar, with her spectacular playing on the newly electrified guitar, had a major influence on black musicians, including Chuck Berry, Little Richard, Isaac Hayes and Etta James, and also on white stars such as Elvis Presley, Johnny Cash, Jerry Lee Lewis and Carl Perkins.

In MAKERS: WOMEN WHO MAKE AMERICA, a PBS film about the modern American Women’s Movement, premiering Tuesday, February 26, 2013, 8:00-11:00 p.m. ET, one segment explores stories of how 1960s Civil Rights leaders helped inspire the pioneers of the modern American Women’s Movement. MAKERS details how the parallel movements steadily made gains after initially being cast together with the passage of the 1964 Civil Rights Act. In addition, the film tells the stories of many groundbreaking African-American women, such as Barbara Smith, who started Kitchen Table: Women of Color Press to give women inroads into publishing, civil rights activist Diane Nash, and Yale-educated lawyer Eleanor Holmes Norton, a civil rights veteran who now serves in the House of Representatives. The documentary builds on an unprecedented multi-platform video experience from PBS and AOL: MAKERS.com

Gwen Ifill interviews Berry Gordy, founder in 1959 of Motown Records, which became the most successful African-American-owned enterprise in the United States, in AN EVENING WITH BERRY GORDY, airing in February 2013 (check local listings). Gordy’s celebrated life as entrepreneur, songwriter, record producer, movie director and producer has left an indelible influence on music and films nationally and internationally. Performing one tribute song from Gordy’s musical career, representing the old and new school Motown, are Valerie Simpson (Ashford & Simpson) and R&B musician KEM. Gordy’s son, Stefan Gordy — known to the music world as Redfoo — one-half of the hip-hop musical group, LMFAO, will be in attendance.

SLAVERY BY ANOTHER NAME Friday, February 22, 2013, 10:00-11:30 p.m. ET Explore the story of labor practices and laws that effectively created a new form of slavery in the South. Laurence Fishburne narrates.