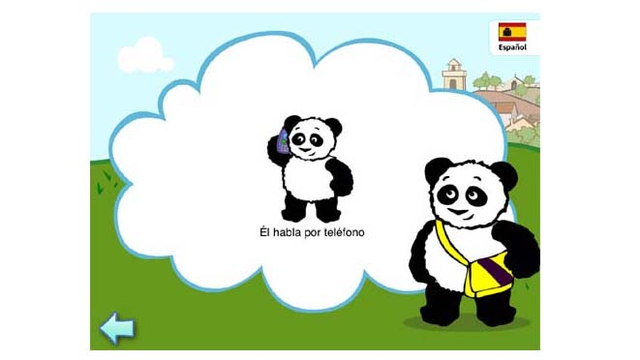 “We know from research that the early years in a child’s development are an ideal time to introduce a foreign language, so it was important to us to create a language learning app for preschool-age kids,” said Lesli Rotenberg, Senior Vice President, Children’s Media, PBS. “LITTLE PIM SPANISH was designed specifically to introduce the Spanish language to young kids at this stage, when their brains are the most receptive to the sounds of different languages.”

“LITTLE PIM SPANISH is our first Spanish language learning app, which is something that parents have been asking us to develop,” said Jason Seiken, Senior Vice President, Interactive, Product Development, and Innovation, PBS.  “Our PBS KIDS apps have been downloaded more than one million times to date, and we expect that number to continue to grow with the introduction of this new app that we know is so in demand.”

LITTLE PIM SPANISH is based on LITTLE PIM, an award-winning foreign-language teaching DVD series. The app helps young children develop basic Spanish vocabulary through three interactive games: “Eating and Drinking,” “Playtime” and “Wake up Smiling.”  With three levels of play in each game, the app introduces a total of 60 vocabulary words, including nouns, verbs and short phrases.  At each level, the game presents vocabulary words and phrases both visually and aurally, then provides activities that help players acquire the vocabulary, and lastly validates and reinforces newly acquired knowledge.

The LITTLE PIM SPANISH App is available for $2.99 from the App Store on iPad or at www.itunes.com/appstore.

To learn about all PBS KIDS apps, visit PBSKIDS.org/mobile.

Images of the LITTLE PIM SPANISH App can be found on PBS PressRoom.

LITTLE PIM SPANISH is the latest addition to the PBS KIDS lineup of educational mobile content, joining other successful apps such as the PBS KIDS Video for iPad App and the SUPER WHY App.  With a transmedia approach, PBS KIDS is increasingly serving children wherever they live, learn, and play – through mobile devices, as well as on TV, online, in the classroom, and through a new line of educational toys.

LITTLE PIM is the award-winning language direct-to-DVD series that makes it easy and fun to introduce young children to a foreign language at the age when they learn best.  Using the Entertainment Immersion MethodTM, LITTLE PIM uses a combination of live action segments with animation of Little Pim the panda, the series’ lovable teacher. The method’s strategic use of repetition and building blocks of vocabulary guide young children through an easy, fun way to learn their first concepts in a second language. LITTLE PIM was designed specifically for babies, toddlers and preschoolers.  Research proves that children who learn a second language also tend to have stronger verbal, cognitive and analytical skills. LITTLE PIM was developed by Julia Pimsleur Levine, daughter of the renowned language teaching pioneer, Dr. Paul Pimsleur, in consultation with Dr. April Benasich, a leading neuroscientist.