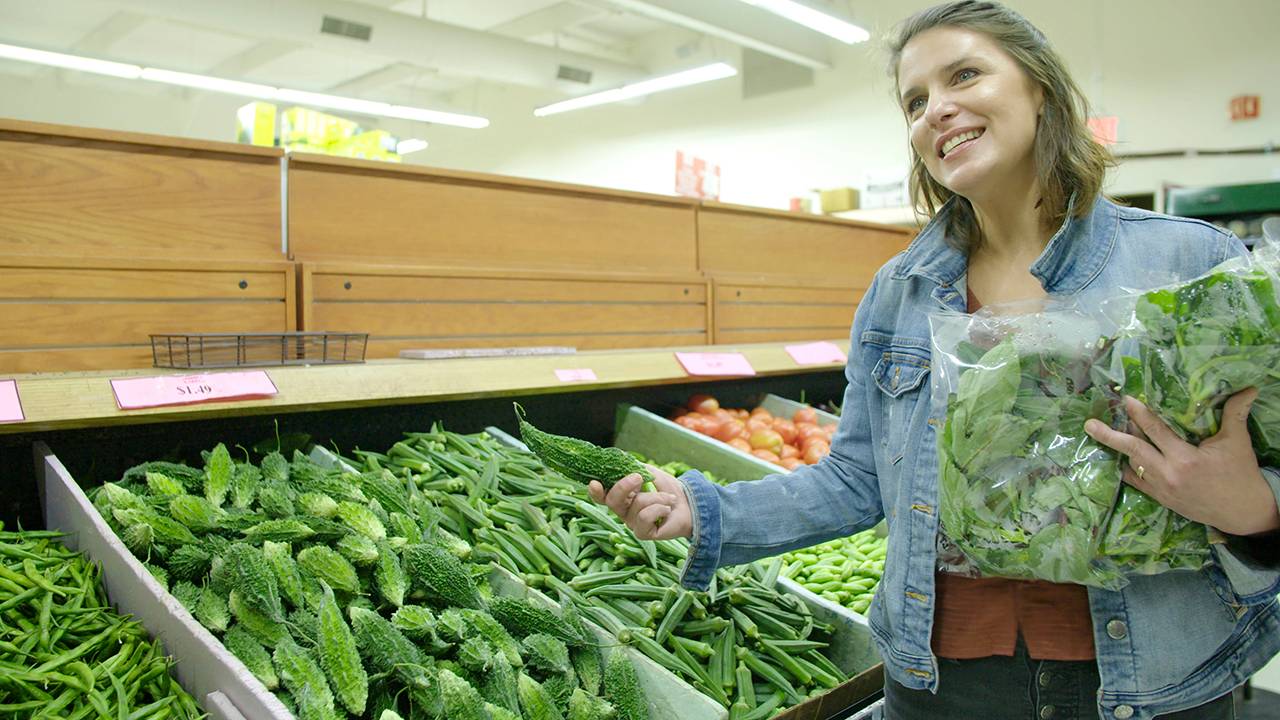 The six-part series, slated for the Winter/Spring 2020 season, delves into the people and dishes defining the New American South

ARLINGTON, VA and DURHAM, NC; JULY 12, 2019 -- Celebrity chef, author and restaurateur Vivian Howard, who previously hosted the award-winning series A CHEF’S LIFE, returns to PBS in SOMEWHERE SOUTH. The new six-part series is a culinary tour, exploring dishes that are uniting cultures and creating new traditions across the American South.

In SOMEWHERE SOUTH, premiering on PBS in Winter/Spring 2020, Vivian travels the changing South in search of the dishes that connect us all — dumplings, hand pies, porridge and more — but which are expressed in delightfully different ways across cultures. Along the way, she meets new friends and teachers, and as she says, discovers “how breaking bread and sharing a meal can create a comfortable place to have meaningful, memorable conversations.”

“Shooting SOMEWHERE SOUTH has made me look at what we call Southern food with a new set of spectacles. The home kitchens I learn in, the stories I hear people share, the food I watch them make — it has lit a fresh fire under me,” Vivian says. “I’m excited that, as Southerners, we can tell these complex stories through food and culture, and not shy away from our past or present.”

With each episode, Vivian finds that although we’re different, our appetites are very much the same. For example, in North Carolina, Vivian samples the collard sandwich, a staple of Lumbee Indian cuisine, with native Lumbee home cooks for whom Southern hospitality is a fundamental way of life. She also travels to West Virginia to sample the pepperoni roll, a regional convenience food made popular by coal miners. In Charleston, S.C., where rice is king, Vivian enjoys grits and rice middlins with respected Gullah chefs whose cuisine is the backbone of the city’s bustling food scene.

“We are thrilled to have Vivian Howard back on PBS, in her signature fashion, meeting chefs, farmers and friends along her journey to rediscover the American South,” Pamela A. Aguilar, Senior Director, Programming and Development at PBS says. “SOMEWHERE SOUTH is an exciting addition to our slate of programming that will explore rich food traditions and diverse cultures across America.”

“Vivian and I grew up in this very rural, very small, very particular place in the South,” says Hill. “In SOMEWHERE SOUTH, we want to challenge oversimplified concepts about the South, but also push ourselves to tell the story about our region’s history and present with a loving yet critical eye — through food, always through food. And as someone who grew up here, I can learn something, too.”

Vivian Howard and Cynthia Hill have a track record for producing award-winning television. They received a coveted Peabody Award as co-creators of A CHEF’S LIFE in 2013, after the show’s first season. The accolades continued: in 2015, Hill took home an Emmy for Best Directing in a Lifestyle/Travel/Culinary Program; in 2016, Howard was awarded a James Beard Broadcast Media Award for Outstanding Personality/Host; and in 2018, the show received a Daytime Emmy for Outstanding Culinary Program. A CHEF’S LIFE had an average audience of four million viewers per episode.

Beyond her flagship restaurant, Chef & the Farmer, Howard owns the Boiler Room Oyster Bar in Kinston, N.C.; Benny’s Big Time pizzeria in Wilmington, N.C.; and a mail-order bakery business called Handy & Hot. She was recently named The South’s Best Chef by Southern Living magazine and has been a semifinalist six times for the James Beard Foundation’s Best Chef Southeast Award.

SOMEWHERE SOUTH is produced for PBS by Markay Media in association with member stations South Carolina ETV and UNC-TV, with support from the ETV Endowment of South Carolina. The series is created by Vivian Howard and Cynthia Hill with Howard also serving as a producer and Hill as the series director. Pamela A. Aguilar serves as the Executive in Charge for PBS.

About Markay MEDIA
Markay Media is a Durham, N.C.-based television and documentary film production company. Founder and Emmy award-winning director Cynthia Hill is also known for her work on the Emmy-nominated HBO documentary film “Private Violence” and “Road to Race Day,” an eight-part series that delves into the inner-workings of Hendrick Motorsports, one of NASCAR’s winningest teams. Visit markaymedia.com.