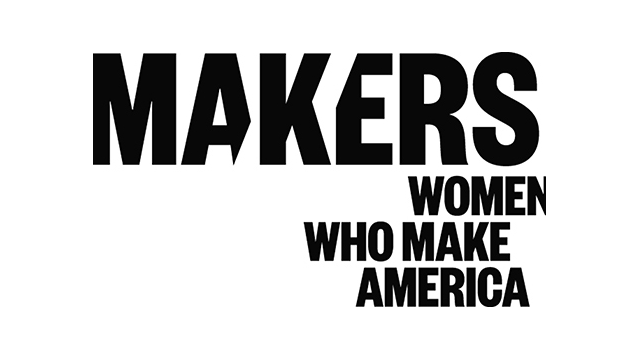 PASADENA, CA; January 21, 2014 – At the semi-annual Television Critics Association conference today PBS announced, in partnership with AOL, six new one-hour documentaries as part of the MAKERS: Women Who Make America initiative. Scheduled to premiere in June and August 2014, the documentaries feature untold stories from an extensive list of groundbreaking women in America. The films, directed and produced by the country’s leading independent filmmakers, build on the multi-platform initiative founded by Emmy Award-winning filmmaker Dyllan McGee, which launched in 2012. In addition to long-form documentaries, the project currently includes a growing collection of more than 200 original video interviews online at MAKERS.com, powered by AOL. The new series expands on the critically acclaimed three-hour PBS documentary MAKERS: Women Who Make America, which premiered in February 2013 and told the story of the American women’s movement over the last half-century. More than 5.2 million viewers tuned into the 2013 MAKERS premiere, and the online videos garnered 58 million views to date.

On January 22, at the closing lunch session of the TCA conference, Kathy Griffin (standup comedian), Valerie Plame (former CIA agent), Peggy Whitson (NASA astronaut) and the producers of MAKERS will introduce television critics to the exciting upcoming series with a panel discussion.

Each of the new documentaries tackles a different sphere of influence, including business, war, space, Hollywood, politics and comedy. Each program will profile prominent women in the field—some known, like comedians Chelsea Handler and Sarah Silverman, and some less known, like Eileen Collins, the first woman to command a spacecraft. These women tell the inspiring stories of their struggles, triumphs and contributions as they reshaped and ultimately transformed the landscape of their chosen vocation.

“The goal of MAKERS is to be the largest collection of women’s stories ever assembled,” said MAKERS founder and executive producer Dyllan McGee. “This new documentary series will show the different ways in which the women’s movement made an impact across industries—sometimes propelling change forward and sometimes creating new challenges to overcome. The stories are heart-warming, funny, and will entertain, educate and inspire.”

“We are proud to bring six new MAKERS documentaries to PBS audiences following the success of MAKERS: Women Who Make America in 2013. Series such as this one shine a light on the women who broke down barriers in vastly different areas to pave the way for others to achieve success in any field,” said Beth Hoppe, chief programming executive and general manager of general audience programming for PBS. “Harnessing the power of both the PBS and AOL platforms will ensure that these stories reach the broadest audience possible.”

“Since our beginnings in February 2012, it's been a privilege for MAKERS.com to honor hundreds of groundbreaking women and their pioneering contributions that have helped shape the world,” said Maureen Sullivan, president of AOL.com and Lifestyle Brands. “In partnership with PBS, the next series of MAKERS will now reach a new and expanded audience and undoubtedly impact an entirely new generation of women, continuing our mission to honor and empower tomorrow's innovative female leaders.”

The MAKERS series is produced and directed by a team of the country’s top independent filmmakers. McGee, founder and executive producer, is an acclaimed producer, known for her work on The African Americans: Many Rivers to Cross (PBS), Emmy-award nominated Gloria: In Her Own Words (HBO), Emmy-award winning Teddy: In His Own Words (HBO), This Emotional Life (PBS) and Oprah’s Roots (PBS). Senior producer Rachel Dretzin is co-founder of Ark Media, whose films have won the Peabody Award, the Robert F. Kennedy Grand Prize for Journalism, the Columbia DuPont Award and multiple Emmys. Dretzin has directed and produced many films for the PBS series FRONTLINE, including Football High, Growing Up Online and Merchants of Cool. She worked with McGee as senior producer on The African Americans, and has also produced for MSNBC’s Edgewise, NPR’s All Things Considered and New York Times Magazine online.

The full line-up of documentaries follows:

MAKERS: Women & War looks at American women’s increasing participation in war—from Vietnam to the present—as nurses, soldiers, journalists, diplomats and spies. Among those featured are Linda Bray, the first woman to lead troops into battle, and Valerie Plame Wilson, whose career was sabotaged after she was “outed” as a high-level spy. Viewers hear from war correspondents Molly Moore, Clarissa Ward and Christiane Amanpour about life on the battlefield. The film shares the stories of military leaders who have broken through gender barriers, like General Angela Salinas, at her retirement the highest ranking woman serving in the USMC, and Vice Admiral Michelle Howard, the highest-ranking woman in the history of the U.S. Navy. Produced and directed by Rachel Grady and Heidi Ewing. The documentary is scheduled to air June 24, 2014.

MAKERS: Women & Space traces the history of women pioneers in the U.S. space program. Some, like aviators Wally Funk and Jerrie Cobb, passed the same grueling tests as male astronauts, only to be dismissed by NASA, the military, and even Lyndon Johnson, as a distraction. It wasn’t until 1995 that Eileen Collins became the first woman to pilot a spacecraft. The program includes interviews with Collins, as well as Sally Ride’s classmates Shannon Lucid, Rhea Seddon and Kathryn Sullivan, and features Mae Jemison, the first woman of color astronaut, and Peggy Whitson, the first female commander of the International Space Station. The hour ends with the next generation of women engineers, mathematicians and astronauts—the new group of pioneers, like Marleen Martinez and Dava Newman, who continue to make small but significant steps forward. Produced and directed by Michael Epstein. The documentary is scheduled to air July 1, 2014.

MAKERS: Women & Comedy tracks the rise of women in the world of comedy, from the “dangerous” comedy of 70s sitcoms like Maude to the groundbreaking women of the 1980s American comedy club boom and building to today’s multifaceted landscape. Today, movies like Bridesmaids break box office records and the women of Saturday Night Live are often more famous than their male counterparts. Contemporary comics, including Chelsea Handler, Mo’Nique, Sarah Silverman, Lily Tomlin, Carol Burnett, Ellen DeGeneres, Jane Lynch and Kathy Griffin, talk about where women started in this competitive, male-dominated profession and where they are determined to go. Produced and directed by Heidi Ewing and Rachel Grady. The documentary is scheduled to air July 8, 2014.

MAKERS: Women & Business tells the story of the exceptional women—past and present—who have taken the world of business by storm. Told by female business leaders themselves, this is a candid exploration of what it takes to make it and a celebration of the extraordinary individuals who, over the course of 50 years, have proven—on Wall Street, in corporate America or business empires of their own—that a woman’s place is wherever she believes it to be. Some of the featured business leaders include Ursula Burns, the CEO of Xerox and the first African-American woman to head a Fortune 500 company; Sallie Krawcheck, Wall Street powerhouse and current owner of the global networking platform for women, 85 Broads; Cathy Hughes, radio and television personality and the first African-American woman to head a publicly traded corporation; lifestyle mogul and business magnate Martha Stewart; and Sheryl Sandberg, COO of Facebook, whose provocative book, Lean In, ignited a national conversation about women, feminism and equality in the workplace. Produced by Leah Williams and directed by Jamila Wignot. The documentary is scheduled to air August 26, 2014.

MAKERS: Women & Hollywood showcases the women of showbiz, from the earliest pioneers to present-day power players, as they influence the creation of one of the country’s biggest commodities: entertainment. Audiences hear from actress-producer-activist Jane Fonda, who at 75 is playing a sharp, sexy and powerful media mogul on the award-winning series The Newsroom; television powerhouse Shonda Rhimes, who created Grey’s Anatomy and Scandal; screenwriter Linda Woolverton, who re-imagined the traditional Disney princess by making Belle (Beauty and the Beast) a self-possessed, strong-willed young woman; writer-director-actress Lena Dunham, who mines comedy and drama gold by exploring what it’s really like to be a young woman today; six-time Academy Award nominee Glenn Close; director Nancy Meyers; and actress Zoe Saldana. Produced by Rory Kennedy with Producer/Director Linda Goldstein Knowlton. The documentary is scheduled to air September 2, 2014.

MAKERS: Women & Politics profiles women in public office who were “firsts” in their fields. From the first woman elected to Congress in 1916 to a young woman running for Detroit City Council in 2013, the documentary explores the challenges confronting American women in politics. Trailblazing leaders like Hillary Clinton, Senator Barbara Mikulski, Olympia Snowe, the youngest Republican woman ever elected to the House of Representatives, and Shirley Chisholm, the first African-American woman to serve in Congress, provide a backdrop for younger women like Rashida Tlaib, the first Muslim-American woman elected to the Michigan House, and Raquel Castaneda-Lopez, who chronicles her run for Detroit City Council. Today’s leaders in Washington, including Elizabeth Warren (D-MA), the first female Senator from Massachusetts, Susan Collins (R-ME), who led the Senate in shaping a deal to end the government shutdown, and Rep. Tulsi Gabbard (D-HI), currently the youngest woman serving in Congress, are also represented. Produced by Rory Kennedy with Producer/Director Grace Lee. The documentary is scheduled to air September 9, 2014.

The MAKERS project was founded by filmmaker Dyllan McGee. Executive Producers are Dyllan McGee and Peter Kunhardt. The documentary is produced by Kunhardt McGee Productions in association with Ark Media, Loki Films, Moxie Firecracker Films and WETA Washington. Major funding provided by: AOL, Simple Facial Skincare and Verizon. Foundation funding is provided by The Charles H. Revson Foundation and the Ford Foundation. Support is also provided by CPB and PBS.

MAKERS is produced in association with the Independent Television Service’s (ITVS) Women and Girls Lead campaign and is presented by WETA Washington, D.C., the flagship public broadcaster in the nation’s capital.

About MAKERS
MAKERS is a landmark television and digital video initiative founded by Emmy Award-winning filmmaker Dyllan McGee (HBO’s Gloria: In Her Own Words) in partnership with PBS and AOL. The project aims to be the largest video collection of women’s stories ever assembled. MAKERS brings together the stories of well-known figures such as Hillary Clinton, Ruth Bader Ginsburg and Oprah Winfrey, with the lesser-known trailblazers such as Kathrine Switzer, the first woman to run the Boston Marathon, and Linda Alvarado, the first female founder of a construction company and a Major League Baseball co-owner. MAKERS draws on the archival and narrative possibilities of a digital video experience to create a new way to explore these women’s stories and highlight a new generation of women whose impact is just beginning to be felt and understood.

About PBS
PBS, with its over 350 member stations, offers all Americans the opportunity to explore new ideas and new worlds through television and online content. Each month, PBS reaches nearly 120 million people through television and over 29 million people online, inviting them to experience the worlds of science, history, nature and public affairs; to hear diverse viewpoints; and to take front row seats to world-class drama and performances. PBS’ broad array of programs has been consistently honored by the industry’s most coveted award competitions. Teachers of children from pre-K through 12th grade turn to PBS for digital content and services that help bring classroom lessons to life. PBS’ premier children’s TV programming and its website, pbskids.org, are parents’ and teachers’ most trusted partners in inspiring and nurturing curiosity and love of learning in children. More information about PBS is available at www.pbs.org, one of the leading dot-org websites on the Internet, or by following PBS on Twitter, Facebook or through our apps for mobile devices. Specific program information and updates for press are available at PBS PressRoom

About AOL
AOL Inc. (NYSE: AOL) is a brand company committed to continuously innovating, growing and investing in brands and experiences that inform, entertain and connect the world. The home of a world-class collection of premium brands, AOL creates original content that engages audiences on a local and global scale. AOL helps marketers connect with these audiences through effective and engaging digital advertising solutions.