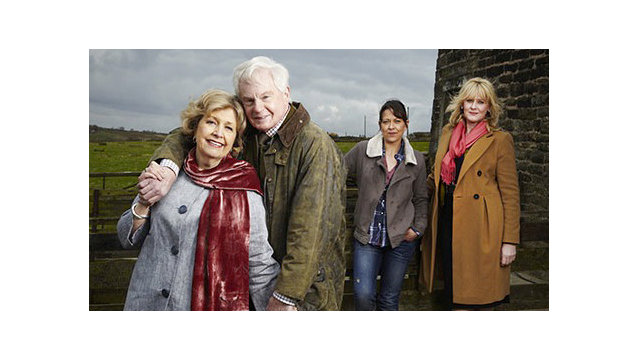 Written by Sally Wainwright (“Scott and Bailey,” “Unforgiven,” “At Home With the Braithwaites”) and directed by Euros Lyn (“Black Mirror,” “Sherlock”) and Jill Robertson (Law & Order: UK), LAST TANGO IN HALIFAX tells the story of love struck septuagenarians Alan (Jacobi) and Celia (Anne Reid) who rediscover their love for each other later in life — 60 years, in fact, after they first met. The heart-warming series, which was named one of the “Best TV shows of 2013” by Variety, was the BBC’s highest rating new mid-week drama of 2012, regularly attracting more than seven million viewers with its captivating mix of effervescent humor and moving drama. Made by Red Production Company for the BBC, LAST TANGO IN HALIFAX is produced by Karen Lewis with Nicola Shindler, Sally Wainwright and Matthew Read as the executive producers.

The six-part series returns as Alan and Celia continue to negotiate family baggage to plan a life together. Having come so close to losing each other forever thanks to Alan’s near fatal heart attack, he and Celia decide to have a romantic secret wedding as soon as possible. But how will their respective daughters react? The uptight Caroline and rebellious Gillian are discovering they actually quite like each other, however Gillian’s need to own up to her night with Caroline’s ex-husband John could jeopardize the soon-to-be stepsisters’ fledgling friendship. As secrets from the past come tumbling out and family members adjust to changing relationships, can Alan and Celia find the long-awaited happiness they deserve?

“LAST TANGO IN HALIFAX captured the hearts of millions of viewers,” said Beth Hoppe, Chief Programming Executive and General Manager, General Audience Programming, PBS. “We are excited to continue the love story between Alan and Celia and work with Red Production and the BBC on an exciting second season. We’re also thrilled that we’ll be giving the acclaimed Derek Jacobi an additional opportunity to shine later in the evening with VICIOUS.”

About Red Production Company
Red Production Company is one of the UK’s leading independent drama producers. Since 1998 Red has worked with the UK’s leading writers including Russell T Davies, Paul Abbott and Sally Wainwright on productions such as “Queer as Folk” (C4), “Clocking Off” (BBC1), “Bob & Rose” (ITV), “Scott & Bailey” (ITV), “Hit & Miss” (Sky Living) and “Last Tango in Halifax” (BBC1).  For more information visit www.redproductioncompany.com, follow us on Twitter, watch us on YouTube or ‘Like’ us on Facebook.