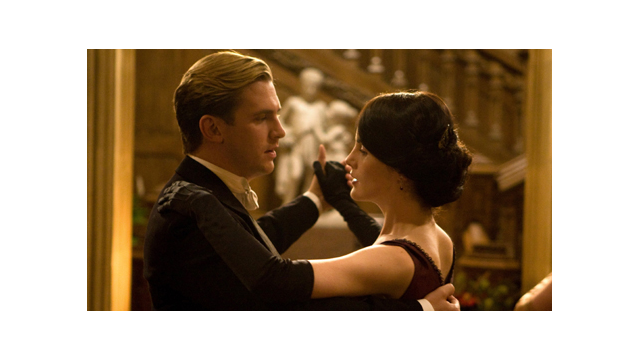 ARLINGTON, VA; February 23, 2012 -- PBS announced today that the conclusion of MASTERPIECE CLASSIC’s breakout hit “Downton Abbey, Season 2” captivated an average audience of 5.4 million viewers, not including those viewing through station replays, DVRs or online streaming (Nielsen Fast National data, 3.5 household rating). The finale’s overnight rating is the highest for a PBS program since the premiere of Ken Burns’s NATIONAL PARKS in September 2009. “Downton Abbey, Season 2,” a Carnival/Masterpiece co-production, consistently drew an audience more than double the PBS primetime average. It exceeded the average rating of the first season of “Downton Abbey” by 25 percent (based on metered market averages).

“‘Downton Abbey’ has become a cultural phenomenon,” said WGBH MASTERPIECE executive producer Rebecca Eaton. “It is so gratifying to see our beloved MASTERPIECE, after more than 40 years on PBS, attracting a whole new audience.”

An ever-expanding number of viewers are accessing “Downton” content online. Full episodes of Season 2 have earned 4.8 million views on the PBS Video Portal, an increase of more than 400 percent compared to the first season. The collection of “Downton” content has earned more than 9 million streams across all platforms from 1.5 million unique visitors since the Season 2 premiere on January 8, and has contributed to the highest days of traffic ever seen on the MASTERPIECE website.

“PBS and our member stations are so pleased that such a large audience is enjoying this great work from MASTERPIECE,” said PBS president and CEO Paula Kerger. “From viewing parties to Twitter mentions, ‘Downton Abbey’ is riding a wave of public enthusiasm, and it’s been wonderful to see so many people discovering public television as a destination for programming that’s smart, distinctive and entertaining.”

Additionally, “Downton Abbey” is drawing a considerably younger audience than the 2010-2011 MASTERPIECE season average. By midway through the second season, female viewers 18-34 were up 251 percent and women 35-49 were up 145 percent. Male viewership in 18-34 and 35-49 has also increased 111 and 84 percent, respectively. The teen audience has grown 88 percent.

On the local level, PBS stations across the country have satisfied their viewers’ craving for all things “Downton” with activities including packed viewing parties and extended community conversations via their social media channels. PBS and MASTERPIECE hosted live Twitter discussions with a number of special guests, including actor/comedian Patton Oswalt, which contributed to 20,000-30,000 messages on Twitter each Sunday broadcast. The conversation continued to generate 6,000-7,000 tweets daily leading to the subsequent episodes.

“Downton Abbey” is a Carnival/Masterpiece co-production.

About MASTERPIECE MASTERPIECE on PBS is presented by WGBH Boston. Rebecca Eaton is executive producer. Funding for MASTERPIECE is provided by Viking River Cruises, with additional support from public television viewers and contributors to The MASTERPIECE Trust, created to help ensure the series’ future.

About WGBH WGBH Boston is America’s preeminent public broadcaster and the largest producer of PBS content for TV and the Web, including Masterpiece, Antiques Roadshow, Frontline, Nova, American Experience, Arthur, Curious George, and more than a dozen other prime-time, lifestyle, and children’s series. WGBH also is a leader in educational multimedia, including PBS LearningMedia, and a pioneer in technologies and services that make media accessible to the 36 million Americans who are deaf, hard of hearing, blind, or visually impaired. WGBH has been recognized with hundreds of honors: Emmys, Peabodys, duPont-Columbia Awards…even two Oscars. Find more information at www.wgbh.org.

About PBSPBS, with its nearly 360 member stations, offers all Americans the opportunity to explore new ideas and new worlds through television and online content. Each month, PBS reaches nearly 123 million people through television and more than 21 million people online, inviting them to experience the worlds of science, history, nature and public affairs; to hear diverse viewpoints; and to take front-row seats to world-class drama and performances. PBS’ broad array of programs has been consistently honored by the industry’s most coveted award competitions. Teachers of children from pre-K through 12th grade turn to PBS for digital content and services that help bring classroom lessons to life. PBS’ premier children’s TV programming and its website, pbskids.org, are parents’ and teachers’ most trusted partners in inspiring and nurturing curiosity and love of learning in children. More information about PBS is available at pbs.org, one of the leading dot-org websites on the Internet, or by following PBS on Twitter, Facebook or through our apps for mobile devices. Specific program information and updates for press are available at pbs.org/pressroom or by following PBS Pressroom on Twitter.