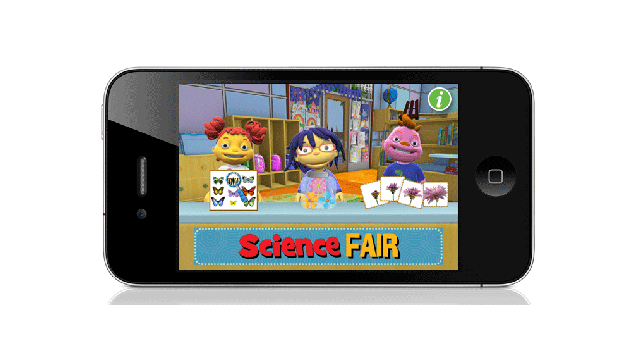 “Today, children are entering kindergarten unprepared to succeed in science and with negative views of the subject, so PBS KIDS is on a mission to inspire a passion for science in kids while they are young, through STEM-focused content on-air, online, and now on mobile devices,” said Lesli Rotenberg, Senior Vice President, Children’s Media, PBS.  “We’re excited about the Sid’s Science Fair App because it helps build core science and math skills – and fosters kids’ excitement in understanding the world around them.”

“We know that touch screen devices are intuitive for young children, so we’re excited to extend SID THE SCIENCE KID onto this platform – enabling kids to engage with the series beyond television and computers,” said Jason Seiken, Senior Vice President, Interactive, Product Development, and Innovation, PBS.  “Our PBS KIDS apps for iPad, iPhone and iPod touch have performed extremely well so far; the PBS KIDS Video for iPad App streamed over 60 million videos in August.1   We expect Sid’s Science Fair to build on this success.”

The SID’S SCIENCE FAIR App is available for $2.99 from the App Store on iPhone and iPod touch or at www.itunes.com/appstore.

Images of the SID’S SCIENCE FAIR App can be found on PBS PressRoom.

To learn about all PBS KIDS apps, visit PBSKIDS.org/mobile.

SID’S SCIENCE FAIR joins PBS KIDS’ STEM-focused line-up of content for kids, including series like SID THE SCIENCE KID, THE CAT IN THE HAT KNOWS A LOT ABOUT THAT! and CURIOUS GEORGE, as well as mobile apps like DINOSAUR TRAIN EGGSPRESS.  PBS KIDS is increasingly serving kids where they live, learn and play – helping to make anytime a learning time on mobile devices, on-air, online and beyond.

About SID THE SCIENCE KID Each episode of The Jim Henson Company’s SID THE SCIENCE KID focuses on a single scientific concept that is presented using Preschool Pathways to Science (PrePS©), a practical science readiness curriculum used in preschool classrooms that was created by cognitive researchers and preschool educators, incorporating lessons learned from developmental research as well as classroom experience.

The award-winning SID THE SCIENCE KID website (at PBSKIDS.org/sid) inspires kids to think like a scientist, with a kid-friendly video player, songs, games, activities, and materials.  Accompanying lesson plans and at-home investigations can be found online at PBSTEACHERS.org and PBSPARENTS.org.

About The Jim Henson Company

The Jim Henson Company has remained an established leader in family entertainment for over 50 years and is recognized worldwide as an innovator in puppetry, animatronics and digital animation. Best known as creators of the world famous Muppets, Henson has received over 50 Emmy Awards and nine Grammy Awards. Recent credits include the Emmy® nominated SID THE SCIENCE KID, DINOSAUR TRAIN, WILSON & DITCH: DIGGING AMERICA and "Pajanimals." Features include "The Dark Crystal," "Labyrinth," "MirrorMask," and "Unstable Fables" and television productions include "Fraggle Rock" and the sci-fi cult series "Farscape." www.henson.com.