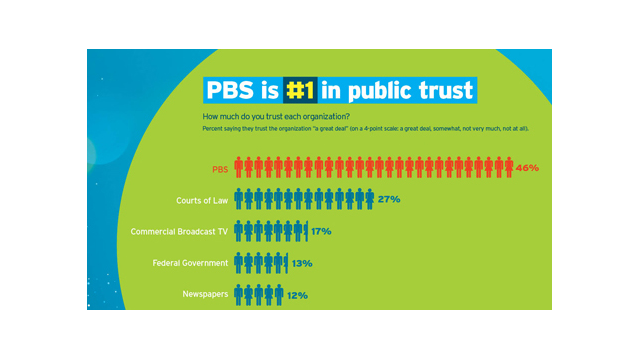 National Research Again Confirms PBS KIDS as the Most Educational TV/Media Brand, the Safest On-Air and Online Destination for Children and the Top Provider of Content That Helps Children Learn Reading, Math and Essential Skills

ARLINGTON, VA – February 21, 2013 – An annual national survey conducted over the last 10 years has consistently confirmed that PBS and its member stations are ranked first in trust among nationally known institutions and are considered an “excellent” use of tax dollars by the American public. The yearly study has also called PBS the most fair network for news and public affairs 10 consecutive times. In the most current round of research, PBS KIDS was named the most educational TV/media brand, the safest destination for children to watch television or visit online, and the top provider of content that helps children learn reading, math and essential skills. In each question, PBS KIDS significantly outscored cable and commercial broadcast television.

The research was conducted in January 2013 by the independent, non-partisan research firm ORC International. Each year, PBS commissions research to measure its performance and value as judged by its most important stakeholder – the American public.

“I am deeply grateful that for a full decade the people of our country have stated that PBS has earned their trust and delivered an excellent value in return on their investment,” said PBS President and CEO Paula Kerger. “The consistent results we find in this national research confirm that the American public see PBS and our member stations staying true to our mission – providing trusted content that can’t be found elsewhere, and treating our audience as citizens, not simply consumers.”

PBS Named the Most Fair Network

More than 4 in 10 respondents (43%) called PBS’ news coverage, investigations and discussions of issues “mostly fair” (when asked to choose among “liberal,” “mostly fair” and “conservative”). PBS outscored all other sources in the “mostly fair” category, including ABC, CBS, NBC, CNN, FOX News and MSNBC.

- More than 4 in 10 respondents (44%) named PBS KIDS the most educational TV/media brand, significantly outscoring the second most highly rated brand, Disney, which was considered most educational by 12%.

- Eighty-six percent (86%) agreed “strongly or somewhat” that PBS “helps children improve their reading and math skills.” Cable and commercial broadcast television received this rating from 51% and 43% of respondents, respectively.

- Eighty-one percent (81%) agreed “strongly or somewhat” that “PBS helps prepare children for success in school and life.” This statement was equated with cable television and commercial broadcast television by 48% and 44% of participants, respectively. - Eighty-eight percent (88%) agreed “strongly or somewhat” that PBS “is a trusted and safe place for children to watch television.” Fifty-one percent (51%) and 49% of respondents agreed with this statement regarding cable and commercial broadcast television, respectively.

- More than 3 in 4 respondents (78%) agreed “strongly or somewhat” that PBS “is a trusted and safe place for children to visit online,” while this statement was attributed to cable television and commercial broadcasters by only 41% and 37% of the sample, respectively.
- Eighty-one percent (81%) agreed “strongly or somewhat” that PBS is “the innovator” in children’s educational media. Forty-seven percent (47%) and 40% of participants also applied this statement to cable and commercial broadcast television, respectively.

Public broadcasting is America’s largest classroom, its biggest stage for the arts and a trusted window to the world, providing a place for all Americans to access new ideas and information to help every citizen build a brighter future.

Full results are available at http://to.pbs.org/most-trusted-2013.

The 2013 Public Opinion Poll was conducted by phone within the United States by ORC International’s DualFrame CARAVAN on behalf of PBS from January 10-14, 2013 among 1,014 adults ages 18 and older. The sample included 512 men and 502 women. The DualFrame CARAVAN is a nationally representative phone survey of adults conducted on both landlines and cell phones.

About PBS
PBS, with its over 350 member stations, offers all Americans the opportunity to explore new ideas and new worlds through television and online content. Each month, PBS reaches nearly 120 million people through television and nearly 28 million people online, inviting them to experience the worlds of science, history, nature and public affairs; to hear diverse viewpoints; and to take front-row seats to world-class drama and performances. PBS’ broad array of programs has been consistently honored by the industry’s most coveted award competitions. Teachers of children from pre-K through 12th grade turn to PBS for digital content and services that help bring classroom lessons to life. PBS’ premier children’s TV programming and its website, pbskids.org, are parents’ and teachers’ most trusted partners in inspiring and nurturing curiosity and love of learning in children. More information about PBS is available at pbs.org, one of the leading dot-org websites on the Internet, or by following PBS on Twitter, Facebook or through our apps for mobile devices. Specific program information and updates for press are available at pbs.org/pressroom or by following PBS Pressroom on Twitter.

About CARAVAN ORC International
ORC International is a leading global market research firm with offices across the U.S., Europe and Asia Pacific. The Company offers a platform of Integrated Intelligence that combines forward thinking methodologies, cutting-edge technology, skilled researchers and in-depth industry experience to provide clients with valuable insight and analysis in the areas of Customer Strategies, Employee Engagement, and Innovation and Growth. ORC International was founded in 1938 and is a founding member of the CASRO, the proud partner of CNN on the CNN|ORC International poll since 2006; and the research firm of choice on the annual NYSE Euronext CEO Report. For more information, please visit www.ORCInternational.com.