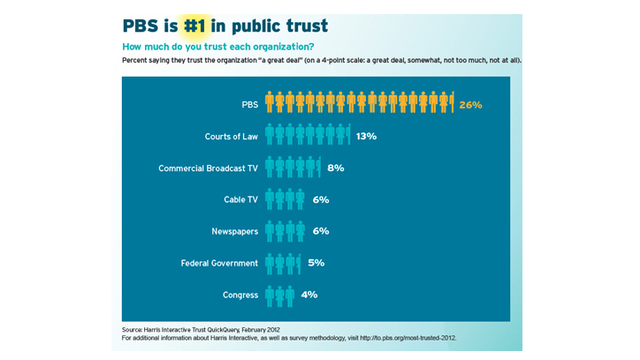 ARLINGTON, VA – February 27, 2012 – Once again, national research has confirmed that PBS is the most trusted institution and is considered an “excellent” use of tax dollars – for the ninth consecutive year.(1)  PBS was also called the most fair network for news and public affairs. In addition, PBS KIDS was named the most educational TV/media brand, the safest destination for children to watch television or visit online and the top provider of content that helps children build reading and math skills.(3)

The research was conducted in January and February 2012 by the independent, non-partisan research companies Harris Interactive and ORC Online Caravan. Each year, PBS commissions research to measure its performance and value as judged by its most important stakeholder – the American public.

“The core of our success and the metrics that truly matter are the trust and value the people of our nation place in PBS, local PBS stations and our collective work,” said PBS President and CEO Paula Kerger. “We’ve had an outstanding year, including an increase in primetime and children’s ratings, expanding our mission through digital platforms, the launch of our station-based classroom resource, PBS LearningMedia, and more. Yet this is the true proof of performance for us.”

PBS Considered Top Use of Tax Dollars
• Only military defense outranked PBS as the best value for the American tax dollar. Over two-thirds of those polled (64%) called PBS an “excellent” (20%) or “good” (44%) use of their tax dollars. Military defense was described as “excellent” or “good” by 73% (31% “excellent” or 42% “good”).
• Nearly 3 in 4 participants (74%) believe federal funding for PBS is money well spent.(3)

PBS Named the Most Fair Network
• 4 in 10 respondents (40%) called PBS’ news coverage, investigations and discussions of issues “mostly fair” (when asked to choose among “liberal,” “mostly fair” and “conservative”). PBS outscored all other sources in the “mostly fair” category, including ABC, CBS, NBC, CNN, MSNBC and FOX News.(2)
• Less than one-third (32%) described PBS as “liberal.” Every other source besides FOX News was considered more liberal than PBS.(2)

PBS Leads in Addressing Important Issues
PBS received high marks for the effectiveness of its programming for children and adults in terms of handling important topics. A majority of respondents believed PBS programming addressed key subjects – from providing access to the arts and improving literacy to providing access to a variety of viewpoints either “very well” or “well.”
•    Provide people access to arts and culture – 67%
•    Promote an understanding of American history – 62%
•    Inform people of America’s ethnic and cultural diversity – 60%
•    Promote an understanding of science and technology – 60%
•    Improve literacy – 59%
•    Provide access to a variety of viewpoints – 54%
•    Inform people of important political and social issues – 51%
•    Inform people about health issues – 51%

About Harris
Harris Interactive is one of the world’s leading custom market research firms, leveraging research, technology, and business acumen to transform relevant insight into actionable foresight. Known widely for the Harris Poll and for pioneering innovative research methodologies, Harris offers expertise in a wide range of industries including healthcare, technology, public affairs, energy, telecommunications, financial services, insurance, media, retail, restaurant, and consumer package goods. Serving clients in over 215 countries and territories through our North American and European offices and a network of independent market research firms, Harris specializes in delivering research solutions that help us – and our clients – stay ahead of what’s next. For more information, please visit www.harrisinteractive.com.

About ORC Caravan
ORC International is a leading global research firm with offices across the U.S., Europe and Asia Pacific. The Company offers a platform of integrated intelligence that combines forward thinking methodologies, cutting-edge technology, skilled researchers and in-depth industry experience to provide clients with valuable insight to help solve their most pressing business challenges. ORC International is a founding member of the Council of American Survey Research Organizations (CASRO) and is a proud partner of CNN on the CNN|ORC International poll since 2006.